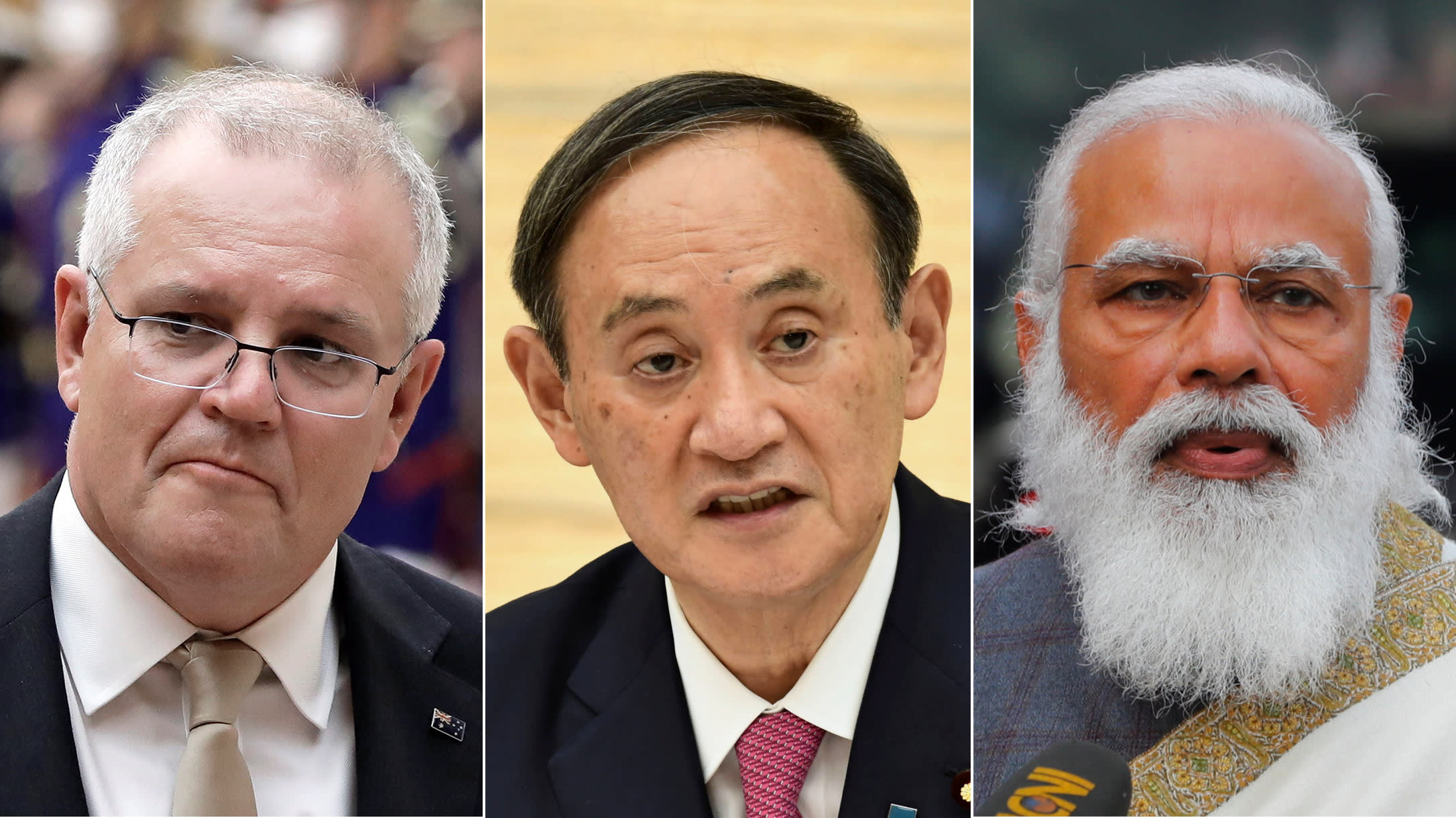 TOKYO -- Japanese Prime Minister Yoshihide Suga's delay in addressing the apparent coup in Myanmar has stood out as key leaders across the Indo-Pacific and the West speak out against the military power grab in the Southeast Asian nation.

Myanmar's military detained de facto leader Aung San Suu Kyi and other high-profile leaders, ostensibly over flaws in the country's November election. The shake-up comes as the administration of U.S. President Joe Biden feels out its global partnerships, including the Quadrilateral Security Dialogue -- a coalition of like-minded countries in the Indo-Pacific, designed to counter China's growing clout across Asia.

"The United States is taking note of those who stand with the people of Burma in this difficult time," Biden said Monday in a statement condemning the military's move. While the statement likely had China in mind, it may have agonized diplomats in Tokyo.

News of Suu Kyi's detention broke early Monday in Japan. Japan's Foreign Ministry throughout the morning said it was still gathering information. Foreign Minister Toshimitsu Motegi finally issued a statement after 4 p.m -- seven hours after the report of the detention -- expressing "grave concern over the situation in Myanmar" and urging the release of Suu Kyi and other leaders.

Chief Cabinet Secretary Katsunobu Kato earlier that day had encouraged parties in Myanmar to resolve the issue peacefully through dialogue, repeating Japan's official line on the country. The government sent an e-mail to Japanese citizens in Myanmar to avoid unnecessarily travel, but did not make any statements explicitly criticizing the Myanmar military over the apparent coup.

Japan's response contrasts with the speedy, often harsher reaction by much of the international community, including the other members of the Quad. The U.S. White House had issued a statement within hours of the incident saying it "opposes any attempt to alter the outcome of recent elections or impede Myanmar's democratic transition."

Australian Prime Minister Scott Morrison swiftly expressed concerns over what he called "disturbing" developments in Myanmar, and the Australian Foreign Ministry issued a statement urging the military "to respect the rule of law, to resolve disputes through lawful mechanisms and to release immediately all civilian leaders and others who have been detained unlawfully."

"India has always been steadfast in its support to the process of democratic transition in Myanmar. We believe that the rule of law and the democratic process must be upheld," India's Ministry of External Affairs said in its statement. Protesters at United Nations University in Tokyo rally against Myanmar's military after it seized power from a democratically elected civilian government and arrested its leader Aung San Suu Kyi on Feb. 1.   © Reuters

Japan was also slow to react to the storming of the U.S. Capitol in January by supporters of former U.S. President Donald Trump. While key world leaders like German Chancellor Angela Merkel and French President Emmanuel Macron quickly slammed the incident through official statements and social media, Suga first addressed it more than a day later, only in response to a reporters' question.

"I hope Americans can come together and move forward" under then President-elect Joe Biden, Suga had said at the time.

In terms of the developments in Myanmar, a Foreign Ministry official said Kato's remarks reflect the government's official stance. The Foreign Ministry also issued its own statement. Still, these remarks do not carry the same weight as a direct statement or Twitter post from Suga.

Some say Suga is wary about commenting on Myanmar's internal affairs, which is not an invalid concern. Unlike the U.S. and Europe, Japan had also maintained relations with Myanmar's military junta before the country's democratic transition. It worries that isolation from the international community could push the country closer to China.

As Myanmar launched its democratic reform in 2010, Japanese companies backed the effort from the economic side by investing in the country. More than 400 Japanese companies are currently operating in Myanmar. Suga may have hesitated in condemning the Myanmar military with those companies and their assets in mind.

Many Asian countries have also not addressed the developments in Myanmar, as they look to balance relations with the U.S. and China.

The Biden administration is looking to see which country will side with Washington and its values. National security adviser Jake Sullivan said last week that the U.S. is looking to form a "chorus of voices" with like-minded allies to stand up for democratic principles.

Still, both the coup attempt in Myanmar and the U.S. Capitol storming are closely tied to these countries' electoral processes, which are critical to any democracy. As a democratic nation itself, Japan faces pressure to respond decisively to any move that undermines democracies around the world.