BANGKOK -- Residents of 44 towns and cities across Myanmar are collecting the scattered empty bullet casings from the streets as a grim reminder of the carnage in their neighborhoods Saturday. Some share photos via social media, holding the casings in blood-stained fingers.

The casings reveal the small-arms firepower that Myanmar's junta unleashed on protesters who dared to fill the streets by the thousands to spoil the pomp of the Armed Forces Day parade in Naypyitaw, the capital, an event marked annually March 27 with the display of heavy weapons including missiles.

But this year's Armed Forces Day became a grisly milestone. Troops with weapons identified by military experts as Chinese-made light machine guns and locally produced semiautomatic rifles killed 114 civilians, some of them children, in the worst bloodbath since Myanmar's Feb. 1 coup.

The trail of bullet casings has not been lost on some Southeast Asian security sources. The weekend's carnage represents an ominous escalation, they told Nikkei Asia, indicating that the Tatmadaw, as Myanmar's defense forces are known, has shed the pretense of pursuing riot control in order to crush the anti-coup protesters and given troops the license to shoot dissenters at will.

This shift in strategy was revealed during a Friday night broadcast on Myanmar Radio and Television, the state-run mouthpiece. An announcement before the regular 8 p.m. news warned that protesters "can be in danger of getting shot in the head and the back" -- the first formal admission by the junta of live fire. 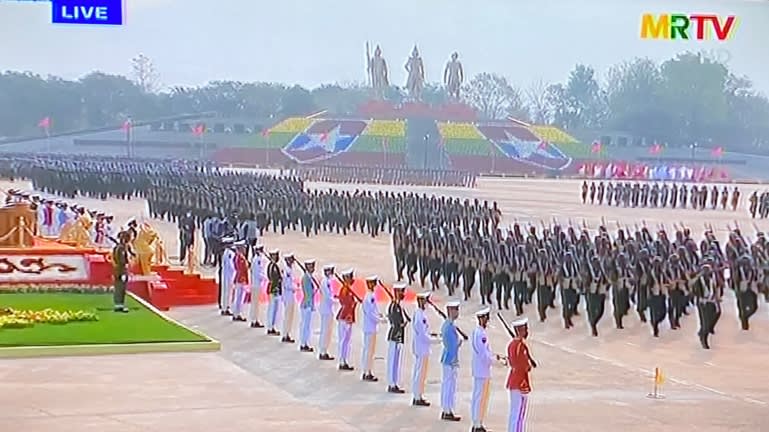 An image from state-run MRTV shows troops on parade in Naypyitaw during Armed Forces Day on March 27.

A statement over the weekend by a respected group of local human rights monitors captured the mood of the rampaging troops.

AAPP puts the mounting death toll at 459 since Senior Gen. Min Aung Hlaing, the junta chief and head of the Tatmadaw, staged the putsch to oust the elected civilian government. The Tatmadaw also has detained 2,559 people, the association said.

Seasoned foreign observers of Myanmar's troops are drawing parallels with military strategies that the Tatmadaw has pursued in its perennial battles with armed ethnic rebels scattered along the Southeast Asian nation's border regions.

At work is "the ruthless efficiency of the Tatmadaw ... applying lessons and capabilities derived from its operational experience in fighting against ethnic armed groups," said John Blaxland, professor of international security and intelligence studies at the Canberra-based Australian National University.

"They are well armed, shoot straight and have considerable unit cohesion," said Blaxland, who once served as the Australian Embassy's defense attache in Myanmar. "These characteristics are brought to bear in the streets of the cities of Myanmar."

International weapons experts reckon that the junta is well stocked with the small arms it has deployed to contain the spreading public tide of anti-coup rage.

"It has enough military equipment to confront protests or even an armed resistance," said Siemon Wezeman, a senior researcher at Stockholm International Peace Research Institute, the Swedish think tank that tracks the global trade in arms and military hardware. "The protests have been dealt with by military armed with small weapons and anti-riot equipment, and beefed up by a few light armored vehicles."

But precipitating a prolonged urban conflict with an armed resistance would not be in the junta's favor, Wezeman said.

"Myanmar has seen several protracted armed rebellions [over] many years, and its military has never been able to win those fights, despite trying hard and brutally," he said. The junta's change in tack -- eschewing riot control measures for spraying peaceful protesters with live ammunition -- has worsened Myanmar's deteriorating diplomatic ties with Washington. The U.S. blasted such excesses last week, making a selective strike against two notorious military divisions of the Tatmadaw in a new round of targeted sanctions.

"The deployment of the 33 LID in Mandalay and the 77 LID in Rangoon have resulted in instances of excessive force, including killings, by security forces," read a March 22 statement by the U.S. Treasury Department, referring to Myanmar's second-largest city and the former name of its largest, now called Yangon.

Global rights campaigner Amnesty International raised the alarm in early March about the infantry troops, easily spotted by the red markings on the upper sleeves of their camouflage uniforms, operating in Yangon, Mandalay and Monywa, where the 101st LID was deployed.

Soldiers from the 33rd LID have been implicated "in war crimes in northern Shan State in 2016 and 2017, and in crimes against humanity against the [Muslim minority] Rohingya in Rakhine State in 2017," Amnesty said. "For years, ethnic minorities -- including the Chin, Kachin, Karen, Rakhine, Rohingya, Shan, Ta'ang and more -- have borne the brunt of horrific violence meted out by the Tatmadaw."

Armed Forces Day showed the extent to which the Tatmadaw is capable of deploying brutal force even on its own people, the majority Burman community, who have risen up by the tens of thousands against the coup. Myanmar political analysts say the bloodbath illustrated the expanding gulf between the junta and the people -- with Min Aung Hlaing telling thousands of uniformed troops at the parade that the Tatmadaw would protect the people, even as armed troops sprayed them with machine-gun fire.

"If [Armed Forces Day] was intended as the supreme national organization, the military leaders and their propagandists have failed irreversibly and spectacularly," said Maung Zarni, co-founder of the Forces of Renewal Southeast Asia, a regional think tank. The Tatmadaw "has lost the entire nation; it had lost even the majoritarian Bama ethnic public."

Two months after the coup, the junta's firepower has left Myanmar teetering toward becoming a failed state.

"It has not been able to get a functioning state up and running, thanks to the sustained civil disobedience movement," Zarni said. "It [also] cannot establish territorial control of the entire country -- as vast swaths of regions are under the country's [more than 20] armed ethnic organizations."