Residents stay home as security forces crack down on demonstrations BANGKOK -- People in Myanmar staged a "silent strike" on Wednesday, staying home to protest the Feb. 1 military coup. Security forces have forced residents to clear away barricades on the streets in Yangon ahead of the Armed Forces Day holiday on March 27.

As the crackdown intensifies, protests in Myanmar have become sporadic. Citizens are resisting through strikes and other forms of civil disobedience.

Activists on social media called for a strike on Wednesday. City Mart Holding, Myanmar's largest supermarket and convenience store operator, and Grab, a big delivery service, were shut down. Many stores in central Yangon, the country's largest city, were also closed.

Wednesday's action is a change in tactics from the general strike in February, when people took to the streets in massive numbers. This time, protesters called for people to "refrain from going out or working," and there were no demonstrations on the streets. Security forces have been shooting protesters to keep people in line. Government opponents are looking for ways to continue protesting while staying safe. 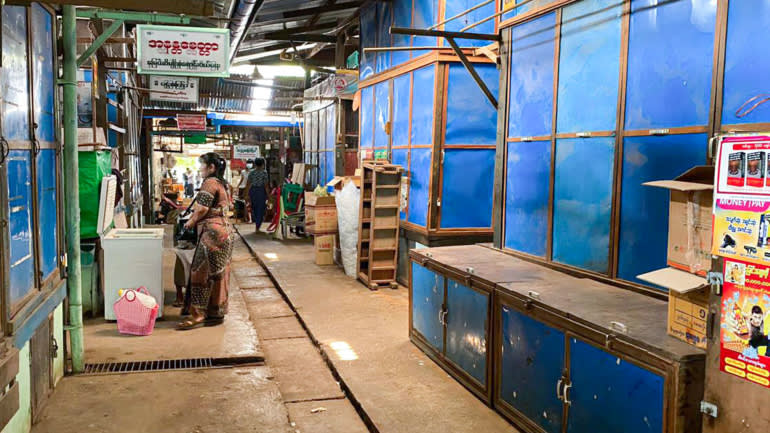 Most shops are closed at a local market in Yangon on March 24.

So far, however, people are undeterred. "We close the store as soon as the security forces get close," said a 65-year-old rice seller in Yangon. "Rice is an easy target for looting."

Videos of security forces attacking and destroying restaurants at random are spreading on social media. According to Irrawaddy, a local media organization, 20 million kyat ($14,100) worth of property belonging to residents of a village southwest of Yangon was seized by security forces on March 18.

Throughout February, protesters marched in Yangon day after day, demanding the release of Aung San Suu Kyi and others detained by the military. Security forces began to forcibly remove the demonstrators, resulting in a large number of deaths. Residents responded by erecting barricades in their neighborhoods, but they only lasted until mid-March.

"If barricades still exist on roads on the next patrol, we will fire indiscriminately on district residents," security forces warned over loudspeakers. A video of the announcement spread rapidly on social media. A state-run newspaper ran an article titled, "Residents and security forces work together to remove road obstacles," but the reality is that authorities forced people to take down the barricades.

By Wednesday, most of the obstacles were cleared away in Yangon. Security forces have repeatedly raided and fired on areas where no demonstrations have occurred.

On March 15, the military declared martial law in some parts of Yangon where there are clusters of factories. In these areas, closed-door military tribunals can hand down death sentences. Migrant workers have started returning to their hometowns and several hundred thousand have left the city, according to local media.