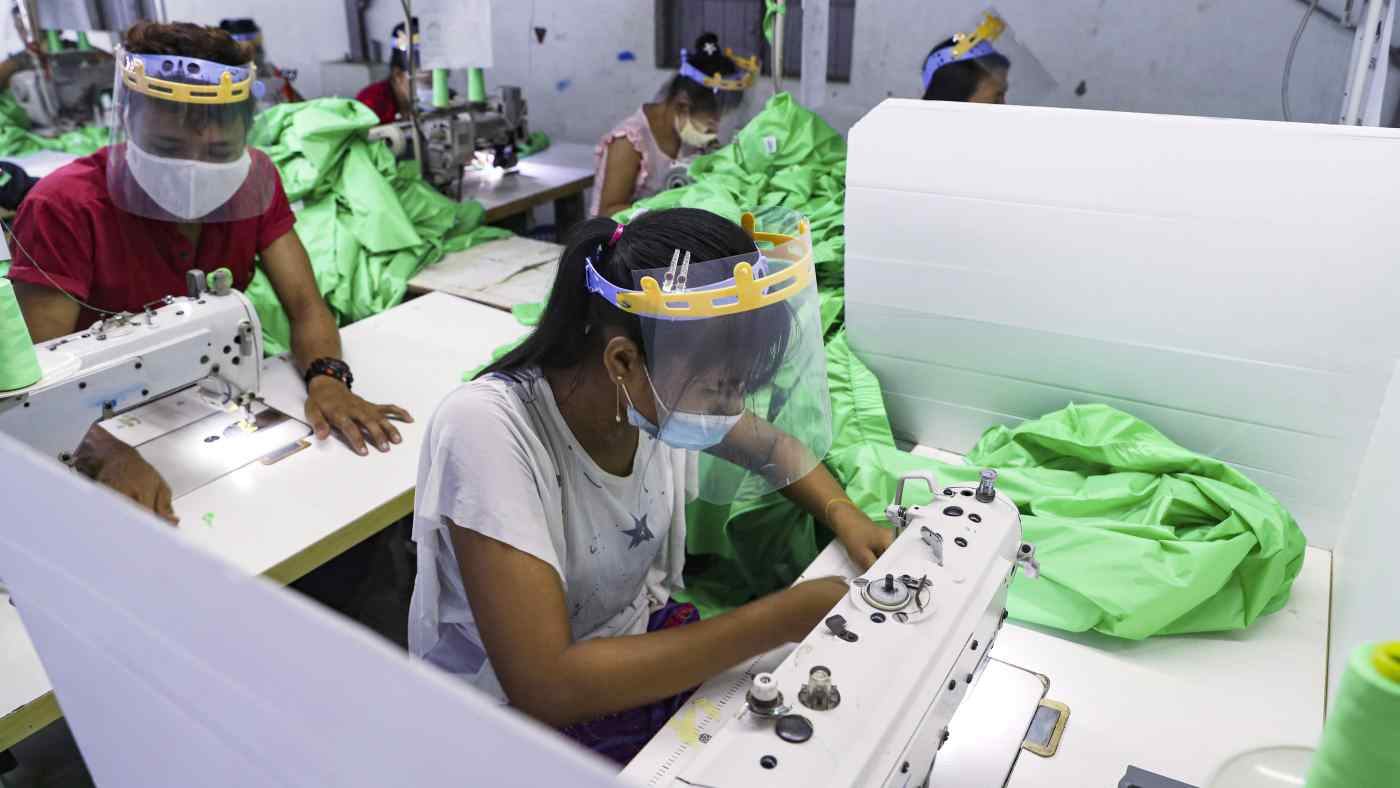 PHNOM PENH -- The military's seizure of power in Myanmar is poised to deliver a major blow to the country's $6 billion garment and footwear industry, threatening a vital source of jobs in a sector already reeling from the pandemic.

A week after elected leaders were detained in early morning raids, experts say the consequences for the important industry could be severe, as sanctions loom and brands review future orders.

"In the short term, our members will be focused on making sure workers are safe, and that their obligations to those workers are being met. Over the medium to long term, this coup will prompt re-evaluation of Myanmar as a stable sourcing partner."

A lot is at stake. Apparel manufacturing in Myanmar has boomed during the past decade as the country returned to quasi-civilian rule and foreign investment poured in. 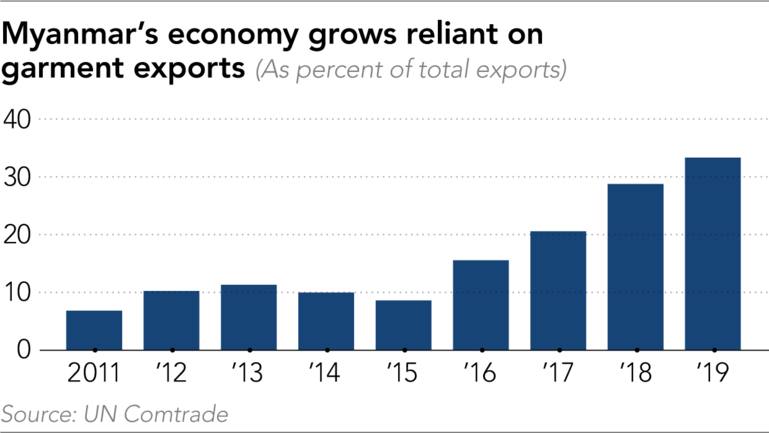 Importantly, it has created formal jobs faster than any other part of the economy, according to the International Labor Organization, which called the industry "pivotal" to development.

"The garment/textile/footwear sector has been one of [the] bright spots for Myanmar in the last decade," said economist Jared Bissinger, who has consulted for the ILO in Myanmar.

"It was one of the biggest drivers of the country's structural transformation, moving people into higher-productivity sectors and out of low-productivity agriculture."

Prior to COVID-19, more than 700,000 people, the majority women, worked in almost 700 apparel factories, according to the EU-funded initiative Smart Myanmar, which promotes sustainable practices in the sector.

That number has since dropped by tens of thousands as factories shut amid the pandemic-induced global turndown. Now, the coup has injected another major source of uncertainty.

Amid calls to join a general strike, thousands of Myanmar's garment workers in major cities have taken part in demonstrations against the military takeover, according to the Clean Clothes Campaign, which has been monitoring events on the ground.

Footage from Saturday shows hundreds of protesters on the front line of a standoff with riot police as a thousands-strong rally attempted to march to Yangon University.

Andrew Tillett-Saks, an organizer working with the labor movement in Yangon, said unions had taken a lead role in mobilizing street protests.

"The sight of industrial workers, largely young, women garment workers, seems to have deeply inspired the general public, broken down some of the fear and catalyzed the massive protests and general strike we are seeing now," said Tillett-Saks.

With events still unfolding, many brands say it is too early to publicly discuss contingency plans. They face a quandary. Remaining engaged in a country under military rule carries risks. Cutting ties will hurt workers.

The Fair Wear Foundation has urged member brands to prioritize workers' safety and ensure their payment.

A representative for British multinational Marks and Spencer told Nikkei Asia it was closely monitoring developments.

Swedish giant H&M said it would "refrain from taking any immediate action with regards to our presence in the country."

"We are prioritizing the safety of our staff as well as supporting our suppliers so they can ensure the safety of their employees," the company said in a statement.

"We are also in dialogue with U.N. agencies, humanitarian organizations, diplomatic representatives, human rights experts and other multinational companies," the statement added. "These consultations will guide us in any future decision in relation to how we as a company can best support positive developments in Myanmar."

One long-term Yangon-based business observer, citing conversations with contacts in the sector, said fashion companies are in "watch and wait" mode, but are likely already rethinking any expansion plans.

"It hits confidence. Made in Myanmar on the coat-hanger had already taken a hit with the Rohingya, and this just adds one more negative," the observer said, referring to the brutal military crackdown against the country's Rohingya minority in 2017, which was described as ethnic cleansing by the U.N.

Industry expert Sheng Lu agreed. Myanmar, Lu said, had grown popular with brands because of its cheap workforce, some higher-quality production capacity and its duty-free access to major markets. Any threat to the latter, in particular, could be devastating, he said.

"Fashion companies give substantial weight to the factors of 'political stability' and 'financial stability' in their sourcing decisions-reputational risk matters," said Lu, an associate professor at the University of Delaware's department of fashion and apparel studies.

"The country's latest political instability will hurt Myanmar's attractiveness as an apparel sourcing base, given many other alternatives out there." Vital to Myanmar's textile boom has been the European Union. The bloc receives more than half of the country's apparel exports, which enter duty-free under the Everything But Arms framework.

The EBA stipulates that beneficiaries should abide by human rights conventions, and Myanmar, which was added to it in 2013, has been under "enhanced monitoring" of its compliance.

While revoking the EBA for violations is a lengthy process, it is not without precedent. Brussels last year partially suspended the EBA privileges of Myanmar's garment export rival Cambodia for suppressing political opponents.

But despite calls from at least one member of the European Parliament to fast-track a review into Myanmar's EBA eligibility, EU diplomats say such a move is unlikely at this time, reported Politico.

Attention, meanwhile, is focused on the U.S., a smaller but fast-growing market for Myanmar, which benefits from some preferences under the U.S. GSP, or Generalized System of Preferences, program.

The garment sector is largely foreign-owned, though the military's sprawling economic interests overlap with some players in the sector.

Peter Kucik, a sanctions expert at Ferrari & Associates, said Myanmar's garment industry would be an "important consideration" for Western policymakers as they mull what measures to take.

Kucik said that while any sanctions had corollary effects on the economy, he expected the U.S. approach this time would be more surgical, rather than the "blunter instruments" used in the 1990s, like import bans.

"There's going to be a lot more thought about making sure that whatever action is taken doesn't broadly impact the Myanmar people," Kucik said.

More complex measures, such as changes to trade preferences, would likely be held in reserve to increase pressure down the track, he added.

"It's not going to be that you throw your hardest punch first," he said. "It's more about taking a look and making sure you have additional moves in mind."

The instability also poses problems for attracting the foreign workers needed for some higher skilled and technical jobs. If visa requirements are toughened, factories may not have the expertise to continue operating, said Bissinger, the economist.

"There's so much uncertainty now it's tough to say where this will go," Bissinger added.

"In the coming months, I think you'll see investments pause and new approvals dry up. Orders will continue to drop. The question is how bad it will be -- both for the sector, but more importantly for the people of Myanmar."