TOKYO -- Human rights groups are heaping pressure on foreign businesses operating in Myanmar, while the U.S. prepares to ramp up sanctions on individuals and companies in response to the military coup.

The United Nations Security Council has also been urged to consider sanctions and other penalties. Thomas Andrews, the U.N. human rights investigator for Myanmar, said on Friday there were "growing reports and photographic evidence" that security forces have acted against international law by using live ammunition against protesters.

Amid public criticism, some global players have already moved to cut ties with Myanmar's military backed companies. One of the most recent came on Tuesday, when Singapore tycoon Lim Kaling announced he was withdrawing from a cigarette joint venture in the country.

"I have decided to exit my investment in Myanmar, disposing of my one-third stake in the joint venture that owns RMH Singapore," the co-founder and director of Hong Kong-listed Singaporean gaming hardware maker Razer said on Tuesday. "I am therefore exploring options for the responsible disposal of this stake."

RMH Singapore owns 49% of Virginia Tobacco Company in Myanmar, the country's top cigarette maker. It is co-owned by military-affiliated Myanmar Economic Holdings, according to a U.N. report in 2019.

Lim's announcement came after an online petition was launched by activist group Justice for Myanmar calling on Razer to remove Lim from its board if he did not act immediately to divest.

But Justice for Myanmar wants RMH Singapore to go further. 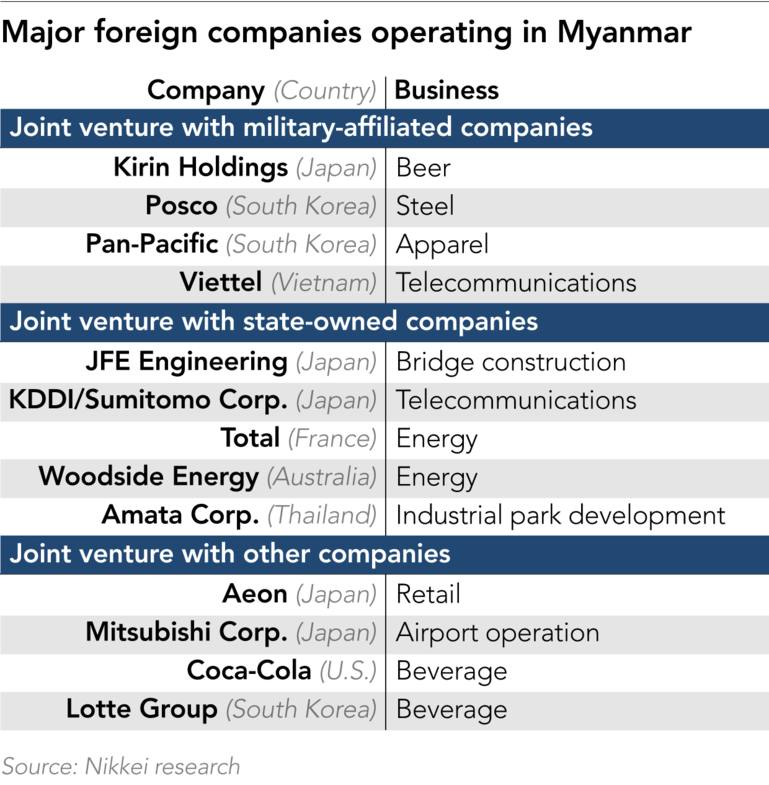 "This does not mean RMH Singapore is ending its relationship with the military regime. More pressure is needed," the group said on Tuesday. "We call on Lim Kaling to stand with the people of Myanmar and persuade RMH Singapore to fully divest from their business with MEHL."

In a similar move, Japan's Kirin Holdings announced last week that it would terminate its two joint ventures -- Myanmar Brewery and Mandalay Brewery -- in Myanmar with MEHL. The brewer strongly criticized the military's actions, saying in a statement they were "against our standards and Human Rights Policy."

Kirin has long been under activist pressure to cut its ties with MEHL, which the U.N. Human Rights Council said in 2019 posed "a high risk of contributing to, or being linked to, violations of human rights law and international humanitarian law," including the Rohingya crisis.

Two South Korean civil society coalitions, together with Justice For Myanmar, filed complaints in November 2020 against five businesses, including Posco, real estate developer Inno Group and apparel maker Pan-Pacific Group, that have commercial ties with the Myanmar military. Those companies have not yet issued statements regarding the coup.

Shigeru Nakajima, a Tokyo-based lawyer who specializes in compliance and risk management, says companies with ties to Myanmar's military face growing reputational risks, as the public is becoming more aware of Sustainable Development Goals (SDGs), which were adopted in 2015 by all U.N. member states.

"Issues regarding human rights and climate change are raising awareness among the general public, and CEOs are urged to catch this emerging voice as a management issue, rather than a social action program," Nakajima said. Activists in the Philippines protest against the Myanmar coup in Quezon City. Foreign companies operating in Myanmar have been under intense scrutiny following the military takeover.   © Reuters

More immediately, U.S. sanctions could force those businesses that have yet to react into action. The measure announced so far are relatively narrow, targeting the leaders of the Feb. 1 coup with immediate sanctions. But experts say that sanctions on military-owned corporations, which appear likely, would impact a wide range of businesses operating in the country.

Meanwhile, foreign companies continue to walk a line between pressure from activists and other members of the public, and the reality on the ground in Myanmar.

Norway's mobile telecom provider Telenor Group, which has been present in Myanmar since 2014 to help build the country's communications network, made an announcement the day after the coup when the military ordered the company to shut its service: "It is important for us to enable open communication lines for our customers in Myanmar." However, the company was forced to comply with orders to temporarily interrupt data services.

"Telenor Myanmar, as a local company, is bound by local law and needs to handle this irregular and difficult situation... Telenor Group views this development with deep concern," it said on Feb. 6. "We have emphasized to the authorities that access to telecom services should be maintained at all times, especially during times of conflict, to ensure people's basic right to freedom of expression and access to information."

Viettel and Japan's KDDI also operate mobile telecom businesses in the country, but Telenor was the only one to publicly express its opinion on the military's orders.