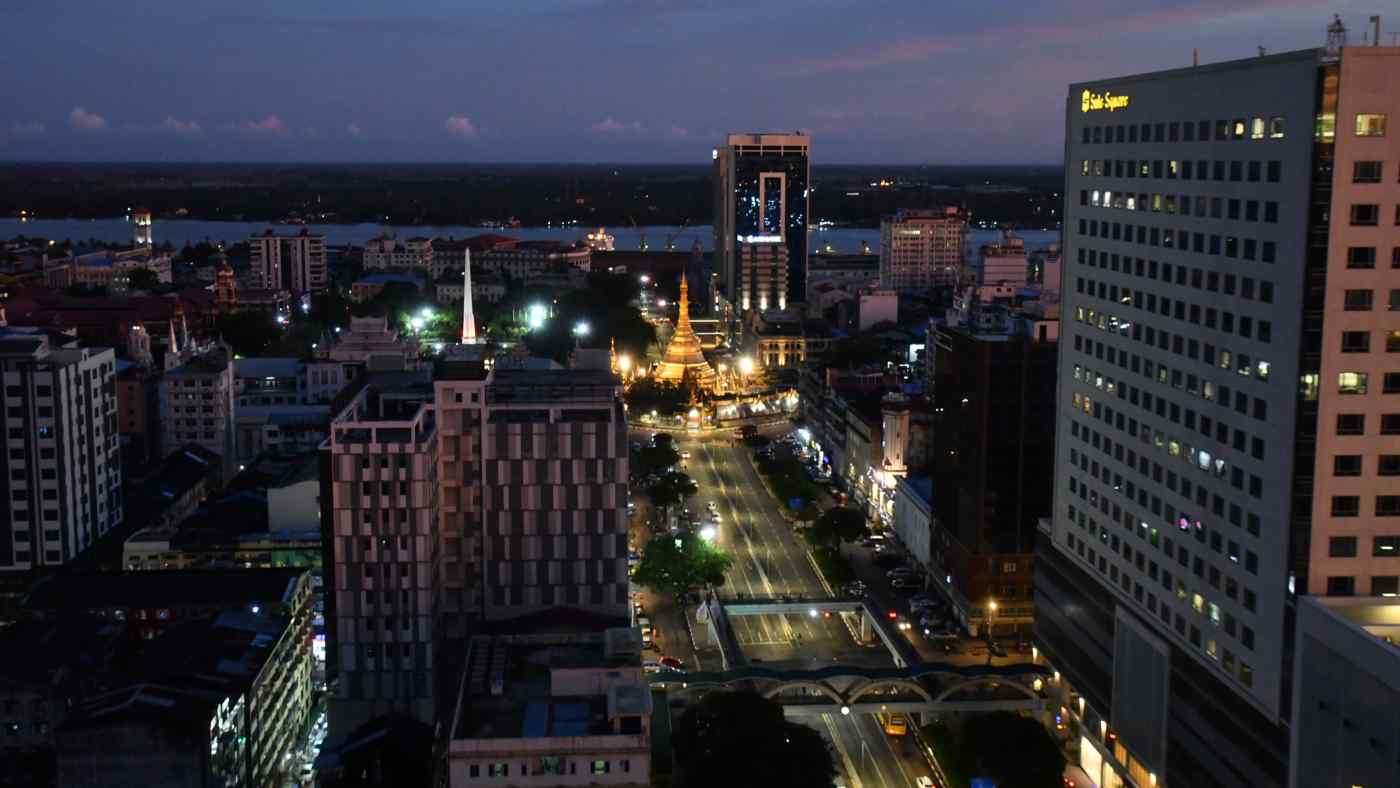 BANGKOK/YANGON -- Myanmar's junta has launched an ambitious scheme to build solar farms that can generate up to 320 megawatts across the heartland regions, areas dominated by the predominantly Buddhist Bamar population, in a major test of investor confidence in the new regime.

The Ministry of Electricity and Energy on May 24 issued a tender to build solar power facilities on 12 sites across central Myanmar that would generate between 20MW and 40MW each, on a build-operate-own basis for 20 years, according to tender documents seen by Nikkei Asia.

As the first major public tender announced since the military's Feb. 1 seizure of power, the move will test the regime's ability to attract local and foreign investment. Given recent sanctions and mounting pressure from democratic governments not to support the junta, as well as heightened market risks, most U.S., European and Japanese investors are expected to stay away from the bidding round.

Industry insiders and analysts are closely watching how Chinese companies, which had dominated Myanmar's energy tenders in recent years, will respond to the offer, though one analyst who monitors Chinese investment in Myanmar suggested that Beijing is discouraging state-owned enterprises from participating in the bid.

The announcement follows on from a controversial 1 gigawatt solar farm tender launched by the National League for Democracy government last year. Chinese bidders and their local partners dominated the bidding and swept up 28 out of 29 projects amid widespread complaints by Western governments and foreign chambers of commerce. 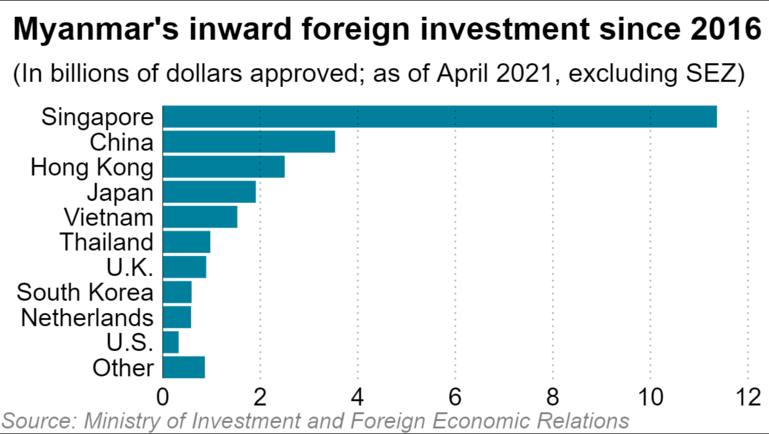 "As the COVID-19 pandemic continues, potential foreign bidders and suppliers are not able to inspect the sites associated with this tender, nor are they in a position to prepare a thorough response to the tender," said a complaint letter from three business chambers addressed to the NLD's energy minister then. The signatories added that bidders who need financing support found the tender arrangement "impossible to support," according to the letter seen by Nikkei. So far, no power purchase agreements have been announced.

This time, bid winners will have 180 days until the commercial operational deadline, according to the tender documents. Of the 12 sites, two are located in Sagaing Region, three in Magway Region, five in Mandalay Region, one each in Bago Region and southern Shan State. Evidence of land acquisition for project areas is needed to bid.

The proposal security is $500,000, passed through state-owned Myanmar Foreign Trade Bank. Companies have until Aug. 11 to submit their bids.

In the previous solar tender, developers were required to have a minimum annual turnover of $20 million over the last three years. For the new bid, the threshold has been reduced to $5 million. But penalties for missing the operational deadline have also increased from $100 per MW per day in the 2020 tender to $2,000 per MW per day. This could amount to as much as $80,000 per day for a project of 40MW capacity and raises the stakes further for any successful bidder due to the increased likelihood of delays amid the country's spreading economic chaos.

The tender comes even as Myanmar is struggling to attract investments amid political turmoil following the Feb. 1 coup. Since then, the regime has announced 25 foreign direct investment approvals worth billions of dollars, without disclosing the details. One developer who took part in the 2020 solar bid said his company has no plans to get involved this time "given the uncertainty in the economy." 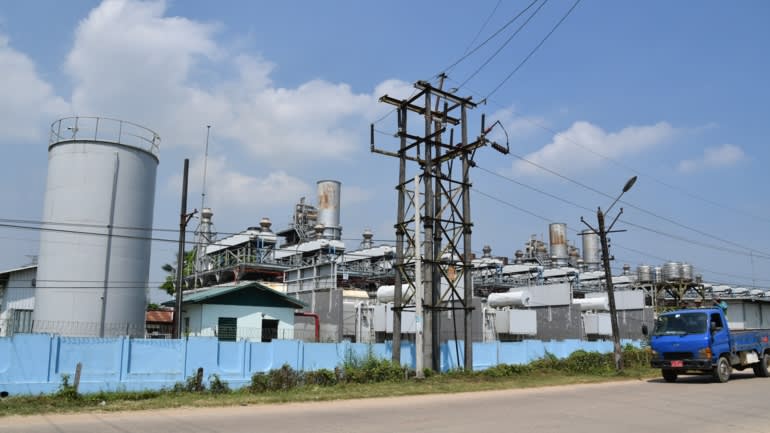 A gas-fired power plant near Yangon, Myanmar in 2018.

The new bid also carries significant political risks. A cabinet member of the parallel National Unity Government said recently that the NUG would publish a "blacklist" of companies that enter new deals under the junta and would not honor the deals.

On top of the political turmoil, industry business executives in Yangon noted that the new tender showed that no lessons had been learned from the 2020 controversy.

A Myanmar analyst working for a Yangon-based foreign renewable energy developer described the tender timeline as "very tight and unrealistic," referring to the six-month deadline.

The need to acquire land when bidding, the same requirement as the previous tender, has added to the difficulties, he said. "There are safety issues for bidders traveling to different areas in the country and government departments might not be fully functioning."

"The first solar tender [in 2020] had its challenges with a limited timeline and now the second one repeats the same problems but with added risks owing to the political crisis," the analyst told Nikkei. "I anticipate considerably higher tariffs this time because solar panel prices are increasing globally and also because of the heightened risks in the Myanmar market."

Citing unnamed bidders who took part in the last tender, Yangon-based China Myanmar Economic Cooperation and Development Promotion Association, a nongovernment group, said in an online post that the ministry had told those developers the tender no longer required bidders to have any experience in solar energy.

However, another local energy developer who decided not to bid said, "The deal structures are still not simple, as bidders need to acquire land." He also cast doubt on the feasibility of high tariffs, given Myanmar's economic outlook and political instability.

The junta made the move because contractors failed to pull off the solar projects agreed last year under the NLD administration, the Yangon-based developer added.

Before COVID-19, the NLD government estimated that Myanmar's power demand was growing at 15-19% per year, but a sharp drop in electricity demand due to the pandemic and the coup's economic disruption has raised fresh questions over the commercial viability of any new energy investments. While more than 850 people have been killed and nearly 6,000 arrested since Feb. 1, the country's power demand has plummeted amid a deterioration in business activity.

Casting doubt on the circumstances of the tenders, a former adviser to the NLD government said: "The solar tender doesn't address any of Myanmar's immediate needs, such as food, medication or basic civil liberties. What it does try to do is legitimize the State Administration Council [junta] and could provide foreign exchange to the military, which they need to finance the aircraft, ammunition and other equipment they are using to attack their own people around the country."