BANGKOK -- The skies above Myanmar's hinterlands have thundered from Russian-made jets over the past three weeks as they bomb strongholds of ethnic rebels along the country's borders with China and Thailand. On other nights, witnesses say, Russian-made attack helicopters shattered the silence and lit up the sky.

In the country's north, the Kachin Independence Army has borne the brunt of the bombing raids this week, according to local media reports. The military, which is also known as the Tatmadaw, is using ground forces and airstrikes to reclaim the strategic Alaw Hill near the Chinese border in Kachin State, which was seized last month by the KIA, The Irrawaddy news website reported.

The Myanmar military's use of such heavy firepower in rural areas controlled by various armed ethnic groups is meant to send a clear message to all that live there: The junta is in control and any resistance to the coup of Feb. 1 will be met with extreme force.

"The civilians feel terrorized by the airstrikes," the source told Nikkei Asia, speaking from KNU-held territory near the Myanmar-Thai border. The use of heavy force on rebel-held areas adds to an increasingly brutal campaign being waged by the military and its chief, Senior Gen. Min Aung Hlaing, to suppress a countrywide protest against the coup in the Southeast Asian nation. More than 700 people have been killed by security forces, according to the Assistance Association for Political Prisoners, a network of local human rights monitors. The death toll includes victims who died from the airstrikes.

The aerial strikes over two days in late last month "marked a new turn from the warfare of internal conflict that has been waged, where the fighting in the Karen area has been limited to a ground conflict," the KNU source said.

The scale of the airstrike took the KNU by surprise, he admitted, referring to the jet fighters and helicopter gunships that first struck during the night of March 27, then kept coming back over the following days.

The airstrikes were in response to Karen National Liberation Army forces overrunning a military outpost on March 27, reportedly killing 10 soldiers. The attack -- while the junta marked the annual Armed Forces Day with a military parade in Naypyitaw, the capital -- signaled a further nod by the ethnic armed group to close ranks with the anti-coup rage sweeping across the country.

The planes "dropped nine bombs and fired automatic guns from the aircraft," the Karen Peace Support Network, a humanitarian group, said in a statement.

Analysts say that the junta's turn toward its air power to crush resistance in ethnic areas has broader aims. For one, it is telling the KNU to "back off on its anti-coup rhetoric" and its support of the shadow government -- the Committee Representing Pyidaungsu Hluttaw -- that has begun to take shape, says Mary Callahan, author of "Making Enemies: War and State-building in Burma."

But the military also has other ethnic armed organizations in its sights, added the professor of international studies at the University of Washington in the U.S.

"The escalation to air attacks is a message to them that the protests in the central Bamar heartlands should not be taken as a sign that the Tatmadaw is weak," she said. "It may also be a reminder to infantry soldiers in the Tatmadaw that Naypyitaw has their backs."

The sustained public outrage against the coup has brought the ethnic armed groups into the political calculus. Their combined strength accounts for an estimated 100,000 armed troops. The military has 350,000 in its ranks, making it the second-largest army in Southeast Asia.

Not surprisingly, security analysts and diplomats have kept tabs on the statements from this quarter, including the decision by 10 separatists groups to break a pact to hold cease-fire talks that would have ended decades of conflict. But not all armed militias have followed the latest route of the KIA and KNU to relaunch insurgencies.

"There is no record of the EAOs [ethnic armed organizations] having anti-aircraft weapons," the diplomat told Nikkei Asia. "The Tatmadaw has air superiority and a psychological edge."

The only exception is the United Wa State Army, the largest and best-equipped ethnic military force that controls its stronghold with its estimated 25,000 troops along the Myanmar-China border. It has Chinese-supplied anti-aircraft missiles in its arsenal, but "the Chinese sold them on condition they will not be given to other EAOs," said the diplomat. "The UWSA, for now, has stayed above the fray from the post-coup turmoil."

These Chinese ties have not been lost on the military. 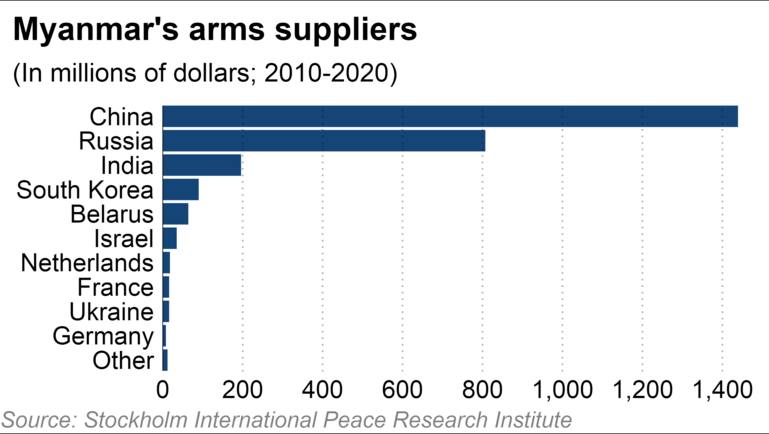 "China is known to actively support the United Wa State Army across from China's Yunnan province and therefore the Tatmadaw acts warily around them," said John Blaxland, professor of international security and intelligence studies at the Canberra-based Australian National University. "Other [ethnic armed groups] face constraints in [weapons] supply."

The military's air superiority has expanded thanks to arms deals with Moscow. Myanmar has looked to Russia mainly for combat aircraft and helicopters, notes the Stockholm International Peace Research Institute, a Swedish think tank that tracks global arms trading. It has bought 30 MiG-29 fighter jets and 10 Mi-24 and Mi-35P combat helicopters. It is awaiting a fresh delivery of six Sukhoi-30 fighter planes. 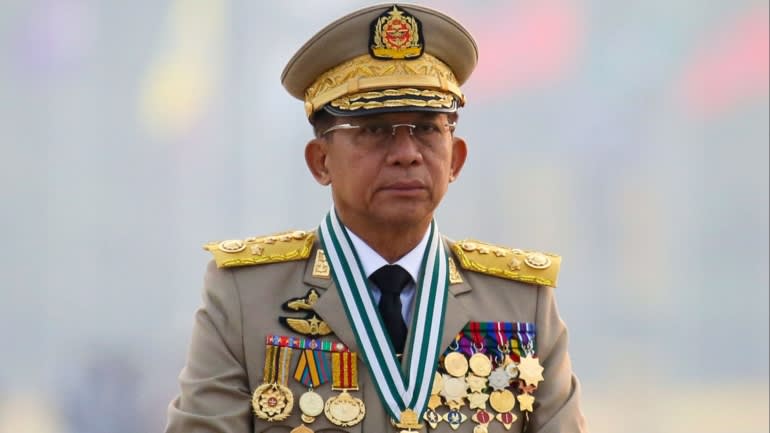 The military's shopping spree came as Min Aung Hlaing, the junta chief, cultivated defense ties with Moscow over the past decade to avoid dependence on China, Myanmar's largest weapons supplier. Russia holds a veto in the United Nations Security Council. Increased ties with Moscow would help the junta to broaden its defense and diplomatic options, analysts say.

The last time Russian jet fighters were used was during a conflict between the military and the Arakan Army, an ethnic rebel group that operates in the western Rakhine State, through 2019 and till late last year, when a truce was struck.

"Facing an extremely hostile ground environment, the military is making significant use of heavy artillery and airpower, including helicopter gunships and fixed-wing aircraft, to repel Arakan Army attacks," the International Crisis Group, a Brussels-based think tank, revealed in a report last year on the conflict.

But as it faces anti-coup discontent in the country's ethnic areas, home to a third of the country's population, the military is not ruling out other tried tactics, such as its use of armed groups as proxies. A clash in the western region of Sagaing, close to the Myanmar-India border, this month exposed this alliance.

According to Asian military intelligence sources, the Tatmadaw had roped in a separatist rebel group operating in India -- Manipuri rebels known as Meitei -- to hop across the border, don Myanmar military uniforms and storm an anti-coup protest camp with automatic weapons, resulting in 12 civilian deaths.

"It was a deal struck by the local Tatmadaw commander," an intelligence source told Nikkei. "Other local commanders are trying to reach out likewise with armed groups in other ethnic areas to counter the spread of anti-coup anger."