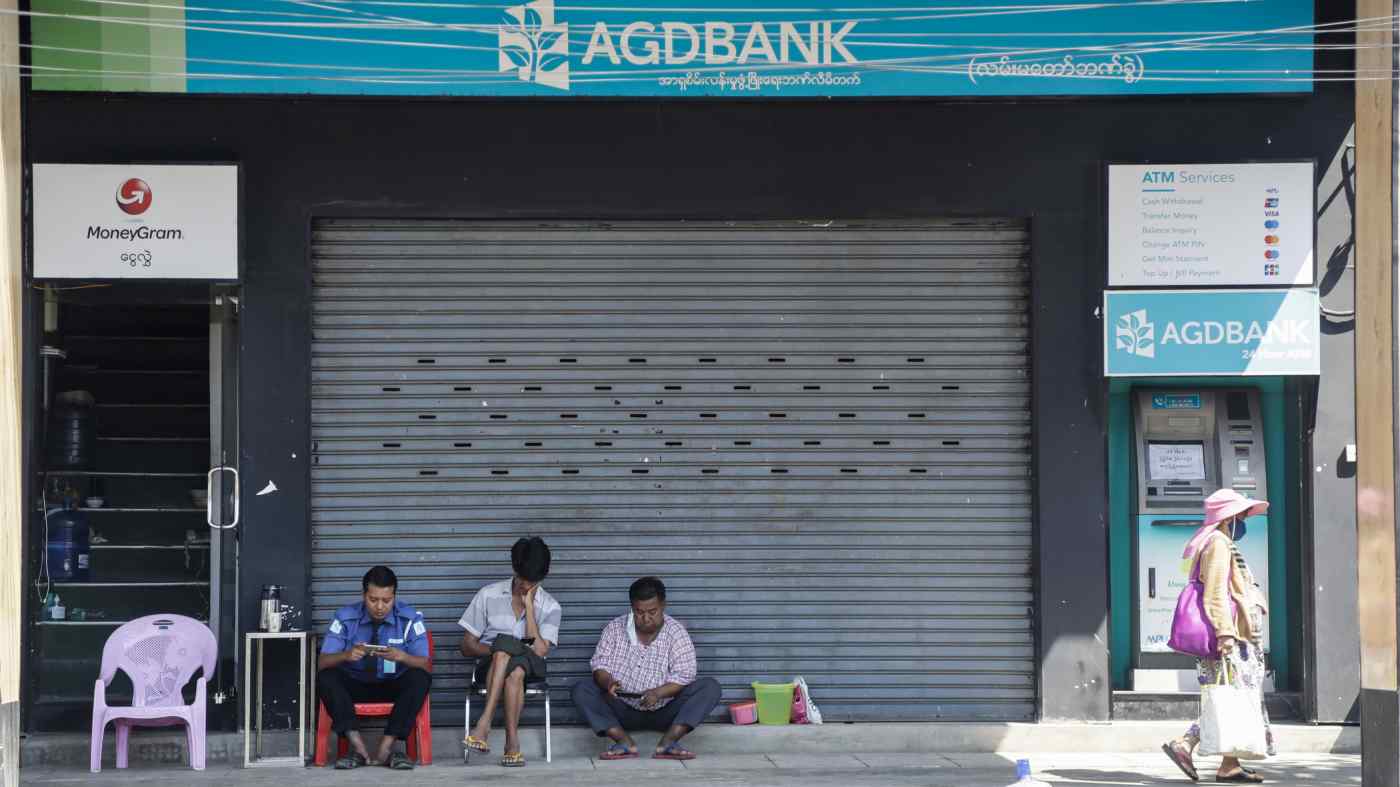 YANGON/BANGKOK -- Myanmar's military government is increasing pressure on private banks to reopen by threatening the forced transfer of private deposit accounts to military-controlled banks, a move that would hasten a reversal of the liberalization begun under former President Thein Sein a decade ago.

In a separate order issued through the Central Bank of Myanmar on March 12 the junta has ordered commercial banks to divulge details of accounts and money transfers dating back to 2016 of domestic and international nongovernmental organizations operating in Myanmar.

The orders, which were confirmed by senior executives at three of Myanmar's commercial banks, highlight the growing push by the junta to build a case against the government of imprisoned State Counselor Aung San Suu Kyi, and bolster its narrative of foreign interference in Myanmar's internal affairs.

A related order also issued last week targets four specific NGOs, including Oxfam, Open Society Myanmar and the International Foundation for Electoral Systems, requesting all banks holding accounts for any of the four to undertake a financial account audit and hand over the details.

Myanmar's overcrowded domestic banking sector, with more than 30 banks, including about 13 government or semigovernment banks, has been reeling from the impact of the Feb. 1 coup as employees joined the swelling civil disobedience movement. Staffing levels, estimated by several senior bankers at 20% to 30% of normal, prompted most to close branches, although many have tried to keep ATMs operating. 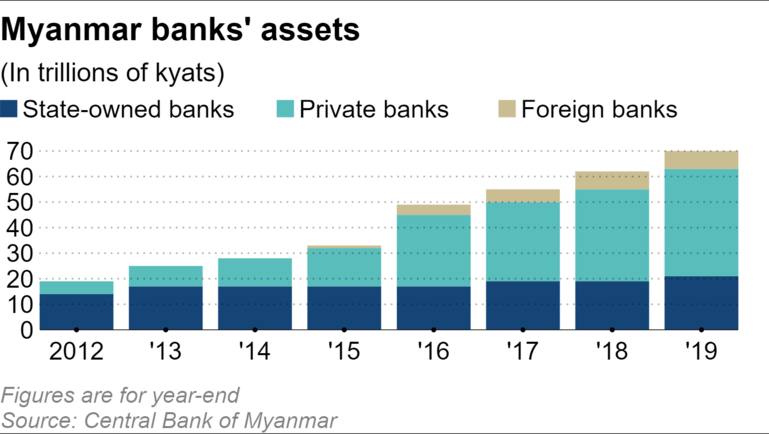 One senior banker said the commercial banks had also suffered "social shaming" by protesters on social media after the banks asked staff to come back to work. The executive complained of being "pressured by all sides" -- by the civil disobedience movement for trying to reopen, and by the regime and central bank, which are threatening to seize their deposits if they stay closed.

The order to reopen bank branches suggests a growing sense of alarm in the junta, known as the State Administration Council (SAC), at the country's economic slide, fueled partly by paralysis in the financial system.

The memo, addressed to the central bank by the permanent secretary of the SAC, further threatens the banks: "If the private banks do not reopen, the Central Bank of Myanmar will not take any responsibility for the consequences." All three banks named in the memo are either state-owned or semiprivate banks under military-linked conglomerates, Myanma Economic Holdings and Myanmar Economic Corporation.

A screenshot of the document was circulated on social media from Friday and was verified on Monday by bankers contacted by Nikkei Asia.

Another senior banking executive said the message from the regime "is very clear, but what we can do about it is not." The banking executives said that persuading striking workers to return to their jobs could be "close to impossible." Myanmar's biggest private bank, KBZ, which has about 15,000 employees and operates about 500 branches around the country, suffered "naming and shaming" on social media last week for issuing an appeal to employees to return to work.

Another bank executive told Nikkei that all the commercial banks had been expecting the regime to "take some kind of actions forcing the banks to reopen," but the prospect of a forced transfer of deposits had come as a shock. "We think it may be just a ploy to force banks to open, but we can't discount the threatened consequences. We don't have legal recourse under emergency rule," he added.

The prospect of what would amount to semi-nationalization of part of Myanmar's banking system, on top of the ongoing financial system paralysis, risks shattering public trust in the banking sector and could trigger a run on the banks, some of the executives warned. A former adviser to the National League for Democracy (NLD) government told Nikkei that any transfer of deposits to state-owned MEB and the military-owned banks "would further impair bank balance sheets."

Fears of a potential bank run surfaced a year ago with the outbreak of COVID-19 in the country. According to a 2020 report by the U.K.-based International Growth Centre, Myanmar's experience with two major banking collapses in the last three decades made a bank run relatively likely if a spiral of food shortages or forms of social breakdown took hold because of COVID-19.

The United Nations World Food Program warned on Monday that rising food and fuel prices together with "near paralysis" of the banking sector are worsening the humanitarian crisis as the current political unrest starts to impact supply chains and markets.

The state and military-owned banks named in the memo as recipients of any forced transfer of deposits from private banks could not be reached for comment. Aung San Suu Kyi's government announced in January 2020 that it intended to modernize and merge the four inefficient and loss-making state-owned banks.

"The transfer of deposits, if implemented, would [amount to] forced confiscation of assets by the military. If it happens, the measure would recapitalize [state-owned] MEB and the military-owned banks, while harming the private banks. Is the military trying to provoke a full-scale financial crisis?," the former NLD government adviser told Nikkei.

Many of Myanmar's banks were already in a fragile state before the crisis and did not meet international capitalization standards, meaning they did not have enough cash to survive a severe crisis, noted the former adviser.

"Now, with the coup and COVID-19, borrowers are having trouble repaying their loans to the banks and we are seeing a downward adjustment in the banks' main source of collateral, real estate, especially in Yangon. On top of this, people are trying to withdraw their deposits from several banks. Even before the SAC directive, the banking sector was in deep trouble."

Most of Myanmar's private banks have been unable to operate normally since mid-February, when the nationwide civil disobedience movement and calls for general strikes gained momentum.

Only digital banking services and ATM networks are currently operational, but banks are having difficulty replenishing ATMs with cash amid the turmoil. On March 1, the central bank halved the limits on cash withdrawals from ATMs to just 500,000 kyats ($350) per day, and reduced corporate account withdrawals to the equivalent of $14,000 per week. Employers told Nikkei that the inability to withdraw funds has made it extremely difficult to pay staff.

As cash runs short and banking operations remain limited, a particularly urgent issue is payroll transactions, the bank executives said. Some international and local companies were forced to delay salary payments for February due to difficulty in getting cash, as well as in making bank transfers. "Some might be able to manage to pay the salary for this time, but not sure for the next time [for March]," a manager at a Japanese company said.

The closure of the banks humiliates the military's commander and junta chief Min Aung Hlaing, who stressed the importance of economic stability straight after the Feb. 1 coup announcement.