Protesters have turned out in strength over the weekend in Yangon, Myanmar's former capital. There have also been anti-junta gatherings in Naypyitaw, the capital, Mandalay, the second largest city, and Mawlamine, a port in the country's southwest. (Photo by Yuichi Nitta)
YUICHI NITTA and YOHEI MURAMATSU, Nikkei staff writersFebruary 7, 2021 13:43 JSTUpdated on February 7, 2021 18:01 JST | Myanmar
CopyCopied

YANGON/BANGKOK -- Tens of thousands of defiant protesters marched in the streets of Yangon for a second day almost a week after the military arrested the country's elected leader, Aung San Suu Kyi.

Reuters news agency reported that tens of thousands of marchers were calling for the release of Suu Kyi in the largest demonstration seen in the former capital since 2007. At that time, Buddhist monks were at the forefront of a pro-democracy uprising triggered by sudden hikes in fuel prices.

The internet remained blocked for most of Sunday after the communications ministry earlier in the week ordered telecom operators to shut down services. Facebook, Instagram and Twitter and other popular social media platforms are all unavailable until further notice.

At about 2.15 p.m. there were tentative signs that the internet was being restored. About 15 minutes later, Telenor Myanmar tweeted that it had restored its services.

The social media block had not stopped people from rallying, with people communicating with each other by phone. Thousands of protesters rallied in central Yangon on Feb. 7 to demand the release of Aung San Suu Kyi after her arrest by the military on Feb. 1. (Photo by Yuichi Nitta)

The Japanese embassy warned of "unforeseen circumstances" there and urged its nationals to stay away from the area, where as many 10,000 were predicted. The embassy also said the demonstration in front of City Hall, beside Sule Pagoda, was expected to gather steam at 1 p.m.

Red ribbons the color of Aung Sang Suu Kyi's party, the National League for Democracy, were distributed on the streets. A 42-year-old man told Nikkei Asia: "I will fight for democracy, until the dictatorship falls. I am not afraid of getting arrested."

State-owned television and newspapers have made no mention of any protests, but independent newspapers reported on Sunday that the previous day's protests attracted thousands, and that there was also protest activity in Naypyitaw, the capital, and Mandalay, Myanmar's second largest city.

Some 200 factory workers found ways to rally in Yangon on Saturday at 11:00 a.m. and were soon joined by other residents. 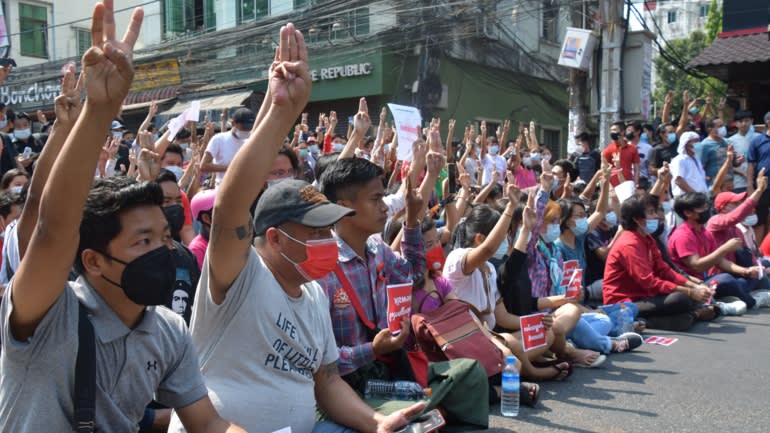 Some anti-military protesters in Yangon have adopted the three-finger salutes inspired by the Hollywood film The Hunger Games, and recently used at student protests in Thailand. (Photo by Yuichi Nitta)

A female student who joined the protest on Saturday told Nikkei: "The military is acting only in its own interests. They should release Aung San Suu Kyi as soon as possible."

In central Yangon on Saturday, riot police with shields lined up 30 meters in front of the protesters. Locals offered them food, water and flowers in an effort to bring them over and as proof of their peaceful intent.

In the first five days following the coup, people were more cautious about rallies, but the internet block riled many. Previously, they mainly expressed discontent by banging pots and pans and honking car horns. Some medical personnel also practiced civil disobedience.

"Initially, people expected the military to respond to the people, then they took away the internet," a male student told Nikkei. "That is what sent people out on the streets."

"Suu Kyi is a leader that everyone respects, and we cannot accept this situation," a protester in Yangon on Saturday told Nikkei after the crowds dispersed. "In a democracy, they need to listen to the people's voices."