The market swoon comes in the wake of a military coup that began on Monday with the detention of State Councilor Aung San Suu Kyi and other civilian leaders. Investors are concerned that the U.S. and Europe will reimpose economic sanctions on Myanmar, sapping foreign direct investment and slowing growth.

Trading on the bourse was suspended Monday and Tuesday, as poor network connections prevented securities companies and banks from accessing the exchange's trading and settlement system. The military jammed communications early Monday morning as they staged the coup. Connections were restored by Tuesday.

The Yangon Stock Exchange is a new bourse, founded in March 2016. Only six companies are listed, giving it a total market capitalization of 676 billion kyat ($508 million) as of the end of Wednesday trading. The market is tiny, less than a thousandth the size of regional peer, the Stock Exchange of Thailand. 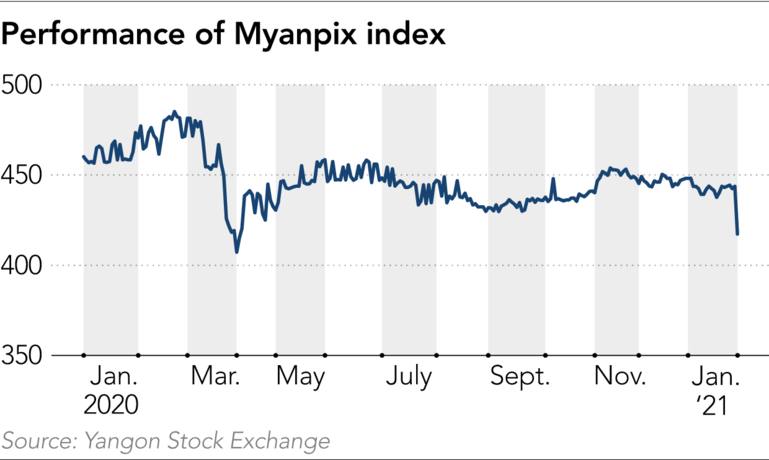 Two companies led the plunge. Myanmar Thilawa SEZ Holdings recorded the largest drop among the six, falling 10.3%. The company was set up to back the Thilawa Special Economic Zone project, which aims to build a modern industrial estate with logistics and power generation facilities.

International market researchers expect the coup to hit the Myanmar economy hard. Fitch Solutions Country Risk & Industry Research said it cut its economic forecast for Myanmar to 2.0% growth for the year ending September 2021, versus its previous forecast for 5.6% growth.

"Myanmar's growth outlook depends heavily on a pipeline of key infrastructure projects and foreign direct investment, which could be delayed or canceled altogether if sanctions are implemented and if foreign entities decide to pull the plug amid elevated political risks," Fitch said. The company also downgraded Myanmar's growth forecast for the year ending September 2022 to 2.0% from 6.0%.

Thailand's largest industrial estate developer, Amata Corporation, suspended its $1 billion project in Myanmar due to fears the coup and possible international sanctions will scare off investors. Amata had just begun construction on the complex outside Yangon in December.

U.S. President Joe Biden warned that sanctions could be on the table in response to putsch. Investors in Myanmar Thilawa SEZ Holdings have received a reminder of the possible diplomatic and economic consequences of the military takeover.

First Myanmar Investment, a holding company that operates in sectors ranging from financial services and real estate to health care and tourism, fell 7.2%. The company has a unit that is developing the Thilawa Special Economic Zone.