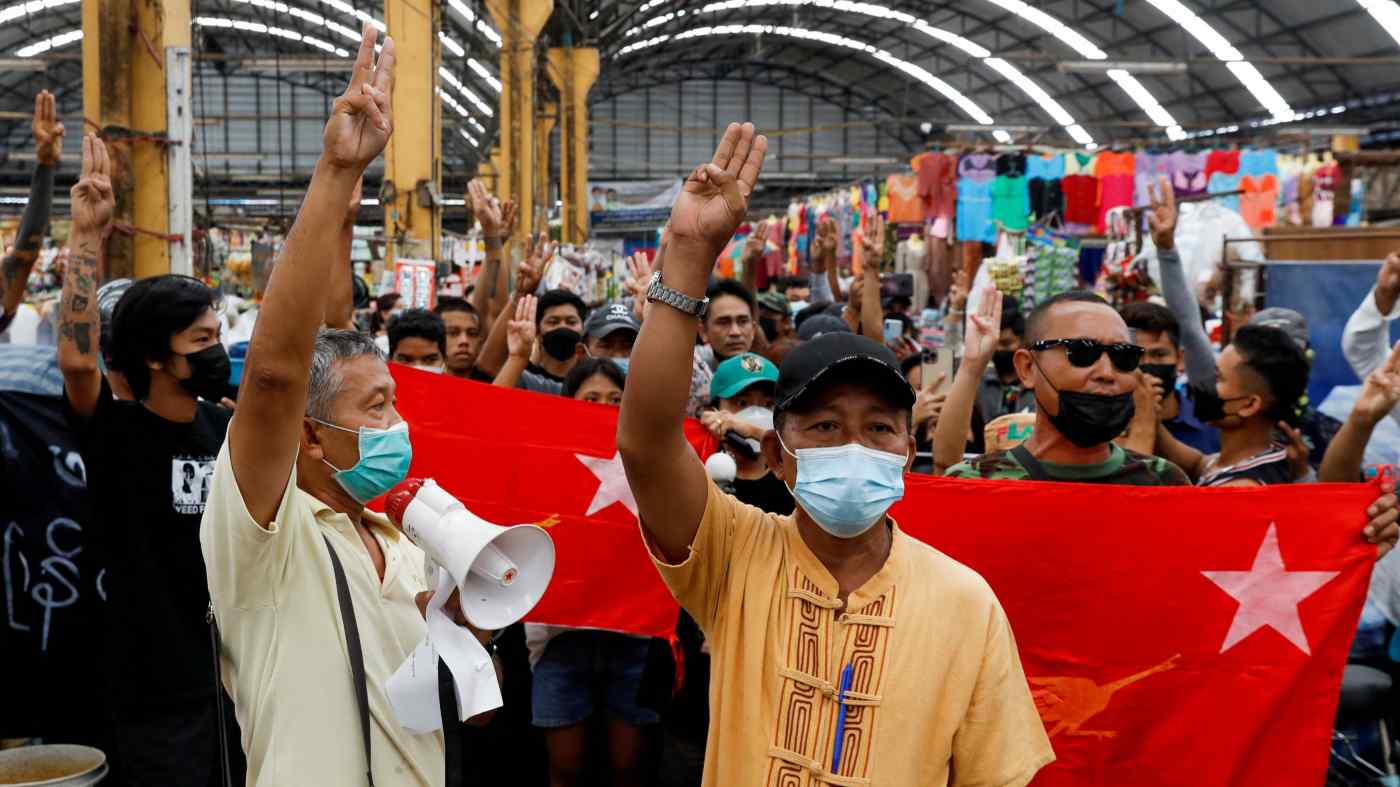 Myanmar citizens living in Thailand show the three-finger salute as they protest against the execution of pro-democracy activists in Mae Sot, Thailand on July 29.   © Reuters
August 3, 2022 13:48 JSTUpdated on August 3, 2022 18:05 JST | Myanmar
CopyCopied

The 10-nation bloc had been pushing for Myanmar to adhere to a five-point peace "consensus" agreed last year and has condemned the recent execution of four democracy activists by the junta.

"If more prisoners are executed, we will be forced to rethink...our role vis a vis ASEAN's five-point consensus," said Hun Sen, who is ASEAN's current chair and was speaking at the start of a meeting of the group's foreign ministers.

Hun Sen said ASEAN's unity had been challenged by the political and security implications of the situation in Myanmar, which has spiralled into an economic and humanitarian crisis.

The prime minister said that while the five-point consensus had "not advanced to everyone's wishes" there had been some progress including in providing humanitarian aid.

But he went on to say the current situation had "changed dramatically" and could be seen as even worse than before the peace agreement because of the junta's execution of the activists.

Cambodia along with other ASEAN member states "are deeply disappointed and disturbed by the execution of those opposition activists, despite the appeals from me and others for the death sentences to be reconsidered," said Hun Sen.

A senior U.S. State Department official said the United States is "looking what can be done to both sustain and increase the pressure on the regime to end the grip of violence".

Myanmar's military last week defended the execution of the activists as "justice for the people", brushing off a deluge of international condemnation including by its closest neighbors.

The military said it had executed the activists for aiding "terror acts" by a civilian resistance movement, Myanmar's first executions in decades.

Myanmar will not be represented at this week's meeting after its military rulers declined a proposal to send a non-junta representative instead.

ASEAN has since late last year barred the Myanmar junta from joining its meetings due to its lack of progress in implementing the peace plan.

Some other members of ASEAN, which has a tradition of non-interference in each other's internal affairs, have been increasingly strident in their criticism of the generals.

Malaysian Foreign Minister Saifuddin Abdullah has described the executions as a crime against humanity and appearing to make "a mockery" of the ASEAN peace plan.

"On Myanmar, they're all furious over last week's executions and will be looking to prove that ASEAN isn't completely neutered," said Greg Poling, director of Southeast Asia Studies at the Washington-based Center for Strategic and International Studies.

Still, an Asian diplomat who declined to be identified questioned what new measures ASEAN would be prepared to take.

"The five-point consensus was useful because Myanmar had agreed to it .... now, aside from making statements and carrying on humanitarian assistance, can you do anything without Myanmar there? Honestly, I don't know," said the diplomat.

Myanmar has been in chaos since last year's coup, with conflict spreading after the army crushed mostly peaceful protests in towns and cities.