Protesters outside foreign ministry in Tokyo call for suspension of financing 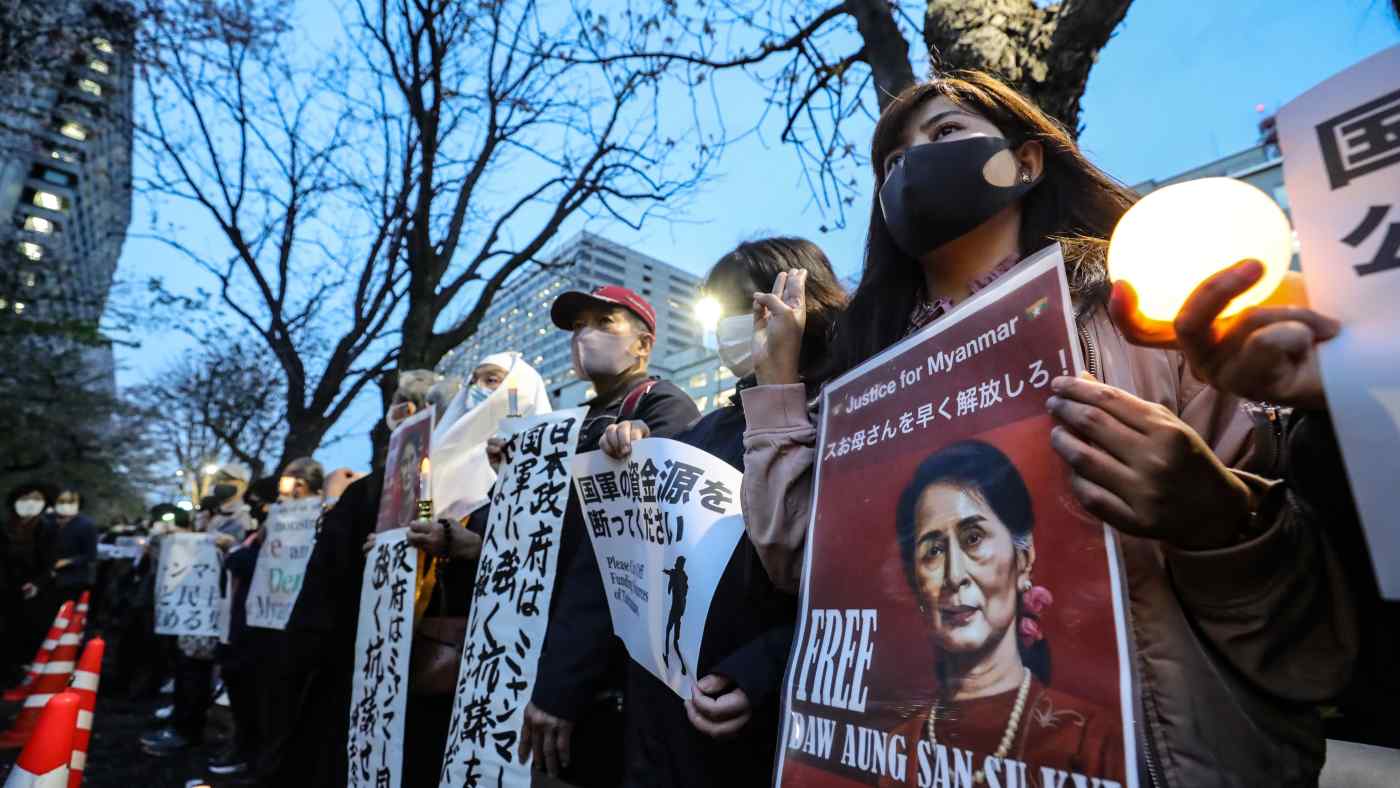 Protesters gather in front of the foreign ministry in Tokyo on Thursday to demand an investigation into whether public funds disbursed by the Japanese government to Myanmar as grants and loans are benefiting the Myanmar military. (Photo by Ken Kobayashi)
FRANCESCA REGALADO, Nikkei staff writerApril 1, 2021 20:38 JST | Japan
CopyCopied

TOKYO -- Members of Tokyo's growing Myanmar immigrant community gathered with civil society groups in the capital on Thursday to demand stronger action from the Japanese government on the military regime.

"She's like my mother. Every morning I pray for her when I wake up," said Pyae Pyae Win, 25, a refugee from near Yangon.

A petition drawn by Mekong Watch, a nonprofit organization, demanded an investigation into whether public funds disbursed by the Japanese government to Myanmar as grants and loans benefited the junta. Protesters petitioned Tokyo to suspend new and current financing during the investigation.

The protest comes two months after the Myanmar military, known as the tatmadaw, deposed the democratic government, preventing a newly elected parliament from sitting and arresting dozens of civil leaders, including Suu Kyi. Last weekend, a parade celebrating Armed Forces Day in the capital, Naypyidaw, turned into the deadliest day of anti-coup protests, with 107 dead across the country.

Eleven military leaders, including commander-in-chief General Min Aung Hlaing, were sanctioned last week by the U.S., European Union and Canada. The U.K. on Thursday sanctioned a conglomerate linked to the tatmadaw.

But as Myanmar's second largest source of development assistance, Japan has a large influence on the country's economic future.

Anxious not to be edged out by China, Japan sent 189.3 billion yen ($1.8 billion) in official development assistance to Myanmar in 2019, according to MOFA figures.

The Japanese government has declined to join allies in targeted sanctions, with officials including Foreign Minister Toshimitsu Motegi alluding to Japan's "unique role" in maintaining communication -- and influence -- with the tatmadaw.

"We are doing our best efforts to achieve goals such as stopping the violence and releasing detainees and swiftly restoring the democratic political system," a foreign ministry official told Nikkei Asia. Asked whether Japan lodged a complaint about last weekend's violence against protesters, the official said, "So far we have not received any sort of positive reaction from Tatmadaw."

Yuka Kiguchi, executive director of Mekong Watch, said in a statement that the group doesn't want Japan's 'unique role' to be one of supplying funds for projects that potentially finance the bullets that kill civilians in Myanmar."

"We want to show the concern of Japanese civil society to Myanmar people," Kiguchi told Nikkei Asia. "We feel our government is ignoring our demands. It looks very bad in this situation."

The Myanmar population in Japan has grown to over 20,000, according to the justice ministry.