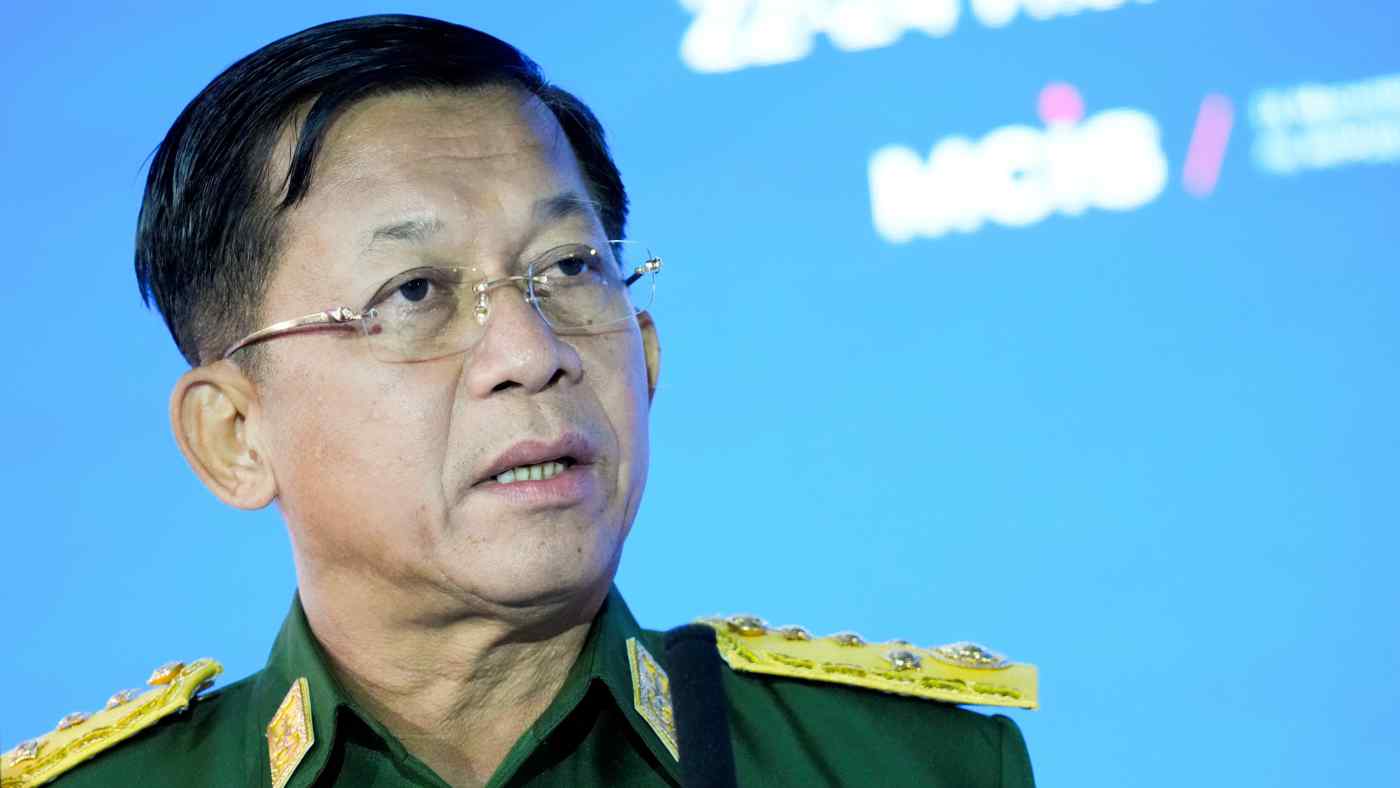 Myanmar's military ruler Min Aung Hlaing made speech on Aug. 1, repeated a pledge to hold elections by 2023 and said his administration was ready to work with a future regional envoy on Myanmar.   © Reuters
August 1, 2021 20:58 JST | Myanmar
CopyCopied

In a speech on Sunday, Min Aung Hlaing repeated a pledge to hold elections by 2023 and said his administration was ready to work with a future regional envoy on Myanmar.

The announcement and speech came exactly six months after the army seized power Feb. 1 from a civilian government following elections that were won by Aung San Suu Kyi's ruling party but that the military said had been fraudulent.

Min Aung Hlaing has chaired the State Administration Council (SAC) that was formed just after the coup and that has run Myanmar since then, and the caretaker government will replace it.

"In order to perform the country's duties fast, easily and effectively, the state administration council has been re-formed as caretaker government of Myanmar," a newsreader on state Myawaddy television said.

In his speech, Min Aung Hlaing repeated a pledge to restore democracy, saying, "We will accomplish the provisions of the state of emergency by August 2023."

He added: "I guarantee the establishment of a union based on democracy and federalism."

Shortly after the coup, junta leaders promised new elections within two years. The reference on Sunday to August 2023 was interpreted by some local media as extending that time frame by six months.

Min Aung Hlaing also said his administration would work with any special envoy named by the Association of Southeast Asian Nations (ASEAN).

ASEAN foreign ministers are to meet on Monday, when diplomats say they aim to finalize a special envoy tasked with ending violence and promoting dialogue between the junta and its opponents.

The army seized power after Suu Kyi's ruling party won elections that the military argues were tainted by fraud. It has said its takeover was in line with the constitution. The country's electoral commission has dismissed the fraud allegations.

After the coup, Suu Kyi, 75, was charged with several crimes. Her trial on charges of illegally possessing walkie-talkie radios and breaking coronavirus protocols is scheduled to resume on Monday.

The military authorities have faced months of protests, strikes that have paralyzed public and private sectors, and a resurgence of armed conflicts in the borderlands.

The authorities have branded their opponents as terrorists.

"At present, the whole country is stable except for some terrorist attacks," Min Aung Hlaing said in his speech.

The Assistance Association for Political Prisoners activist group has accused the armed forces of killing 939 people in suppressing dissent since the coup and said at least 6,990 military opponents have been arrested.

The military said the number of protesters killed is far lower and members of the armed forces have also died in violence. It said its response has met international norms in the face of threats to national security.