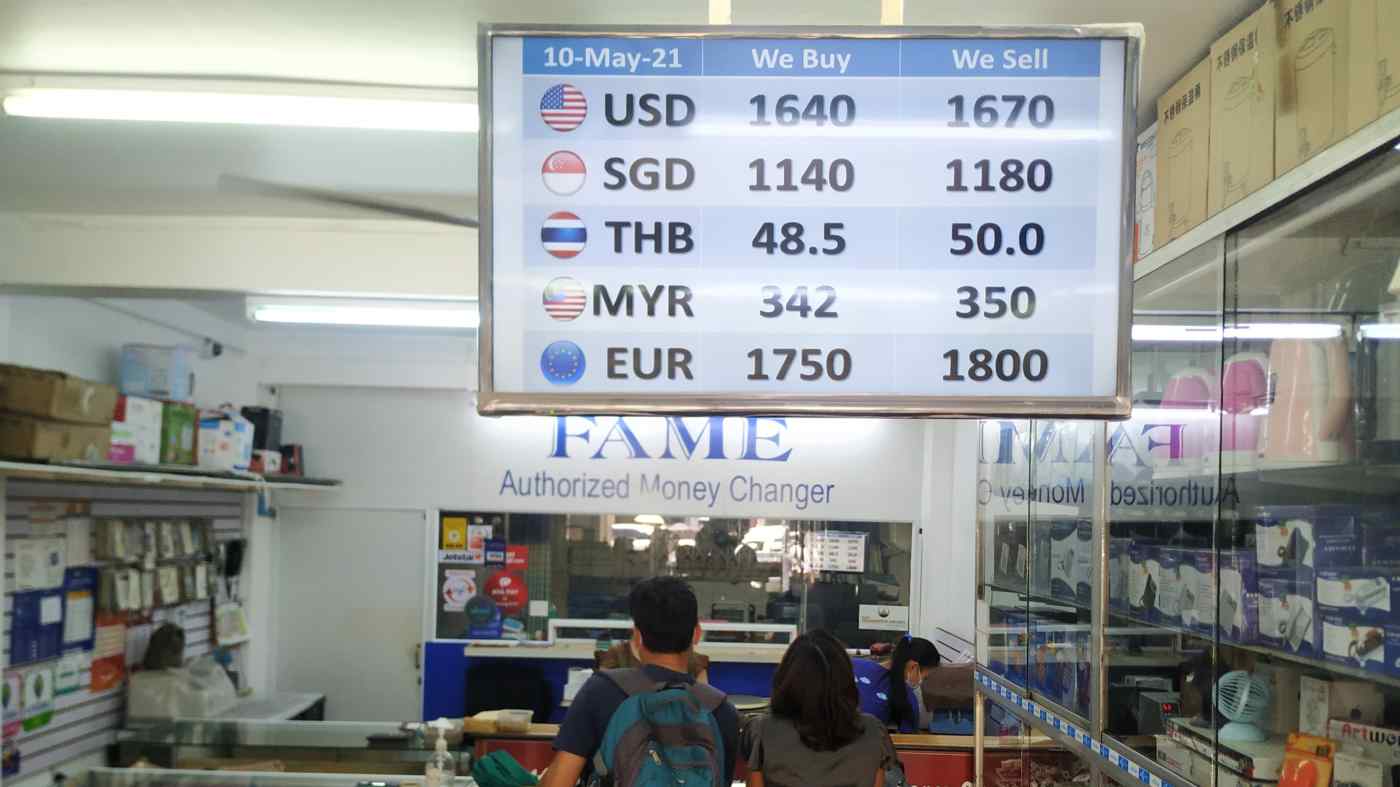 Money changers in Yangon are running out of hard currencies to trade as the kyat crashes to record lows.
Nikkei staff writersMay 10, 2021 21:04 JSTUpdated on May 10, 2021 22:58 JST | Myanmar
CopyCopied

BANGKOK -- Myanmar's foreign exchange hit a record low of 1,660 kyat on the dollar on Monday, according to a state media report citing the local exchange rate.

Despite continuous efforts by the junta, the currency has lost 20% of its value since a military coup on Feb. 1.

The previous record low was the market rate of 1,650 kyat to the dollar in September 2018 when the China-U.S. trade war led to a fall in the value of the yuan. That also brought down the kyat.

The drop results from growing distrust in the national currency that has prompted many to turn to money changers in search of hard currencies.

A money changer in Yangon told Nikkei Asia: "Demand for cash dollars is increasing day by day, and my dollar inventory is about to run out."

The exchange rate continued to spiral down on on Monday, going below 1,685 kyat in the open market -- lower than reported by state media. That led some money exchangers in Yangon to shut up business for the day earlier than usual.

"Today, the exchange rate is unstable, and the owner instructed us not to carry on operating," a staffer at a money exchange in downtown Yangon told Nikkei. Separately from the market exchange rate, the central bank also publishes a reference rate based on interbank exchange rates, which is used by corporates trading and investing overseas.

The reference rate held steady at 1,593.5 kyat on Monday, doing better than the lows recorded in September 2018. That suggests popular distrust on the streets is the main driver pushing down the currency value.

"People are taking out deposits and replacing them with dollars and gold in order to try and protect their assets," an employee of a foreign bank told Nikkei.

Commercial banks have been trying hard to prevent the outflow of deposits by tightening restrictions on ATM withdrawals. People have been waiting in long queues for hours every day to take out their money.

The Central Bank of Myanmar intervened twice in the forex market in late April by selling $12 million to support the kyat. The market price temporarily improved and then eroded on both occasions.

The central bank has been trying to help banks maintain deposit levels. Since May 3, people have been allowed to open new bank accounts from which they can apparently draw cash without difficulty.

The junta has been struggling to normalize the economy. It continues to block access to the internet at night, but has eased the curfew in Yangon.

"The money stored in bank accounts will never be lost for any reason," Win Thaw, the deputy governor of the central bank told reporters on Friday. "If people cooperate in trusting the state banking system, the difficulties they face will be solved in a short time."

The long lines at the ATMs betray no sign of such trust. "I can only expect to withdraw from my salary at around 3:00 p.m.," said a depositor lining up for an ATM in Yangon early on Monday morning. "I came yesterday around noon and waited until seven, but the ATM ran out of cash before I reached it."

Myanmar is reliant on imports for many processed foods and industrial products, and the weakening kyat is driving up prices. The cost of regular gasoline has risen over 30% in the past three months.

Many consider the collapsing kyat to be symptomatic of the military's failure to manage the economy. "The dollar-buying seems not to be limited to individuals but is spreading to corporates," a foreign banker told Nikkei.

"I think the situation is pretty bad for the junta -- it shows that people here no longer trust the currency," he said. "If everybody keeps buying dollars and gold, there is the risk that the kyat won't stop falling."