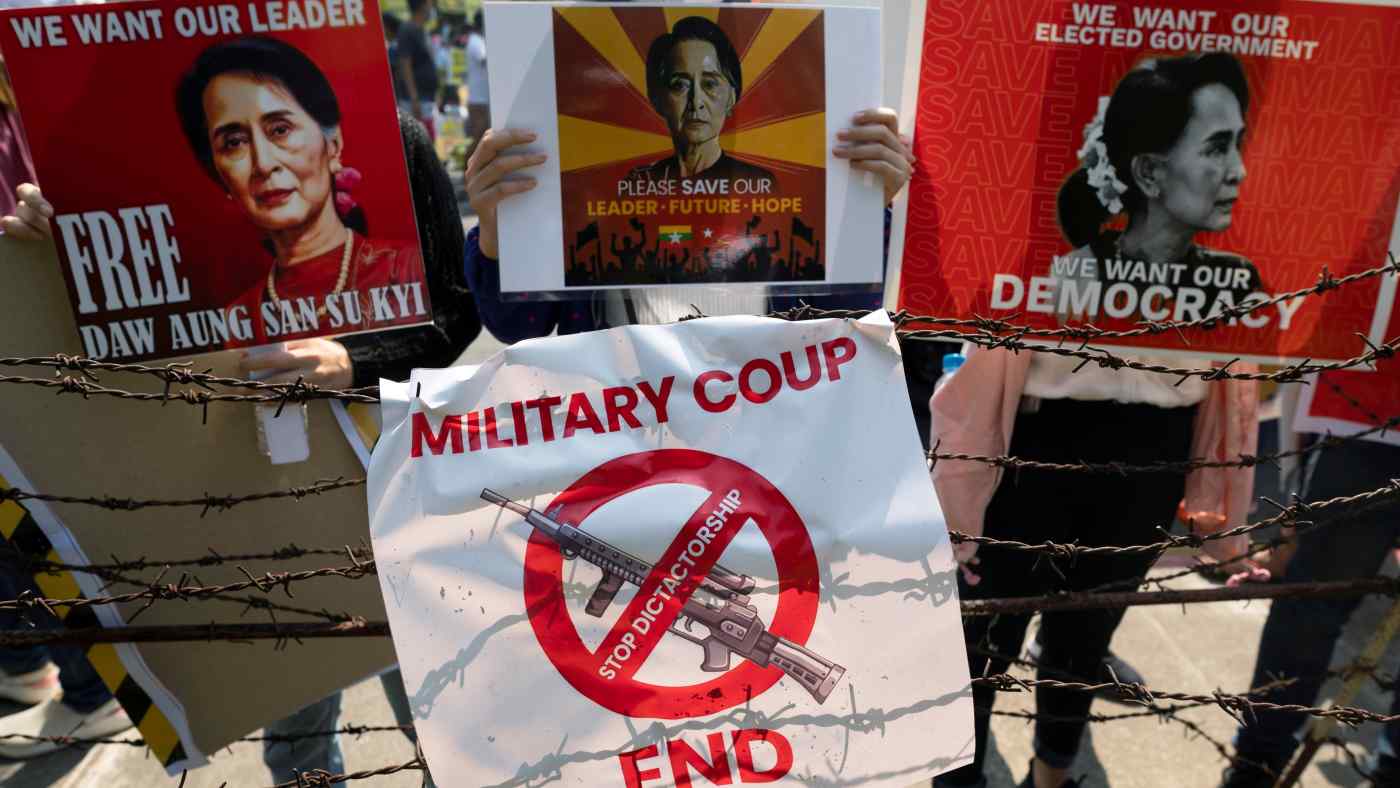 Suu Kyi's lawyer Khin Maung Zaw said the ousted leader is being charged with violating the country's Natural Disaster Law, without elaborating further. Suu Kyi was first charged with illegally importing walkie talkies and meant to be held under house arrest until Wednesday.

Meanwhile, in the first press conference held by the junta since it seized power on Feb. 1, Brigadier General Zaw Min Tun, spokesperson for the ruling State Administration Council, said, "The military will abide by the constitution," when he was asked about the detention of Suu Kyi and Win Myint. The two are in good health, said the brigadier general.

Over 400 politicians, activists, civil servants and students have been arrested since Feb. 1, including Sean Turnell, an Australian economic adviser to the state counselor. 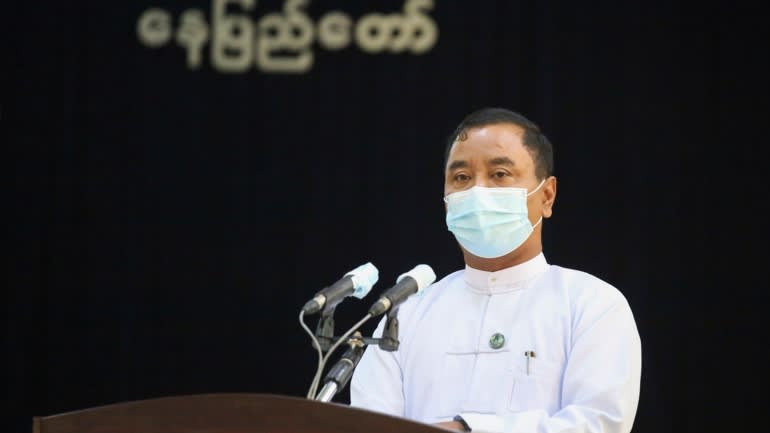 Brigadier General Zaw Min Tun on Tuesday held the junta's first press conference since it seized power in a coup on Feb. 1.   © Reuters

Myanmar authorities have been using firearms to disperse protesters. A woman was shot in her head, according to local reports. Multiple injuries from rubber bullets are being reported every day in different cities.

From Sunday, the military dispatched armored vehicles on the streets of Yangon and other major cities to prevent people from taking to the streets. Witnesses said on Tuesday that the demonstrating crowds, which had ballooned to tens of thousands last week, now only number in the hundreds in Hledan district, the commercial hub of Yangon.

However, Zaw Min Tun insisted that police are instead being attacked by demonstrators. A police officer had died after being wounded by "lawless actions," he claimed.

Zaw Min Tun continued to blame the turmoil on fraudulent general elections in November, and urged the media not to call the military seizure of power a coup. Poll watchdog Asian Network for Free Elections released an opposite assessment, lauding the Union Election Commission for successfully holding the November votes. "Polling and counting operations were conducted diligently and transparently," ANFREL said in its interim report.

The military on Tuesday pledged to return power to a civilian government. "Our objective is to hold an election and hand power to the winning party," said Zaw Min Tun.

The coup has been condemned by Western countries. U.S. President Joe Biden said on Feb. 10 that he had approved a new executive order allowing the U.S. to "immediately sanction the military leaders who directed the coup, their business interests as well as close family members."

The U.S. is planning to exert stringent export controls on Myanmar while continuing to support health care and other benefits for ordinary citizens. Zaw Min Tun described the sanctions as "already expected."

The United Nations Human Rights Council in Geneva adopted a resolution on Friday on the deteriorating human rights situation in Myanmar proposed by Britain and the European Union. Although the council avoided the use of the word "coup" to describe the military takeover, it expressed "deep concern at the declaration of the state of emergency imposed in Myanmar by the military" and called for "the restoration of the democratically elected government."

China dissociated itself from the resolution consensus along with other countries like Russia and the Philippines, saying the situation in Myanmar was an internal matter.

"We should not embark on widespread generalized indiscriminate sanctions because the people who will suffer most will be the ordinary people in Myanmar," he said. Singapore is a major investor in the country.

Myanmar's ties with foreign countries will not be severed, the junta spokesperson said.

Lines of communication have been repeatedly disrupted since the coup. Most recently, the military suspended access to the internet from 1 a.m. to 9 a.m. over the last two days. Zaw Min Tun denied a widespread rumor that China has been assisting with the internet blackout.