Myanmar junta crushes journalists, but news still gets out 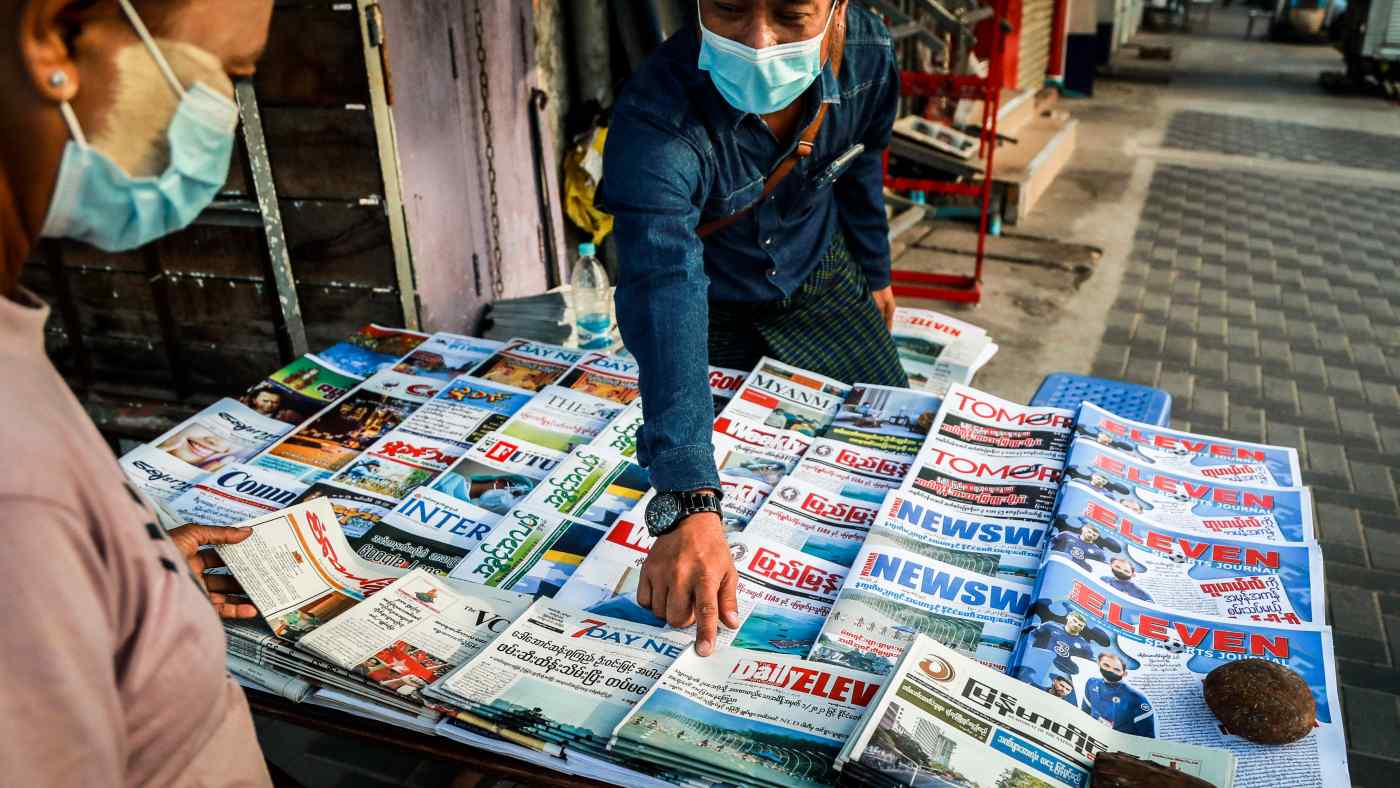 YANGON/BANGKOK -- As Myanmar's military junta seeks to crush the country's media -- through crackdowns on independent publications, arrests and restrictions on reporting -- concerns are rising about the long-term future of press freedom and safety of journalists in the country.

Since its Feb. 1 coup, the military regime led by Gen. Min Aung Hlaing has arrested at least 46 journalists, according to the Assistance Association for Political Prisoners (AAPP), which monitors arrests. At least 23 remain in jail on charges related to sedition or violating public order.

Security forces have raided several newsrooms and revoked the licenses of Myanmar Now, Mizzima, DVB, Khit Thit Media and 7Day News. Even so, four of the five are still publishing articles through social media as journalists risk harsh penalties to cover the news.

"What's scary is that journalists can be arrested or detained not just because of their field reporting on the streets and protests, but also for what they say online and who they speak to," said John Aung (not his real name), an editor at one of the media companies whose license has been revoked.

"Although many Myanmar journalists are still doing their job via social media and other means, despite internet restrictions and fears of phone taps, the regime has a lot of ways to assault the media," he added.

On Wednesday, Associated Press reporter Thein Zaw was released from detention three weeks after being arrested while covering a protest, after a court dropped charges of violating the public order law. He was among 628 people released on the same day from Yangon's Insein Prison, in an apparent move by the military to placate protesters ahead of the annual Armed Forces Day ceremony on March 27. But Thursday saw more shootings, beatings and detentions of protesters by security forces in towns around Myanmar, which dampened the general cheer over the prisoner release.

In mid-February, 15 members of the Myanmar Press Council, an independent media adjudication body, resigned, saying they were unable to protect press freedom, uphold media ethics or protect the safety of fellow journalists.

Daily internet blackouts and the suspension of mobile phone data services and public Wi-Fi have fueled alarm over disruptions of news and information flows from Myanmar. "The independent media plays a vital role in bringing full information about what is happening in Myanmar to the world's attention," the Foreign Correspondents' Club of Thailand said in a March 3 statement, calling on the junta to free detained journalists and drop charges against them.

"The media landscape [has been] dragged back to the time before political reform started in 2011," said John Aung, who is in hiding with his family.

From 2011, Myanmar saw a surge of free expression under the quasi-civilian administration of President Thein Sein, a former general who initiated political and economic reforms. However, the collapse or voluntary closures of local publications such as The Myanmar Times, The Voice, and Eleven Media Group since Feb. 1 marks a sharp reversal from the preceding boom in independent daily national newspapers. State-run media outlets, seen as propaganda channels for the regime's State Administration Council, include the military-run MRTV and Burmese-language newspaper Myawady Daily, and the English-language newspaper Global New Light of Myanmar.

"The generals are attempting to rule over the entire media industry," John Aung said. "Look at how they are making threats to both individual journalists and news outlets," he added. "Even a phone call to your source could be a risk to yourself and your source, to everyone." 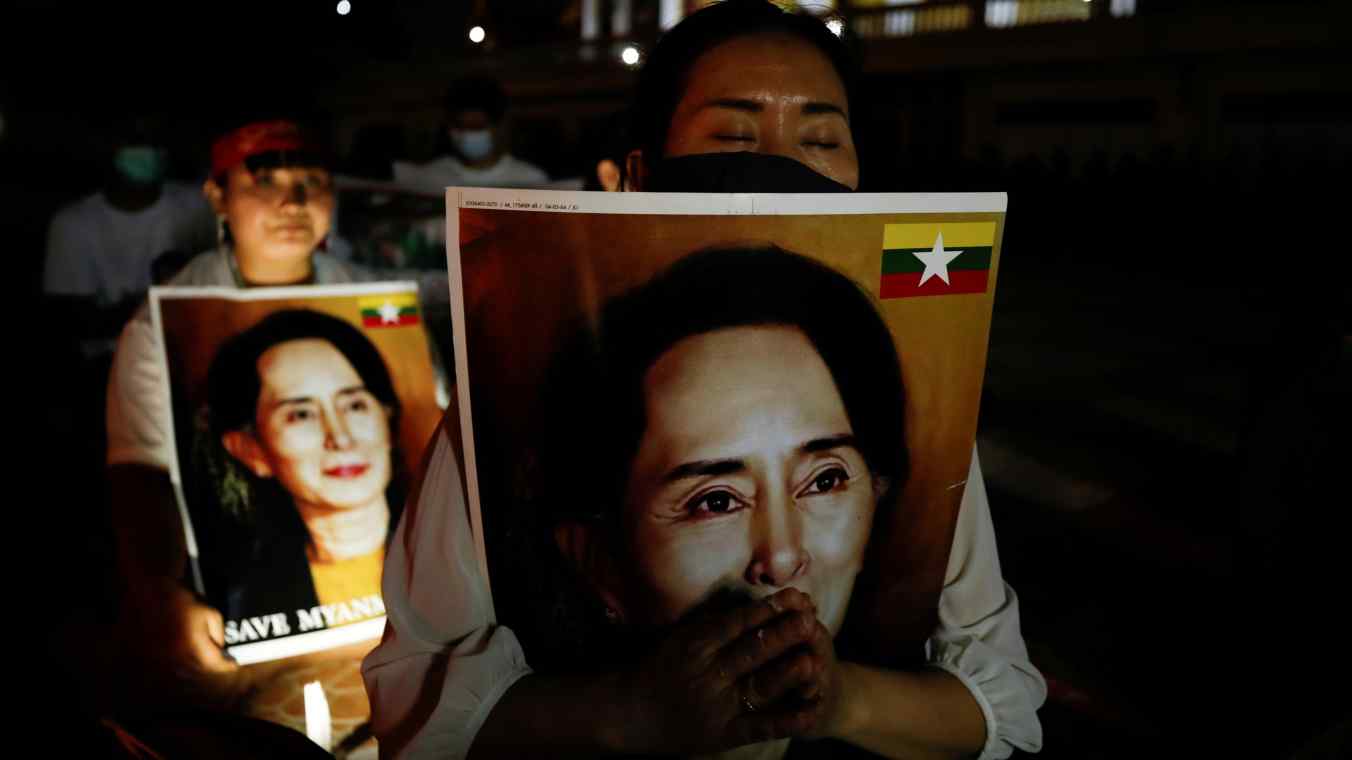 Many media representatives note that the elected government ousted by the coup, led by Aung San Suu Kyi's National League for Democracy, was sometimes considered hostile toward independent reporting. Suu Kyi, now under arrest, publicly defended the jailing of two Reuters journalists who exposed a massacre of Rohingya Muslims by the military in a 2017 crackdown.

Officials in the NLD administration also sued journalists for reporting Rohingya atrocities and other conflicts, pressing criminal charges, and the government cut off internet access in conflict-torn Rakhine and Chin states last year, at the request of the military.

But the junta's actions have taken media repression to a new level, say critics. "It is only the beginning of the crackdown," said John Aung. "The Tatmadaw [military] will ramp up more and more pressure. It's too early to judge whether some elements of the free press will survive this regime."

The junta has also moved to criminalize online criticism. After blocking social media platforms in February, the government cut off access to mobile internet data indefinitely in early March. The shutdown stops journalists from live-streaming protests and atrocities committed by the security forces.

Army spokesperson Zaw Min Tun said on Tuesday that there were no plans to lift internet restrictions, claiming that violence was being provoked online. The rule of law and stability were "most important" for Myanmar, he said.

The junta has also introduced punitive changes to internet regulations to allow mass surveillance, and criminalized online criticism of the authorities, virtual private networks and encryption technology. However, the regime quietly shelved a more draconian cybersecurity bill following a backlash from business and civil society groups.

"The amended electronic transactions law [now in force] combines broad powers of interception with vaguely-defined digital crimes, allowing mass surveillance and locking up journalists and others who are involved in data and communications," said Oliver Spencer, a legal expert with Free Expression Myanmar, a local rights group.

Martial law, imposed in parts of Yangon and elsewhere from March 14, has removed remaining legal safeguards and increased the severity of possible punishments, Spencer added. The junta has also suspended provisions of privacy laws and altered the penal code and the code of criminal procedure, primarily to enable security forces to search homes and offices without reason, and to criminalize criticism of the defense services.

Another Myanmar journalist, who formerly wrote for a now-suspended newspaper and spoke on condition of anonymity, echoed John Aung's concerns. "I fear the junta will resort to harming my family as a way to get back to me," the journalist said. "What's scarier is that we're not even safe in our own homes anymore."

More than 2,900 people remain in custody or face outstanding charges, according to the AAPP, which has also confirmed at least 320 protest-related killings.

The crackdown on mainstream press has inadvertently boosted social media platforms, particularly Facebook and Twitter, which are now key avenues for disseminating information both domestically and internationally, the journalist added.

Media companies, many of which were already struggling with hits to revenue caused by COVID-19 lockdowns and distancing restrictions, are now facing a coup-induced financial crisis. Prominent titles such as Myanmar Now and The Irrawaddy are seeking donations to stay afloat.

"[A big] problem we are facing after the coup is cash flow. The banks are not working," said one of several senior Myanmar editors who joined an online discussion on Myanmar press freedom held by the FCCT in mid-March. With the banking system semi-paralyzed and independent media operating below the official radar, media companies are struggling to keep their reporters on payroll, he added.

The crackdown on the free press and frequent internet blackouts have clearly unnerved the wider business community. Myanmar investment advisory firm Thura Swiss decided to suspend its weekly newsletter for executives and investors in late February, saying that "restrictions and new laws with severe penalties make it too risky and burdensome to put together a weekly newsletter."

The worsening human rights situation and increased reputational risks mean that investors doing business in Myanmar need to undertake closer due diligence on local partners, said one prominent business analyst, noting that "when press freedom is undermined, it makes it more difficult for businesses to get the information they need."

Prominent foreign business groups in Myanmar have spoken out against the coup and the media crackdown. "We reiterate our previous calls for unrestricted access to information across all telecommunications systems available in Myanmar to support the free flow of information," said a March 19 joint statement issued by most Western chambers of commerce in Yangon.

Business ties also came to the fore as the U.S. and U.K. on Thursday took the strongest moves yet by Western governments to pressure Myanmar's military, announcing coordinated sanctions against two military-controlled holding companies. Both governments cited the "overthrow of the democratically elected government and the ongoing repression of the Burmese people" for their decision to blacklist the companies.