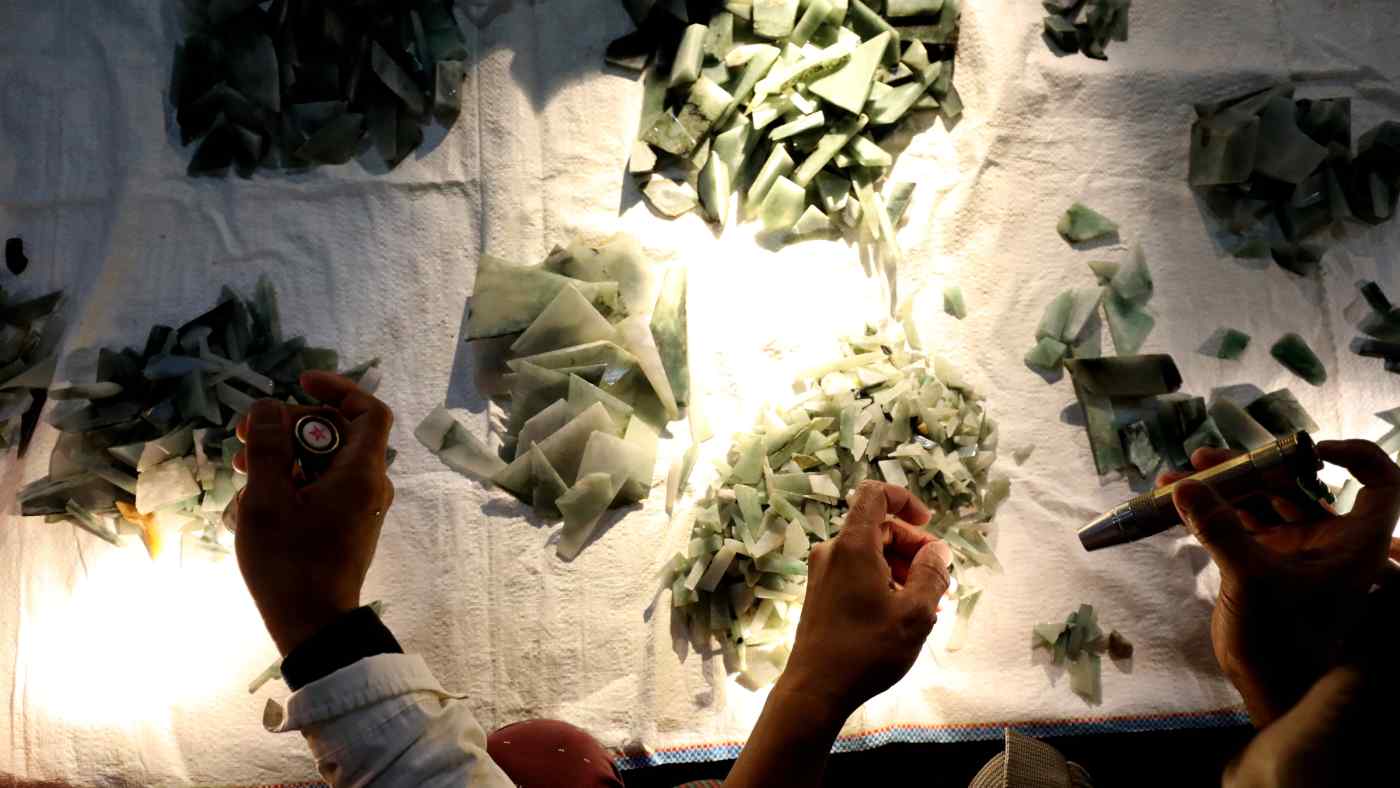 At the same time, recent days have seen a remarkable display of the military's grasp on Myanmar's natural resources, with a multi-million dollar, 10-day auction of gems, jade and pearls in the capital, Naypyitaw.

In daily reports, state-run media said revenue from sales of gems, pearls and jade in the current auction, which ends Saturday, had amounted to between $1 million to $6.4 million per day. On Thursday, for example, takings of jade sales alone reportedly amounted to 9.2 billion kyat ($6.4 million).

Highlighting the military's hold on extractive industries, the U.S. Treasury Department on Wednesday added a Myanmar state-run supplier of jade, a key money-maker, to its financial blacklist. The action, the latest by the Biden administration to restrict the junta's funding sources, targets Myanma Gems Enterprise, also known as Myanmar Gems Corp. Earlier, the administration sanctioned Myanmar Ruby Enterprise, Myanmar Imperial Jade Co., and Cancri (Gems and Jewellery) Co. -- all military-controlled traders of gems and precious stones, and the two conglomerates MEHL and MEC.

Since the coup, a combination of escalating violence by the junta's security forces against unarmed civilians, with more than 600 killed and thousands detained, and nationwide resistance to the regime have hit an economy already weakened by last year's pandemic-related lockdowns.

Fitch Solutions, an affiliate of global rating agency Fitch Ratings, in a note on April 5 revised its forecast for the financial year through September to a 20% contraction, from an earlier forecast of 2% growth. It predicted drastic declines in almost every key measure, from exports and investment to general consumption, tax revenues and government spending on COVID-19 relief.

Even then, it said, amid the crackdown by security forces against civilians and fighting with ethnic armed groups, risks to the revised forecast of a 20% contraction are "still heavily weighted to the downside."

"To be sure, economic collapse is a key strategy adopted by the anti-coup protests," the report noted, citing a civil disobedience movement which has urged civil servants and private sector employees not to turn up for work, and the resulting intensification of military force against protesters and civilians.

"We believe that the elevated social instability in the country will cripple all aspects of gross domestic product by expenditure," Fitch said. "There is no worst-case scenario on the economy which we can rule out."

The Fitch forecast significantly exceeded the World Bank's recent projection of a 10% contraction in economic growth this year, and reflects similarly grim forecasts by private economists who in recent days have warned that the economy is in "free fall."

In an accompanying Macro Poverty Outlook note, the World Bank said the turmoil would compound existing welfare challenges faced by the poorest and most vulnerable in Myanmar, and would "likely result in a sharp increase in poverty, heightened food security risks, and deeper destitution for those already poor."

While economic collapse would deny the junta some critical revenues, it can still draw on the country's natural resources. Mineral-rich Myanmar holds deposits of jade and rubies, as well as gold, copper, tin, marble and rare earth metals, in addition to offshore gas fields. An investigation by corruption watchdog Global Witness estimated the value of sales by Myanmar's jade industry at up to $31 billion in 2014, or nearly half the country's GDP, with most of the money going to the military and other elites that control the trade.

In a more conservative estimate, the Extractive Industries Transparency Initiative, the global standard for transparency in the oil, gas and mining industries, estimated that more than 820 million euros ($975 million) of gems were sold at the country's emporiums in the 2017-18 financial year. Another EITI report in 2016 estimated that 60-80% of Myanmar's gems are not declared and avoid taxation.

In 2016, major export markets for Myanmar's minerals were China, Indonesia, Thailand and India.

Under the ousted National League for Democracy government, and the previous government of President Thein Sein, laws were passed to try to regulate Myanmar's precious stones, jade and logging industries. But military companies have maintained strong business interests in these fields and are likely to revive and expand much of this trade.

Another vital source of revenue for the junta, or State Administration Council, are exports of natural gas, which amounted to $3.3 billion last year, according to U.N. trade statistics.

Gas, alongside garment exports, were strong drivers of Myanmar's economic growth in 2018-19, before COVID-19, according to the International Monetary Fund.

"Oil and gas operators provide a key source of revenue for Myanmar," he said in a March 5 letter sent to the oil and gas companies. "The CRPH and I hold grave fears that revenues collected from oil and gas operators are highly likely to be used to sustain the current military junta's violent rule and enrich its leaders."

Total, lead operator of the Yadana offshore gas field, confirmed it will continue paying taxes and other fees to the state to protect staff from forced labor and maintain electricity supplies. But reflecting public pressure, the French company said it would contribute the equivalent of $4 million monthly tax to human rights groups.

However, in what could be an emerging two-track economy, some economists predict that funds will continue to flow to a military-linked elite and also into new defense spending to resupply the military as the crisis deepens.

A recent report by economists affiliated with Myanmar financial institutions warned that the economy will become even more dependent on sectors where the military and its affiliates have a dominant position in the market, particularly in oil and gas, mining, transport and timber.

"While the military's interests diversified over the last decade, and while they will also be vulnerable to the economic shock, the military and cronies are in a better position than the broader public to withstand further economic downturn -- unless their interests are targeted in a deliberate and comprehensive fashion," said the report, which is not public but seen by Nikkei Asia. "They have controlling interests in key sectors and some likely possess extensive foreign assets."

"The government is no longer collecting basic economic data, so the real situation is unclear," one of the co-authors said. "I don't think anyone would have predicted the severity of the economic contraction when the coup happened in February."

In other indicators, Fitch Solutions said private consumption, which accounts for 55% of GDP, is set to weaken further. It cited "on-the-ground" sources saying that many nonessential shops in the country have shut down as a result of the spiraling violence.

Meanwhile, gross fixed capital formation, or direct investment, accounting for 31% of GDP, will likely register a major collapse, it warned. "The situation in Myanmar has now exceeded the point of uncertainty and we expect that businesses with the ability to halt further investments are likely to do so, if not liquidate their assets and withdraw their funds altogether."

Government consumption, accounting for 18% of GDP, will also fall, Fitch Solutions warned. "With tax collections likely to be almost nonexistent during the crisis, we believe the military government is facing a cash crunch. In terms of expenditure trends, spending on COVID-19 relief is likely to drop amid the crisis."

The report also flags the risk of soaring inflation over coming quarters, "even if this may not yet happen in the year to Sept. 30." Faced with dwindling tax collections and pressure on other revenue sources, there is a danger that the junta-controlled central bank will print more money to aid government finances, thereby fueling inflation, it warned.

"With a quarter of the population in poverty in Myanmar, and the share likely to rise amid this crisis, runaway inflation will weigh heavily on private consumption. Excessive inflation will also rapidly erode investment returns and accordingly deter investment," Fitch Solutions noted.

Formal trade too, is likely to collapse, with exports expected to be reduced to mainstay mineral ore and fuel, which account for 30% of Myanmar's total goods exports. Fitch warned of a 60%-plus annual fall in exports of general goods in the fiscal year to Sept. 30, warning that even if global demand recovers, Myanmar will probably see exports in manufactured goods fall heavily this fiscal year. "Meanwhile, we believe that domestic food producers are likely to hoard agriculture produce rather than export amid the current crisis," it said.