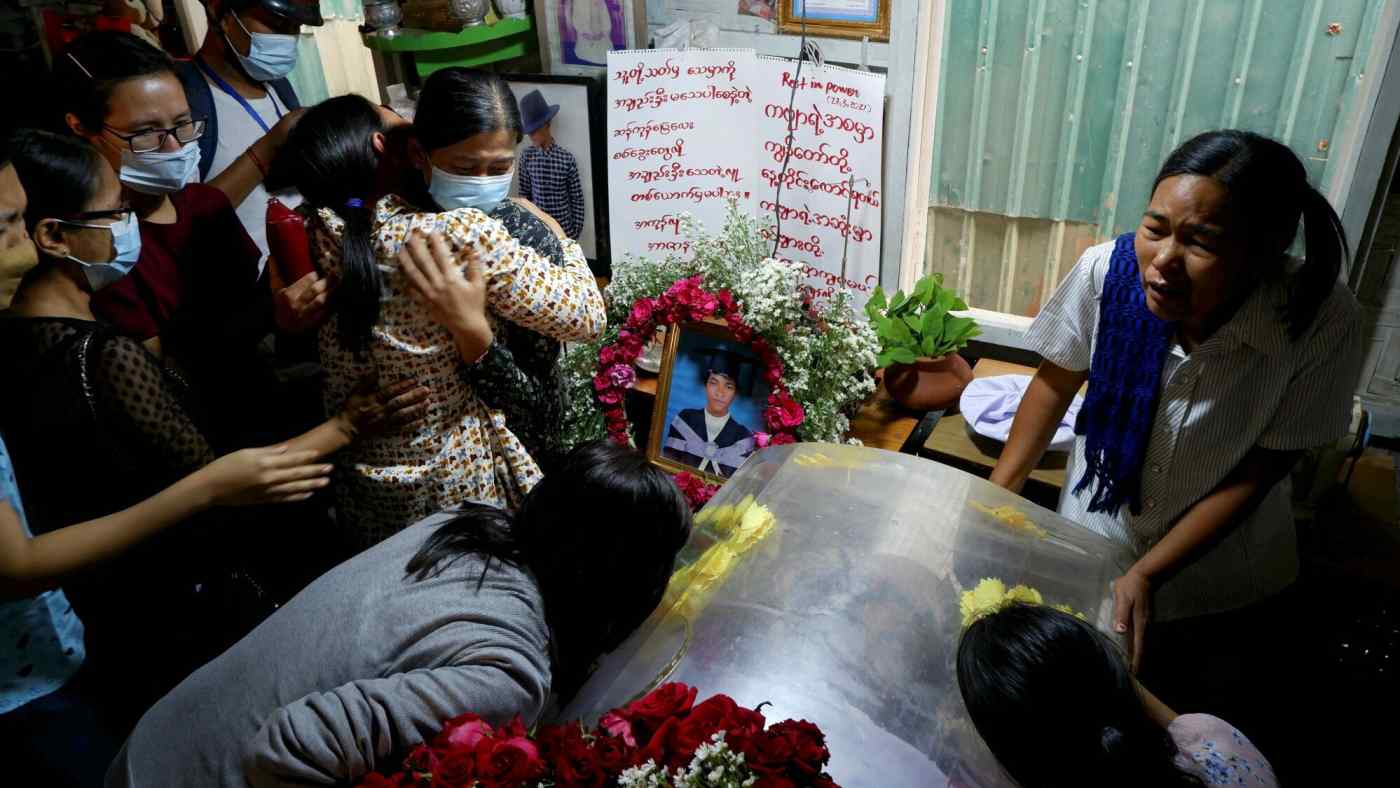 Mourners attend the funeral of Kyaw Win Maung, who was shot and killed during a protest against the military coup, in Mandalay on March 28.   © Reuters
GWEN ROBINSON, Nikkei Asia editor-at-large, and RORY WALLACE, Contributing writerMarch 29, 2021 06:01 JST | Myanmar
CopyCopied

BANGKOK/YANGON -- Among all the international condemnations of the Myanmar military and its actions since the Feb. 1 coup, a statement by the defense chiefs of Japan, South Korea and 10 other countries was one of the shortest but may have hurt junta chief Senior Gen. Min Aung Hlaing the most.

The statement, drafted via an exhaustive consultation process led by the U.S. Department of Defense and its Hawaii-based Indo-Pacific Command, aimed to "speak to the military in their own language," said a Yangon-based diplomat with knowledge of the talks. The move by such a large group of defense chiefs was unprecedented, he said, and came in response to growing alarm among Western-allied military organizations at the brazen targeting of unarmed civilian protesters and blatant human rights violations.

In the three-sentence statement, the defense chiefs of Australia, Canada, Denmark, Germany, Greece, Italy, Japan, the Netherlands, New Zealand, South Korea, the U.K. and the U.S. said they "condemn the use of lethal force against unarmed people by the Myanmar Armed Forces and associated security services."

"A professional military follows international standards for conduct and is responsible for protecting -- not harming -- the people it serves," the statement said. "We urge the Myanmar Armed Forces to cease violence and work to restore respect and credibility with the people of Myanmar that it has lost through its actions."

The statement was remarkable for several reasons, not least because military organizations usually leave such pronouncements on human rights issues to their civilian overseers. It is extremely rare for one set of generals to criticize foreign peers. In earlier negotiations between potential signatories, some Western military leaders expressed unease at the statement's "political" nature, and at least two Western defense chiefs declined to sign, according to another diplomatic source with knowledge of the talks.

Most significant, and possibly the most irksome for Myanmar's generals, was the inclusion of Japan and South Korea as signatories -- the only Asian countries to join the group. Both had enjoyed good ties with the Myanmar military and had hosted Min Aung Hlaing as commander in chief of its armed forces and other key generals, now members of the junta, which calls itself the State Administration Council. Many signatories had begun modest defense cooperation programs or exchanges with the Tatmadaw, as the military is known, although some had suspended or cut back contact after its brutal 2017 campaign drove hundreds of thousands of Rohingya Muslims from the state of Rakhine to Bangladesh. For Japan and South Korea, this statement marked the first time that their defense chiefs had publicly criticized another Asian military command on human rights.

The statement -- released Sunday morning local time, the day after the annual Armed Forces Day parade in the capital of Naypyitaw -- only added to the Myanmar's growing international isolation.

But it will "almost certainly have the effect of pushing the junta closer toward its remaining allies and supporters," the Yangon-based diplomat said. Even as the military stepped up its brutal crackdown on protests with attacks on unarmed civilians in more than 40 towns and cities across Myanmar, eight countries sent military representatives to the parade: Bangladesh, China, India, Laos, Pakistan, Russia, Thailand and Vietnam. One Western defense analyst called it "an obscene, military hardware display with a North Korean overtone."

"In contrast, India's reluctance to take a stand is driven by its fear of pushing the Tatmadaw into Beijing's embrace," he told Nikkei Asia.

Moscow underscored its friendly relations with Myanmar's military by sending Deputy Defense Minister Alexander Fomin, who was given a front-row seat at the parade. Fomin had told Min Aung Hlaing at an earlier meeting that Russia would like to further strengthen military ties with Myanmar, which he called a reliable ally and strategic partner in Asia, according to the Interfax news agency. In his parade-day speech, the junta chief returned the praise by calling Russia a "true friend."

The scene coincided with the bloodiest day of violence against civilians since the Feb. 1 coup, and also saw the military launch an air attack on a village in eastern Myanmar, in territory controlled by an armed group from the Karen ethnic minority, killing three civilians. The attack was seen partly as retribution for the Karen National Union's earlier attack on a Myanmar army post near the Thai border, which the KNU said killed 10 -- including a lieutenant colonel -- as tensions with the military surged after years of relative calm.

Indications that other armed ethnic groups were preparing or had already launched attacks on the military, particularly in Shan and Kachin states, prompted analysts to draw comparisons with the civil war in Syria, where what began as a peaceful uprising a decade ago turned into a full-scale civil war.

In a tit-for-tat escalation, the military on Sunday carried out air raids on five areas in the Mutraw district near the border, according to an independent group, the Karen Women's Organization.

The KNU was among the ethnic armed organizations to snub Armed Forces Day. The group would "only attend ceremonies that reflect dignity, humanity, justice and freedom for all," it tweeted.

At least 114 civilians, some of them children, were killed Saturday across Myanmar, independent news portal Myanmar Now reported. The confirmed death toll since Feb. 1 has reached 459, according to the Assistance Association for Political Prisoners. Arrests continue, despite the release of hundreds of detainees last week. There were 2,559 people known to be in detention as of Sunday, the AAPP said.

Coming the day after the Armed Forces Day ceremony, the joint defense chiefs' statement was widely seen as a humiliation for Min Aung Hlaing.

In the parade-day speech bearing no trace of irony, the junta portrayed Myanmar's military as seeking to "safeguard democracy." He pledged to "protect the people" and promised elections at an unspecified time. Making demands via violence is "inappropriate," he said, possibly implying that the protesters deserved their fate.

The U.S., the European Union and Britain were among those denouncing the brutality in recent days by issuing statements through their Yangon embassies. The U.K.'s ambassador to Myanmar, Dan Chugg, wrote that the security forces "disgraced themselves by shooting unarmed civilians." American counterpart Thomas Vajda called the bloodshed "horrifying," writing that "Myanmar's people have spoken clearly: they do not want to live under military rule."

In a fresh sign of collapsing confidence in the Southeast Asian country, the British Embassy updated its advice to expatriates Sunday night to urge them to leave Myanmar "as soon as possible" by commercial means, citing "the recent increase in violence."

"Shooting against civilians, the inhumane treatment of detainees, and strict crackdown on media activities by the Myanmar military and police are actions that contradict what the Myanmar military officially announced about the importance of democracy," Motegi said in a statement on Sunday. "The Myanmar military leadership should recall that the military is an organization for protecting the lives of its people from foreign threats."

Saying the use of live ammunition against peaceful protesters "can never be tolerated," Motegi strongly urged the military to "immediately stop resorting to violence," release detainees and swiftly restore democracy.