Speech at the General Assembly gives global platform to opposition Myanmar's ambassador to the United Nations Kyaw Moe Tun gives the three-finger salute at the end of his speech to the General Assembly where he pleaded for International action in overturning the military coup in his country.   © Reuters
GWEN ROBINSON, Nikkei Asia editor-at-largeFebruary 27, 2021 10:19 JST | Myanmar
CopyCopied

BANGKOK -- Myanmar's ambassador to the United Nations gave a sweeping denunciation of the coup in his country on Friday, giving a boost to the anti-military protests at home and raised the stakes for U.N. member countries in their responses to the coup that has killed at least four civilians.

In an extraordinary speech to the General Assembly's informal plenary on Myanmar, Ambassador Kyaw Moe Tun called on the international community to reject the coup and "use any means necessary" to act against the military regime and protect the country's people, stating that "the coup must fail."

His speech overshadowed, but did not outweigh, the strength of preceding remarks by Christine Schraner Burgener, the U.N. special envoy on Myanmar. For the first time since Feb. 1 coup, Burgener urged countries not to "lend legitimacy or recognition" to the military regime, saying the coup was a clear violation of Myanmar's constitution "regardless of what they claim."

She called for the restoration of democracy and gave the first high-level endorsement to a small group of National League for Democracy members of parliament, who were elected in the Nov. 8 poll but were unable to take their seats due to the putsch. The NLD is the party of Myanmar's democracy icon Aung San Suu Kyi, who was deposed as de facto leader after being arrested during the coup.

The group, called the Committee to Represent the Pyidaungsu Hluttaw (CRPH), is a fledgling movement that began with barely 15 MPs who held a virtual swearing-in ceremony on Feb. 4. The CRPH has since struggled for international acknowledgment. But Burgener's endorsement, which is seen as having the backing of the U.N. Secretary-General Antonio Guterres, could give the body legitimacy as a form of "parliament in exile," according to several diplomats at the U.N.

The CRPH on Wednesday announced it had appointed a representative to the U.N. and to handle international relations. The question now is whether the U.N. can or would accept a CRPH representative, even as an informal envoy, and whether it would stand by Myanmar's incumbent U.N. ambassador -- who may be forced to seek asylum in the U.S. or elsewhere.

"If the junta tries to revoke the appointment of the ambassador and to appoint a new one, U.N. members may be forced to make a choice," she said.

Burgener's remarks, she noted, indicated a "game changer" for the U.N.

"She clearly stated the junta is illegitimate, while lending credibility to the CRPH. So, it is not the Tatmadaw vs. the NLD. It is the Tatmadawa vs the people of Myanmar," van den Assum added, using the name of Myanmar's military.

Junta leaders have yet to comment on Kyaw Moe Tun's status. In his address to the General Assembly, he spoke in a measured tone that occasionally faltered with emotion, and called for "further strongest possible action from the international community to immediately end the military coup, stop oppressing the innocent people... and to restore democracy."

He appealed to his country men and women to continue supporting the protests.

"This uprising must succeed, the public is key," he said, before raising his hand in a three-fingered salute. The gesture, used in protest movements in Thailand and Hong Kong, has become a symbol for hundreds of thousands of protesters throughout Myanmar.

The speech quickly went viral, particularly on Twitter, which has become the leading social media platform in Myanmar after the junta blocked Facebook access. "We finally have a voice in UN! U Kyaw Moe Tun, through trembling voice, courageously made a stand with the people and CRPH ... My respect to his bravery," wrote Helen Yati.

The majority of Western representatives in the U.N. session criticized the coup, including Linda Thomas-Greenfield, newly appointed U.S. ambassador to the U.N., who addressed the General Assembly for the first time since her appointment. She commended the "courageous and brave statement" by her Myanmar counterpart, and said the U.S. would continue to take actions in close coordination with allies and partners.

"We will show the military that their actions have consequences. Violence against those exercising their human rights and fundamental freedoms is unacceptable," she said. 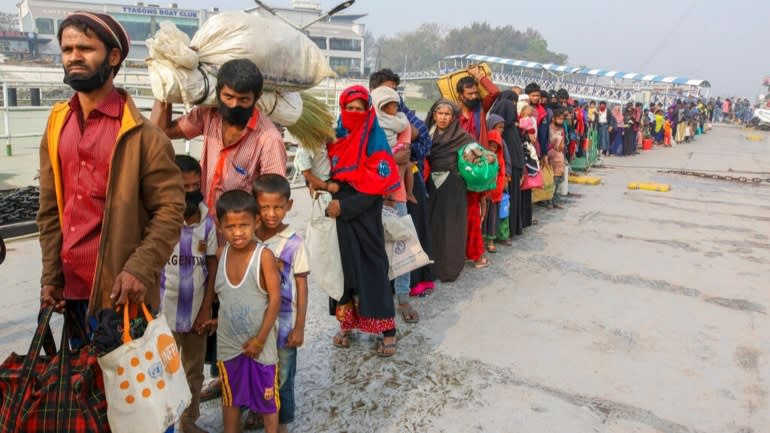 Rohingya refugees headed to the Bhasan Char island prepare to board navy vessels from the south eastern port city of Chattogram, Bangladesh in this file photo.   © AP

However, representatives of both China and Russia, which have cultivated good relations with Myanmar, referred to the putsch as an "internal" matter. The two countries had earlier insisted on watering down language of a U.N. Security Council statement criticizing the coup, although finally agreed to support the call for a return to democracy. They have previously blocked efforts by fellow members of the U.N. Security Council to pass resolutions criticizing Myanmar -- notably for the brutal expulsion of more than 750,000 Rohingya Muslims in 2017.

More worrying for the protest movement, China's U.N. ambassador expressed support for efforts by Southeast Asian governments to broker a compromise plan to support the junta's promise to hold fresh elections in a year.

Junta leader, Senior Gen. Min Aung Hlaing, justified the coup as a response to what he claimed was "grave electoral fraud" in the Nov. 8 poll and promised to hold new elections. The NLD won a crushing victory with about 82% of the popular vote, while the military-backed USDP won just 33 of a total 476 seats, although the constitution allocates one quarter of all seats to military appointees.

The pledge for new elections has been rejected by the protest movement, which has staged daily mass street demonstrations.

It has cracked down violently on protesters, including shooting dead at least four protesters. The Myanmar ambassador's urgent pleas at the General Assembly, together with the U.N. special envoy's condemnation, have provided important momentum to the protest movement and could lead to more defections of senior officials.

But as the escalating civil disobedience campaign paralyzes the country, money, jobs and food are running in short supply. So, too, is the military's patience, seen in recent threats that protesters "risk losing their lives."

The General Assembly session was an extraordinary event but will lose significance if the fresh momentum is not carried forward.If there is a way out of the crisis, it will require swift and coordinated action by international parties to come up with a mixture of incentives and threats to force the junta to the negotiating table and bring the military's protectors -- particularly China -- on board.

It also will be essential to involve leaders of the country's core constituencies, including elected representatives, ethnic leaders and civil society, in any proposed outcome. There should be no backroom deals between regional governments and the junta for a political solution.

Otherwise, warn analysts, violent suppression of protests and international isolation of Myanmar risks punishing civilians, possibly triggering a flood of refugees into neighboring countries and plunging the country back into the dark days of military rule.