BANGKOK -- Myanmar's currency has been depreciating since the Feb. 1 coup, considerably increasing the prices of imported goods.

The value of the kyat against the U.S. dollar dropped 14% in the two months following the coup. While the price of gasoline jumped more than 20%, imported foodstuffs are also becoming expensive, leading to more strains on consumers.

Myanmar chronically suffers trade deficits because of its fragile industrial sector. Less foreign capital inflow through investment and economic assistance since the coup could snowball into further depreciation of the currency and continuing price hikes.

A money exchange in Yangon posted a rate of 1,600 kyat to the dollar for buyers of the U.S. currency on Friday. Under Myanmar's managed floating rate system, which keeps the kyat's rate within a set range, the reference rate set by the country's central bank was 1,330 kyat to the dollar on Feb. 1. 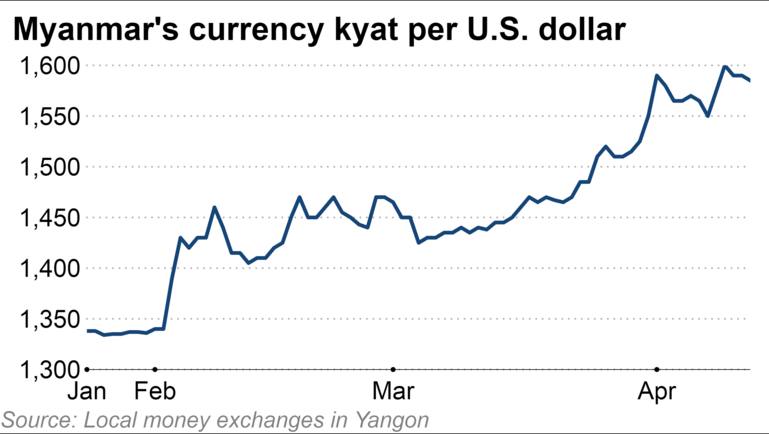 Myanmar relies on imports for many items, including processed food, daily use products and gasoline. Hence, notable depreciations in the kyat lead to consumer price rises. For example, gasoline went for 930 kyat per liter last Saturday, up 20% from 775 kyat on Feb. 2. Propane gas used by restaurants is currently priced at 21,000 kyat per 15 kg, up 23% from 17,000 kyat in January, according to a restaurant operator in Yangon.

The higher costs of account settlements, product distribution and other transactions as a result of anti-coup movements by citizens such as walkouts in key industries may be contributing to price rises, said a local running a propane gas business.

Prices at supermarkets have yet to show major changes. But an official in the distribution industry said that while products currently available were stocked under contracts concluded at previous foreign exchange rates, products under new contracts will likely be priced 10% higher to reflect the new exchange rates. In any event, retail prices will surely move higher, the official said.

Certain food products and seasonings are already seeing significant price effects. According to Linklusion, a delivery service for small shops in the Yangon area, prices for edible oils climbed as much as 31% in early April from late January while cigarettes soared 27% and soybean milk 15%.

The recent higher prices reflect more expensive imports and materials caused by the kyat's deprecation and supply shortages due to businesses slowing or halting operations, according to Linklusion President Hidenori Kuroyanagi. Steven Anderson, representative of the Myanmar office of the World Food Program, the food assistance branch of the United Nations, warned in mid-March that poor households in the country would be unable to have enough food if prices continued to rise.

A 35-year-old day laborer living in the Dala district near central Yangon said he has been out of a job since the coup and has had to borrow money from relatives. Another resident, a 40-year-old woman, said she has lived on nothing but donated rice cooked with oil and salt.

Still, prices for staples have remained largely unchanged. According to a rice store in Yangon, 1.6 kg of rice is going for 2,200 kyat ($1.48), as many confirm that rice prices are pretty much the same since the coup. This could be because that although Myanmar is a rice exporter, supplies are increasing as the political turmoil dampens exports.

Myanmar's trade deficit continues as its industrial sector has never really nurtured exporters. Although the country has made up for this with foreign investment and development assistance, it cannot expect as much access to foreign funds now. At a meeting of Myanmar's State Governing Council at the end of March, junta head Senior General Min Aung Hlaing said Myanmar will be able to reduce dependency on foreign currency if it can produce its own food and consumer goods, indicating a sense of urgency about the shortage of foreign currency.

But in a further hit to the economy, Giesecke+Devrient Currency Technology decided in March to halt supplies of materials, consumables and printing systems to Myanmar's state-run company that prints kyat banknotes. Myanmar began to print its currency in 1972 under the German company's technical assistance, according to an article by the Myanmar Times, which itself halted operations in February. The supply of banknotes may dwindle unless the country receives support from Russia or China.

Myanmar has resorted to demonetization three times, such as in 1964 when it was a socialist nation. A further drop in public trust in the kyat may cause a more serious economic mess.