Protesters hold pictures of those who died during rallies against the junta, and offer prayers for them, in Yangon on April 5. The violence has spurred a scramble for a diplomatic solution.   © AP
KENTARO IWAMOTO and JAMES HAND-CUKIERMAN, Nikkei staff writersApril 8, 2021 15:14 JST | Myanmar
CopyCopied

SINGAPORE/TOKYO -- The Myanmar military's coup and deadly crackdown on protesters have sent shock waves beyond the country's borders, touching off a rush of diplomacy.

The 10-member Association of Southeast Asian Nations, which includes Myanmar, is inching toward an emergency summit after repeated calls from Indonesia, Malaysia and Singapore. Global powers, namely the U.S. and China, are simultaneously urging an end to the violence while also looking out for their own interests and regional influence.

While some progress is expected in the coming weeks -- centered on hopes for an ASEAN meeting in Jakarta -- Myanmar's future is far from certain. Just over two months after the Feb. 1 military takeover, Fitch Solutions on Wednesday said the country was headed toward becoming a "failed state."

What is certain is that the small but once-promising economy has become a focal point of diplomatic attention.

Here are five things to know about the dialogue efforts as the death toll nears 600.

On top of the bloodshed, why has Myanmar become such a high priority?

A fast-growing emerging economy before the COVID-19 pandemic, the country attracted investments from the around the world, especially after it embarked on a transition to democracy in the early 2010s. Singapore, China and Japan all became key sources of foreign direct investment.

Already, the coup has impacted foreign companies' activities in the country, due to factory stoppages and internet disruptions. And the crisis could dampen investor sentiment toward Southeast Asia as a whole.

A bigger concern is the potential for a breakup of Myanmar.

Right now, no one is seriously predicting this scenario, according to Murray Hiebert, senior associate in the Southeast Asia Program at the Center for Strategic and International Studies, a U.S. security think tank. But if it happened, "it could have immense immediate implications for particularly Thailand and China," he told Nikkei Asia. 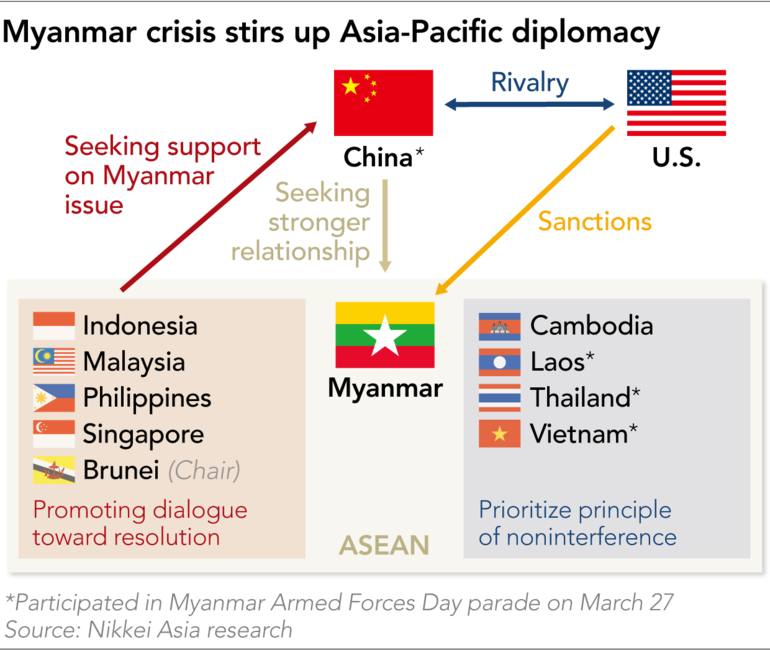 "Fighting between factions could spill across the Chinese and Thai borders and we could expect an outpouring of refugees" fleeing the violence searching for food and health services. "For ASEAN as a grouping, a Myanmar breakup would leave a big void in the 10-nation association and make it harder for the group to meet and function as a whole in dealings with the international community, including the U.S."

Sharon Seah, coordinator of the ASEAN Studies Center at Singapore's ISEAS-Yusof Ishak Institute, warned, "A breakup of the Union of Myanmar will be a disaster for this region and poses a threat to global peace and security."

What is ASEAN doing to resolve the crisis?

ASEAN has come under pressure to address the crisis in its midst. But building a consensus is no easy task.

Traditionally, the grouping adheres to a principle of "noninterference" in individual members' internal affairs. So ASEAN's approach is to promote dialogue, guiding Myanmar toward a peaceful resolution internally.

Unlike the U.S. and European Union, which have moved to sanction Myanmar military officials and military-linked organizations, ASEAN has kept its distance from such penalties.

Nevertheless, some ASEAN countries have been vocal. Indonesian President Joko Widodo on March 19 proposed a special summit to discuss the issue. Malaysia, Singapore and, recently, this year's ASEAN chair Brunei have openly supported this. The Philippines has sought a middle ground, stressing the importance of Myanmar's sovereignty while calling for "a complete restoration of the status quo ante" and urging the junta to allow ousted State Counselor Aung San Suu Kyi "to play her unifying role."

On the other hand, four Indochina nations -- Cambodia, Laos, Thailand and Vietnam -- clearly prioritize the noninterference principle and have been relatively quiet, though Bangkok has said it is "gravely concerned."

Laos, Thailand and Vietnam all had representation at Myanmar's Armed Forces Day parade on March 27 -- the same day the military unleashed one of its most brutal crackdowns.

Earlier this week, Brunei Sultan Hassanal Bolkiah and Malaysian Prime Minister Muhyiddin Yassin announced in a joint statement that they had asked aides to undertake preparations for the special summit.

They said the meeting would be held in Indonesia's capital Jakarta, where the ASEAN Secretariat is located. They stopped short of saying when.

Achieving the summit would be a significant step, but there are doubts over the chances of meaningful results.

"If Myanmar agrees to attend, there will be a repeat of imposition of certain conditions on the agenda and the outcome," Seah said.

The meeting might not even focus solely on Myanmar. When the bloc's foreign ministers held informal virtual talks on March 2, the crisis was only one item on an agenda that also covered topics such as COVID-19.

That meeting produced a chairman's statement calling for "all parties [in Myanmar] to refrain from instigating further violence, and for all sides to exercise utmost restraint as well as flexibility."

Hundreds of civilians have been killed since.

How does China fit in?

China appears to have found an opening to shore up ties with ASEAN, despite territorial disputes with several members.

Throughout these sessions, Wang stressed that China supports ASEAN's approach to the Myanmar crisis, including the proposed summit. "No one cares more about what is happening in Myanmar than ASEAN and China," Wang told Chinese media afterward, according to a transcript released on Monday. Anti-coup protesters hold a Chinese flag before burning it in Yangon on April 5. China has backed ASEAN efforts to resolve the crisis, but its influence is viewed with suspicion.   © Reuters

Among anti-junta protesters, China is widely viewed with suspicion. But Wang criticized other countries for interfering in Myanmar, without naming names. "We all believe that we should be wary of external forces with ulterior motives to infiltrate and intervene, stir up troubles, intensify contradictions, and further complicate the situation in Myanmar," Wang said.

"We all hope that the international community will uphold an objective and fair attitude and create a favorable external environment for Myanmar's domestic political reconciliation, instead of arrogantly acting on its behalf and imposing sanctions and pressure at will."

Does the Myanmar crisis affect the U.S.-China rivalry?

The Myanmar crisis "adds another irritant into the China-U.S. relationship that already includes tensions in the South China Sea and over the treatment of Uyghurs in Xinjiang, the handling of Hong Kong and Taiwan, economic and trade disputes and sharp differences over democracy and human rights," said Hiebert of CSIS.

"The U.S. and China might be able to have some impact if they worked together to tackle the Myanmar crisis, but so far they are sparring at the United Nations with China refusing to consider sanctions."

He pointed out that China is anxious about having a pro-U.S. government in power in Myanmar, or any pro-American faction opposed to the ruling military junta operating near or along China's border.

Meanwhile, the U.S. is also seeking to firm up relations with ASEAN. Last week, Secretary of State Antony Blinken had a call with Malaysian Foreign Minister Hishammuddin Hussein a day before the latter's visit to China. They discussed regional issues including Myanmar and the South China Sea.

Seah of ISEAS-Yusof Ishak Institute said that "China and the U.S. have as much interest as the other to prevent an outbreak of widespread violence in Myanmar."

In this respect, the push for ASEAN dialogue suits both big powers.

"For as long as ASEAN is trying to get some kind of consensus to move on the Myanmar problem, ASEAN is a great cover for both the U.S. and China."