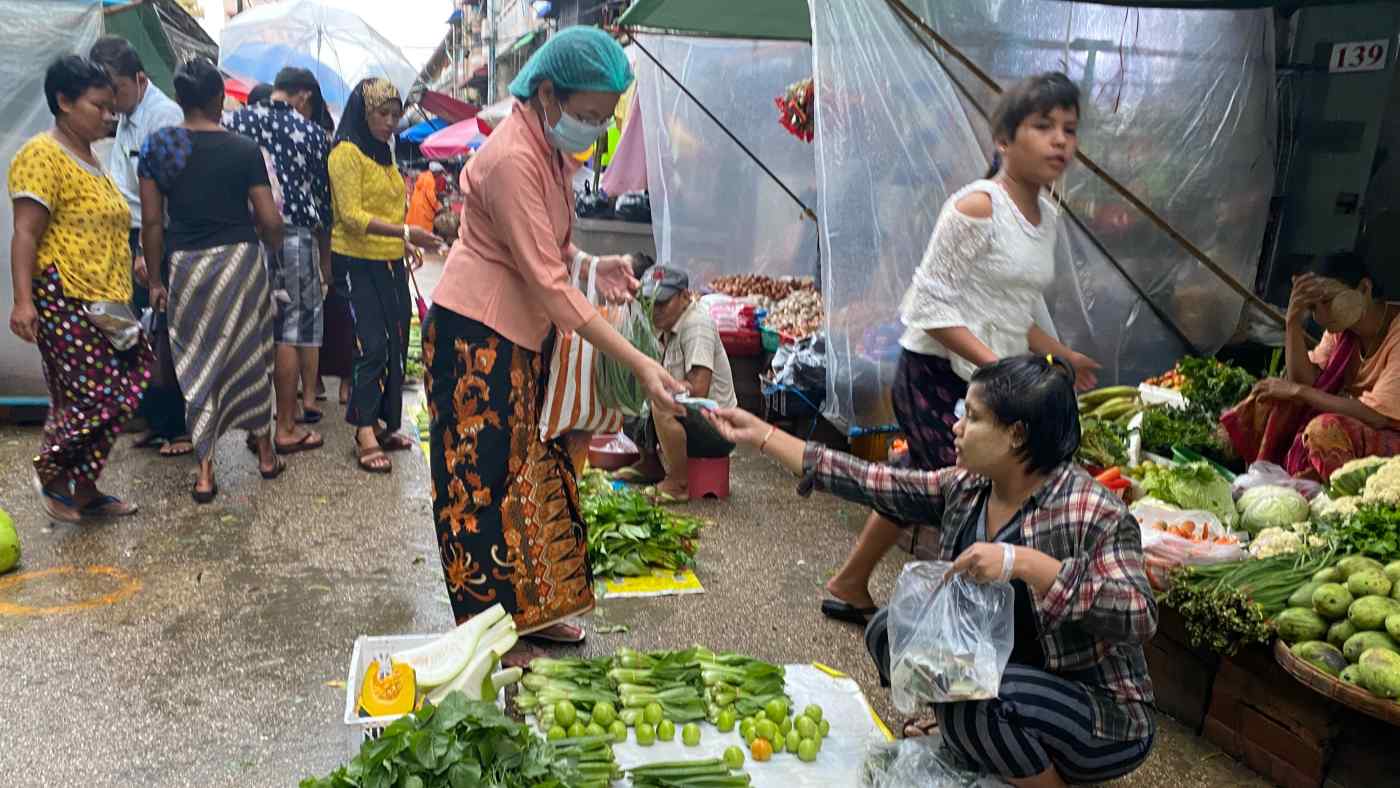 A consumer buying vegetables at a local market on June 15. People are gradually coming back for shopping and working, but continue concerning about cash shortage.
Nikkei staff writersJune 18, 2021 17:24 JST | Myanmar
CopyCopied

The shortage is unlikely to be resolved anytime soon, as the central bank is reluctant to increase the supply of cash, fearing the depreciation of the nation's currency, the kyat, and inflation. With employees and suppliers demanding payment in cash, more businesses are suffering.

Messages for trading in cash are posted by individuals on social media sites, such as "Cash 500 available at KBZ. 6.5%. FtF in YGN." That message, whose number refers to lakh (100,000 kyat), means "50 million kyat (about $30,000) will be delivered face-to-face if that amount is deposited, with a premium of 6.5%, in an account at Kanbawza Bank in Yangon."

KBZ Bank, the biggest privately held bank in Myanmar, allows depositors to withdraw up to 200,000 kyat in cash from automated teller machines per week. But because cash withdrawal is possible only at a limited number of ATMs, depositors flock to them from early morning, immediately forming lines of more than 100 people.

The stagnation of banking services initially started as bankers took part in the civil disobedience movement to protest the military coup, resulting in manpower shortages at banks. The situation shows few signs of improvement, although bankers have returned to work since mid-April under toughened crackdowns on protesters by the military. Concerns are still spreading among consumers that cash, once deposited, cannot be withdrawn, adding fuel to the continuous efforts to withdraw cash.

Foreign companies operating in Myanmar say they cannot cope with increasing demand from local employees to pay them in cash instead of through bank transfers. An increasing number of suppliers and other business partners are also demanding payment in cash.

Theoretically, the problem could be solved if the central bank printed more bank notes and supplied them to banks. But financial experts believe it is refusing to do so because it fears that increasing the amount of cash in circulation will lower the value of the kyat and trigger inflation. The one-way outflow of deposits has left commercial banks in a precarious position.

"The more cash is supplied, the more people will withdraw cash and convert it into the U.S. dollars as a safe currency," said a foreign banker. "The central bank is afraid of a deterioration of banks' business conditions and the kyat's depreciation."

As of Friday, the kyat was quoted at 1,595 to 1,605 per dollar at commercial banks, down 17% from the pre-coup exchange rate. The rate once fell below 1,700 kyat in May, prompting the central bank to carry out dollar-selling market interventions.

Google's COVID-19 Community Mobility Reports indicate that the level of people going out in public in Myanmar has returned close to the pre-coup level. At retail shops and amusement facilities in Yangon, for example, customer levels temporarily plunged to 90% of the pre-pandemic level but have firmed back to around 50%. But consumption remains sluggish due to the shortage of cash and rising prices, on top of an increase in unemployment resulting from slowed corporate activities. "People come out to work as much as possible," said a male street vendor of vegetables. "They don't buy vegetables at all because they cut spending to the bare minimum."

A male wholesaler of rice, 33, said, "I used to make payments [for rice] via bank transfer, but brokers now refuse to sell unless I pay in cash."

Prices of the staple food have risen since early May by an estimated 10% to 15%. Higher prices of gasoline, which is imported, have raised the costs of product distribution, and so prices of poultry and pork have also risen.

The Purchasing Managers' Index in the manufacturing sector came to 39.7 in May, up from 33.0 in April, according to British research firm IHS Market. But the PMI remains far below a reading of 50, the level indicating that manufacturers have begun to see an improvement in business. The stagnant flow of capital has caused a delay in procurement of raw materials and other necessities.

The central bank has stressed the safety of bank deposits in a desperate attempt to encourage citizens to resume depositing their money. In early May, it permitted the opening of "special accounts" subject to no limit on withdrawals, with certain conditions. But such efforts are possibly seen by consumers as meaning that commercial banks are still struggling with the lack of cash, making account holders reluctant to deposit. As popular trust in banks, damaged by the coup, is unlikely to recover anytime soon, the confusion is expected to continue for some time.