Retail, trade and market activity wither amid protests and crackdown A man flashes the three-finger salute as he passes burning tires during a protest against the military coup in Mandalay.   © Reuters
YOHEI MURAMATSU and KOYA JIBIKI, Nikkei staff writersApril 2, 2021 05:15 JST | Myanmar
CopyCopied

BANGKOK/JAKARTA -- Located in a vibrant region and with a sizable population, Myanmar was viewed as one of the most promising countries as it emerged from isolation. But two months after the Feb. 1 military takeover, the country's economy has ground to a near-standstill.

As an increasingly violent crackdown makes it more difficult for demonstrators to take to the streets, people are engaging in civil disobedience, including staying home from work, to undermine the junta and its economic interests.

The result has been a drastic decline in activity that is likely to only be exacerbated by sanctions in response to the violence against protesters.

Google Maps mobility data for late March shows nationwide foot traffic down as much as 85% from pre-coronavirus baselines in the "retail and recreation" category, and down as much as 80% for workplaces. Immediately after the day of the coup, the drops reached around 30% to 40%. Late-March residential traffic was up roughly 20% to 30% from the baseline as more people stayed home.

A "silent strike" called on March 24 shuttered businesses including supermarkets and convenience stores, spurring a scramble by the military to force them to stay open.

On the day of the strike, authorities in Yangon called dozens of managers and other staff members at retailers including City Mart, the country's largest supermarket chain, to a government office. They were essentially detained there for more than 24 hours as officials demanded to know why the stores had closed and who had masterminded the move. The March 24 "silent strike" kept people off the streets in cities such as Dawei.   © Reuters

Staffers were forced to sign a pledge to inform authorities of any plans to shut down their stores. "If we can't even choose for ourselves what days to operate, what are things going to be like going forward?" a retail industry insider asked.

The drop in activity has hit smaller businesses, such as a fruit seller in an area of Yangon now under martial law. "There's normally a lot of traffic, but lately I've been closing at noon most of the time because there are no customers," the 63-year-old man said.

Meanwhile, international flows of goods have been drying up.

Government data for the week through March 12 shows $252 million in exports and $254 million in imports, down 30% from the weekly average in December and January. With many customs officials and transportation businesses joining in the strike, "there are a lot of containers backed up at ports," a representative at a Japanese logistics company said.

A.P. Moller Maersk, the world's largest container-shipping company, temporarily suspended office and warehouse operations in Myanmar in early March to "ensure the physical safety and mental health" of its employees.

Flows of cash and capital -- the lifeblood of an economy -- have fared little better. Overall turnover for the six companies listed on the Yangon Stock Exchange averaged 6.31 million kyat ($4,400) per day for the five trading days through Wednesday, an 85% plunge from the week before the coup, and activity is unlikely to pick up until the political turmoil subsides.

Branches of private banks have been closed since mid-February, preventing customers from making large withdrawals or international transfers. Cash refills for some ATMs resumed in mid-March, but access to money remains restricted. Some banks on Tuesday lowered the daily withdrawal limit to 200,000 kyat from the 500,000 kyat cap set by the central bank. 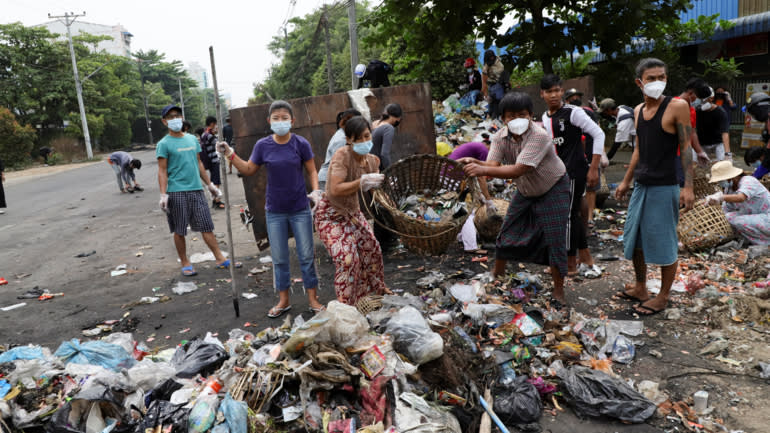 Protesters piled trash on the streets of Yangon as part of a "garbage strike" on Tuesday.   © Reuters

"Local construction sites in particular are short on cash, and at this rate they won't be able to keep working because they can't pay for labor," a local manager at a Japanese construction company said. A transportation business cited the inability of importers to pay tariffs as a factor slowing down customs processing.

Myanmar's central bank has threatened to fine banks for every week they remain shut down, according to local media.

The coup threatens to depress growth that had just picked up over the last decade after years of development-stunting economic policies followed by international sanctions. The World Bank recently forecast a 10% contraction in Myanmar's economy this year in a sharp reversal from the October forecast of 5.9% growth, one of the strongest rates of expansion in the region.

Since the U.S. and European countries began to ease and lift sanctions in 2012, annual growth had been around 5% to 8%.

Business sentiment has turned sharply bearish as well. The IHS Markit Myanmar Manufacturing Purchasing Managers' Index for March, released Thursday, came in at 27.5 to remain far below the break-even point of 50 after a plunge the previous month.

And as big Western economies respond to the crackdown with widening sanctions, the situation does not look likely to improve anytime soon.