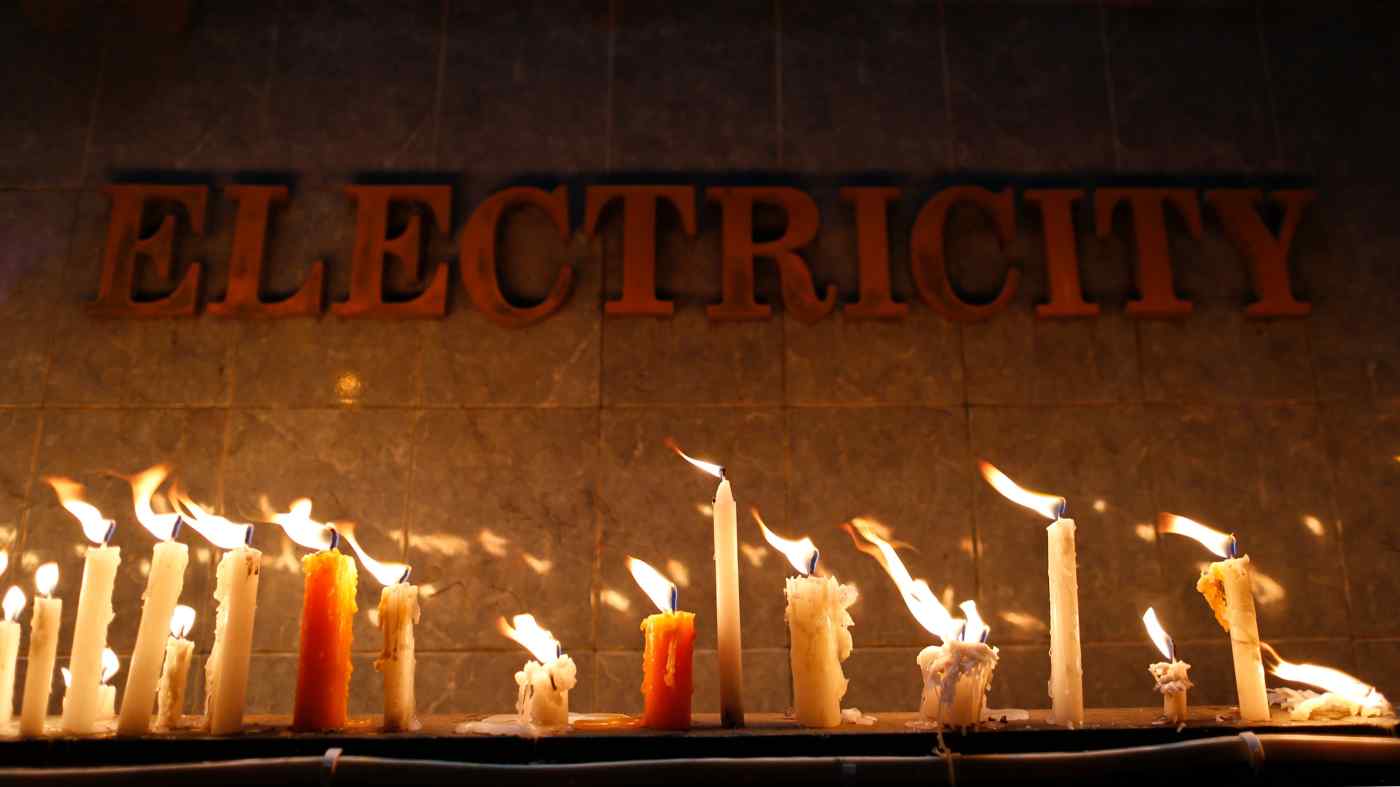 The price of candles in Myanmar is going up: Power supplies are on the verge of collapse because most Burmese have refused to pay their electricity bills since the military's seizure of power in February.   © Reuters
GWEN ROBINSON, Nikkei Asia editor-at-large, and RORY WALLACE, Contributing writerJuly 25, 2021 14:40 JST | Myanmar
CopyCopied

BANGKOK/YANGON -- Myanmar's electricity supplies have been threatened by collapsing revenues since the Feb. 1 military takeover, with urban areas suffering frequent power failures and prolonged blackouts amid a widespread boycott of electricity bill payments.

Unreliable power supplies are adding severe pressure to the threadbare public health care system as a third wave of COVID-19 rampages. The country's confirmed cases have surged to record levels. Official figures show an average of 6,000 new cases daily for a total of 250,000 to date with 6,000 deaths recorded, mostly since mid-June. Because testing has been so limited, medical experts believe the true figures are much higher.

A nationwide civil disobedience campaign against military rule has seen many refuse to pay their electricity bills. Revenues at the Ministry of Electricity and Energy (MOEE) have plunged by over 90% since Feb. 1 compared to the same period last year, according to internal data seen by Nikkei Asia and a recent report by Independent Economists for Myanmar (IEM), a group of Myanmar-focused economists.

State hospitals, which account for most of the country's medical facilities, have not been spared and are increasingly forced to rely on generators at a time when fuel prices continue to rise sharply.

Following the takeover, the ministry "has struggled to operate the existing infrastructure, honor contractual obligations to independent power producers, cover its costs and to follow through on the previous pipeline of new projects," said the report. Volunteers pray in front of COVID-19 corpses in Mandalay on July 14. Myanmar is being convulsed by the pandemic and its hospitals have no power.    © Reuters

The military takeover has stalled some important reforms in the energy sector, including digital metering, better warnings about power cuts, steadier currents, reliable electricity, new installations and a shift towards renewables, the report said.

At least 4,058 ministry staff have been dismissed for participating in the civil disobedience movement or have quit their jobs since Feb. 1, the report said, noting that power outages "are likely to become more common and longer."

Before the takeover, the ministry had about 50,000 staff, many of them dating from a merger of two ministries, according to a former MOEE official. The departure of over 4,000 has had a "crippling impact," he said, as they include mid-level managers and key people on the technical and revenue collection sides. "The combination of COVID-related tariff reductions, rising costs of new gas plants and boycotts of electricity payments is generating billions of dollars in losses for the government," the paper said.

The findings suggest that the sharp decline in bill payments, alongside boycotts of tax and other payments, will severely impair maintenance of aging power generation and grid infrastructure.

"Myanmar has limited ventilators and intensive care units to begin with and, worryingly, continued disruption to power supply can put these facilities at risk," Tim Dobermann, an economist at the London School of Economics who advised MOEE under previous governments, told Nikkei. "If clinics and hospitals providing critical care cannot use back-up sources of electricity, patients will suffer," he told Nikkei. "Power outs are often an inconvenience; at this moment in Myanmar, it can mean death."

Despite soaring COVID-19 cases, the military regime has so far shown no willingness to compromise with anti-coup medical professionals. It has refused to release doctors from detention or provide health workers with security guarantees.

Public anger at the treatment of health workers deepened last week when reports went viral on social media of how five striking doctors who had been treating patients underground were arrested after being tricked by security forces into answering an emergency call to help COVID-19 victims. In March, MOEE collected 100 billion kyats ($60.5 million) less than in January, the month before the military takeover, according to the report.

A recent government document seen by Nikkei and verified by former MOEE officials, shows that monthly collection rates in Yangon and Mandalay, the country's two largest cities, have fallen to just 2% and 3% respectively of pre-coup levels. If the bill boycott continues, the ministry's combined losses in the electricity sector could reach 2-2.5 trillion kyats ($1.2-$1.5 billion) this year, equivalent to 10% of all state fiscal revenue, IEM said.

The last government, led by the National League for Democracy (NLD), raised electricity tariffs in 2019, but Myanmar still had some of lowest household electricity rates in Southeast Asia.

Anti-coup groups led by the parallel National Unity Government, which is dominated by NLD politicians, have said that households should be exempt from monthly electricity bills and have requested relevant government departments to maintain supplies irrespective of non-payments.

The IEM report highlights the difficulties now facing businesses involved in power generation and energy. Echoing the NUG's warnings, the report's authors cautioned against becoming commercially involved in the power sector. This comes not long after the military regime, or the State Administration Council, called for tenders to construct solar power facilities.

"The civil disobedience movement has had a massive effect on the electricity sector, which is hemorrhaging cash," the main author of the report told Nikkei. "From a business perspective, companies should be very careful of getting into bed with a government in financial freefall, and which doesn't seem committed to respecting contractual obligations."

Impulsive and ill-informed decision-making by the State Administration Council has heightened country risk for energy sector investors, the report said. Some have suspended their activities already or pulled out. These include Electricite de France, Woodside Myanmar and the mostly Chinese companies that won a solar tender in 2020. Others are taking a "wait-and-see approach," it said. 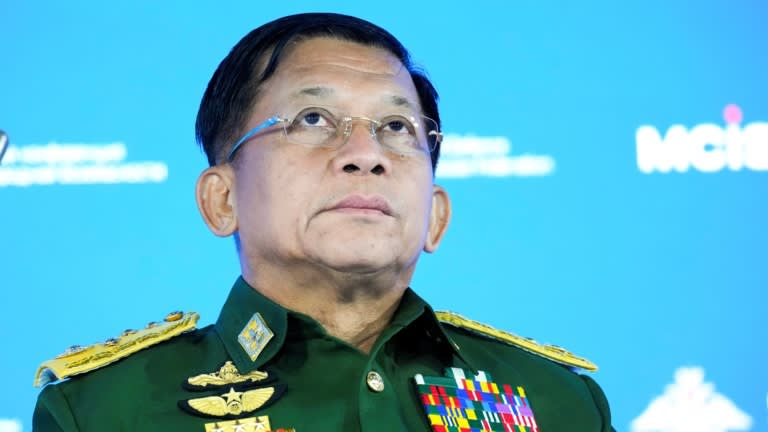 The lights finally going out in Myanmar may prove to be a lightbulb moment for Senior General Min Aung Hlaing, whose seizure of power on Feb. 1 has transformed this country of 54 million into a failed state.    © Reuters

Most of Myanmar's electricity is generated from hydropower and offshore gas. However, with natural gas resources being depleted, and dwindling funds available to import fuel, the military regime is continuing the shift initiated by the NLD government toward alternative energy sources.

In one of the first major public tenders since the military takeover, companies were invited in late May to bid on the construction of 12 solar plants in central Myanmar that would generate between 20 and 40 megawatts each on a build-operate-own basis for 20 years. A previous solar power project started under the last government is at a standstill along with a number of other energy projects.

"The coup effectively nullified the 2020 solar tender, paused most upcoming liquefied natural gas projects, and forced foreign stakeholders involved in the development of new offshore fields to halt their activities, at least temporarily," the report said.

"Sources within the ministry believe that most sites have already been allocated and the tender is therefore unlikely to be competitive," IEM said.

Meanwhile, political risks have heightened for energy companies. The case of Hong Kong-listed VPower, the dominant supplier of rental gas plants in Myanmar, might be a pointer to what is in store foreign investors in infrastructure, the report said. VPower is among companies that have been called out for doing business with military-owned companies.