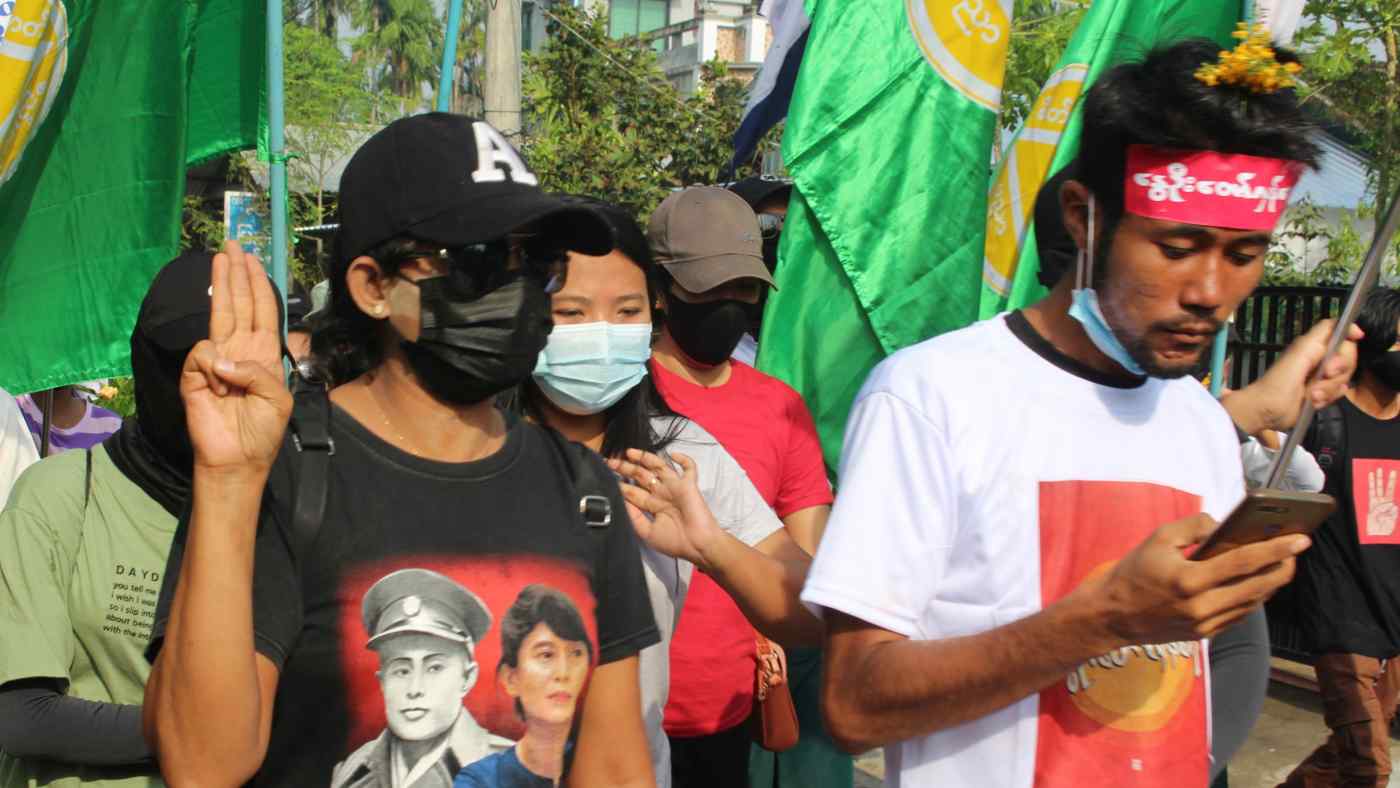 Myanmar's military has tried to control the widespread civil disobedience movement's access to telecommunications and social media in the aftermath of its coup on Feb. 1.    © Reuters
JOHN LIU and RORY WALLACE, Contributing writersMay 26, 2021 22:24 JST | Myanmar
CopyCopied

BANGKOK/TAIPEI -- Myanmar's National Unity Government, a parallel government set up by lawmakers elected in November's general election, has had to adopt a more realistic approach to the way companies like Norway's Telenor and the investment community conduct business.

"The military has been using various means to threaten and extort money," Tu Hkawng, the NUG's environment and natural resources minister, told Nikkei Asia in an interview from an undisclosed location. "Companies such as Telenor have no choice but to follow these instructions due to security concerns."

The NUG previously urged businesses to refuse all payments to the junta.

"We will not push Telenor into a corner," said Tu Hkawng, acknowledging the dilemmas companies face if they wish to support human rights.

The NUG was formed in April and includes elected politicians, activists and community leaders from across Myanmar operating underground or in exile.

Its two most senior officials after President Win Myint and State Counselor Aung San Suu Kyi, both of whom were arrested during the Feb. 1. coup and stripped off their positions, are Vice President Duwa Lashi La, a Kachin, and Prime Minister Mahn Win Khaing Than, a Karen who used to be the speaker of parliament. 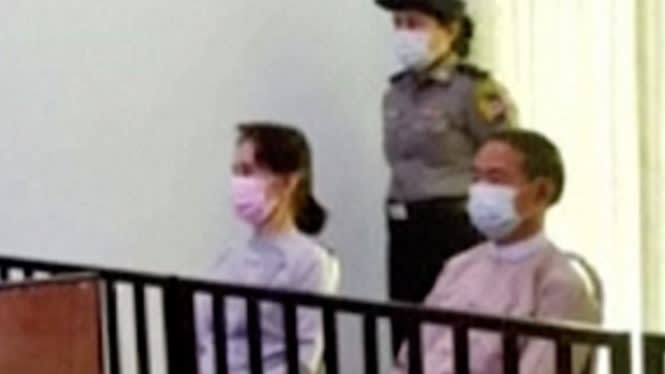 Myanmar's arrested leaders, State Counselor Aung San Suu Kyi, left, and President Win Myint, went on trial on May 24. They are nominally the two most senior figures in the parallel National Unity Government, which is struggling to engage with foreign governments and the international business community.    © Reuters

NUG politicians have recently met European and U.S. ambassadors and officials. Although there has been help with offices and capacity building, the NUG still lacks official recognition. The Association of Southeast Asian Nations did not include it at the special Jakarta summit in April, but did invite the coup maker, Senior Gen. Min Aung Hlaing.

While having some say in the civil disobedience movement, ethnic resistance and on sanctions, the NUG has struggled for any impact on the business community, which the regime has tried to double down on. It has no control over state organs.

The NUG's softer stance on business tries to address some of these limitations. Tu Hkawng, a Kachin and independent cabinet appointee, told Nikkei that the NUG differentiates between investments that predate the Feb. 1 coup and business engagements by foreign and local companies with the military signed later -- which he called "unacceptable."

"We will release a blacklist of those companies who engage with the military," said Tu Hkawng. "The message I would like to pass on to investors is please do not do any sort of business with the State Administration Council."

The NUG's finance and investment ministry used social media on May 23 to announce a boycott list of military-affiliated companies including Posco, the South Korean steelmaker that operates a gas field in Myanmar. The ministry described such businesses as the "lifeblood bringing revenue to prolong the existence of the terrorist military."

The junta is meanwhile busy trying to drum up fresh investment. The Myanmar Investment Commission said it had approved 25 proposals since Feb. 1 from countries like China, Singapore and Thailand, but did not give details.

The largest is a liquefied natural gas power project worth $2.5 billion approved in May. Local media believe it is the Mee Lin Gyaing Electric Power project in the southwest, which is being developed by a consortium of three Chinese state companies and Myanmar's Supreme Trading.

The Ministry of Electricity and Energy on May 24 invited construction bids for 12 solar plants, according to a tender notice seen by Nikkei.

Tin Tun Naing, the NUG's finance minister, asked investors to "refrain from submitting all applications" to the commission, warning that the elected government would not honor permits issued by the body if it came to power.

Regarding tax boycotts, Tu Hkawng said it depended on the individual company: "For those who have implemented their infrastructure nationwide under previous governments, such as Telenor, we can understand that they are working for the long-term and we have to take into consideration whether people could be disadvantaged if they halt payments," he said, noting wide reliance on the telco operator for communications.

"But for those who can stop immediately, such as import and export businesses which have large amounts of cash going to the junta, we would like these companies to stop their services," he said.

Dr Sasa, the NUG's minister of international cooperation and best known face, told Nikkei that after the parallel government opens bank accounts in Thailand, it will ask Thai businesses in Myanmar to pay their taxes to those accounts. Other foreign investors will be asked to pay to NUG accounts in their respective countries. He said investors would then be transferring money "to the Myanmar people through the people of Myanmar's government, that is NUG."

It is, however, not clear that this would be feasible given the likelihood of harsh repercussions from the junta against companies that withhold tax. Central banks elsewhere might also be unhappy with such arrangements.

Telenor began operations in Myanmar eight years ago and always disclosed directives from the Ministry of Transport and Communications. In mid-February, it announced that it was "no longer possible to do so." The Norwegian multinational earlier this month wrote off its entire US$783 million Myanmar investment in light of the worsening security and human rights situation. The company has also taken open exception to the junta's attempts to confine internet access to selected banking and business apps while trying to ban broader usage. Telenor's flag flutters brightly over its headquarters in Fornebu, Norway, but not in Myanmar where an eight-year presence and nearly $800 million investment are in jeopardy.    © Reuters

Telenor is one of over 230 companies to have signed a collective statement of "deep and growing concern" about developments since the coup issued through the Myanmar Center for Responsible Business. The signatories, facilitated by its director, former U.K. ambassador Vicky Bowman, called for respect for human rights, democracy, unrestricted information access and rule of law.

Japanese brewer Kirin and Singaporean tycoon Lim Kaling are among those who announced plans to cut ties with military entities within days of the coup.

Many consider the NUG demands unrealistic. The generals have meanwhile dialed up coercive pressure on businesses not to support the civil disobedience movement and to resume operations.

Supermarket and bank staff were detained by the military authorities and told to return to work. Private hospitals and media companies opposed to the regime have had operating licences revoked, and employee security remains a major issue.

"It is a significant dilemma," a major foreign investor told Nikkei on condition of strict anonymity. "Stopping tax payments would of course put pressure on public revenues, but the question is whether it would have any real impact. Doing so would likely expose staff and partners to unacceptable security risks."

Multinationals such as Total of France and Heineken of the Netherlands have continued to pay taxes despite the NUG's pleas. Total CEO Patrick Pouyanne said last month that this was to protect staff from forced labor and possible arrest, and also to maintain electricity supplies.

Local protesters and businesspeople have also raised concerns about key companies suspending operations, citing the risk of massive job losses for vulnerable communities in the garment industry or the loss of telecommunications if Telenor pulls out.

Although brands like Sweden's H&M and the U.K.'s Primark have started placing orders in Myanmar again, the garment industry hangs in limbo. In a paper published this month, EuroCham Myanmar argued that the exit of garment manufacturers would hurt hundreds of thousands of workers and their dependents, and that the industry provides few direct benefits to the military and the regime.

"One of the ways in which parts of the business community can use its leverage is to engage with the NUG -- either in public or private if the security situation is too dangerous -- to get a better understanding of NUG's expectations for how they operate in this context with the brewing humanitarian crisis," Jared Bissinger, a development economist focused on Myanmar, said.

"It's becoming more clear by the day that it is important for businesses to keep people employed. In the long run this helps -- not hurts -- the NUG and the civil disobedience movement because working people are going to be able to provide for their families and enable them to keep resisting the regime," Bissinger told Nikkei.