Virulent strain could kill 80,000 Burmese in weeks and spread regionally 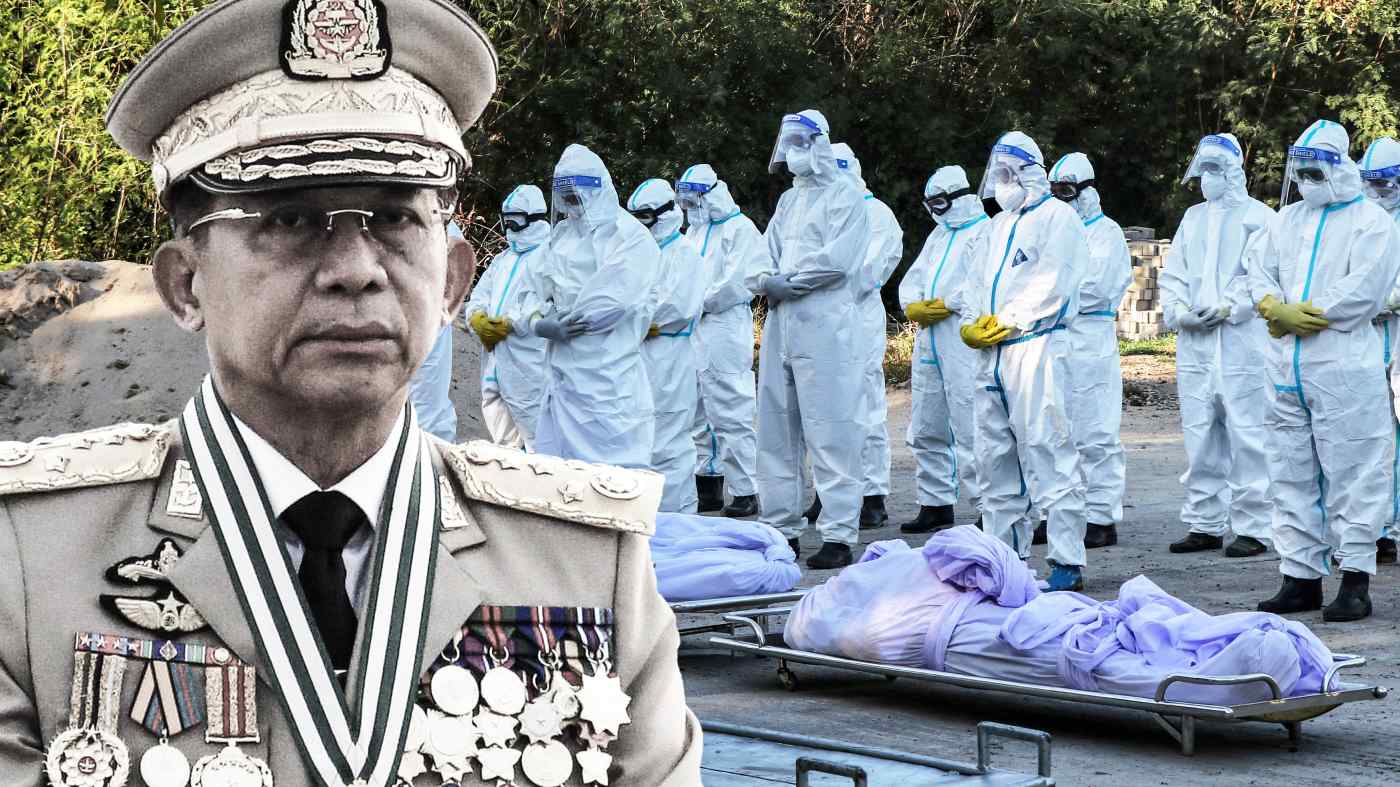 The biggest crisis facing Myanmar after Senior Gen. Ming Aung Hlaing's Feb. 1 coup may not be his demolition of democracy and the economy. An unchecked third wave of COVID-19 threatens tens of thousands of Burmese -- and possibly others in neighboring countries. (Source photos by Reuters)
DOMINIC FAULDER, Nikkei Asia associate editorAugust 8, 2021 10:00 JST | Myanmar
CopyCopied

BANGKOK -- When Cyclone Nargis slammed into Myanmar's heavily populated Irrawaddy Delta in May 2008, it killed almost 140,000 people. It was the worst natural disaster in Myanmar's recorded history.

Worse may now be in store for Myanmar and the region as an uncontrolled third wave of COVID-19 sweeps across a country where state hospitals have been shut for six months.

"The possibility of Myanmar becoming the world epicenter of the COVID crisis is very real, and it's a danger for everybody," Kobsak Chutikul, a retired Thai ambassador who closely monitors developments in Myanmar, told an Asia News Network webinar on Aug. 2.

"We are behind the curve now, and have to act immediately," he said, raising the specter of a "COVID tsunami" drowning the region.

Civilian medical personnel walked out as part of a massive national civil disobedience movement (CDM) against the military takeover on Feb. 1. With access to some 60,000 state hospital beds largely denied, many have been left to gasp their final breaths at home. A hidden cost of the political standoff is the number of avoidable deaths from simple medical neglect, likely in the tens of thousands. The number of people killed directly since February by military and police has been closely tallied, however, and is now approaching 950.

Deaths in Yangon, the largest city, have exceeded 2,000 per day in recent weeks, according to Democratic Voice of Burma reporters still on the ground.

"The coup has resulted in a near total collapse of the health care system, and health care workers are being attacked and arrested," Barbara Woodward, the U.K. ambassador to the United Nations said at an informal meeting of the Security Council on July 28.

"The virus is spreading through the population very fast indeed," she said. "By some estimates, in the next two weeks, half of the population of Myanmar could be infected."

If that proves to be the case, based on a conservative COVID-19 morbidity rate of 0.003% in a population of 54 million, some 80,000 Burmese will die in the coming weeks. 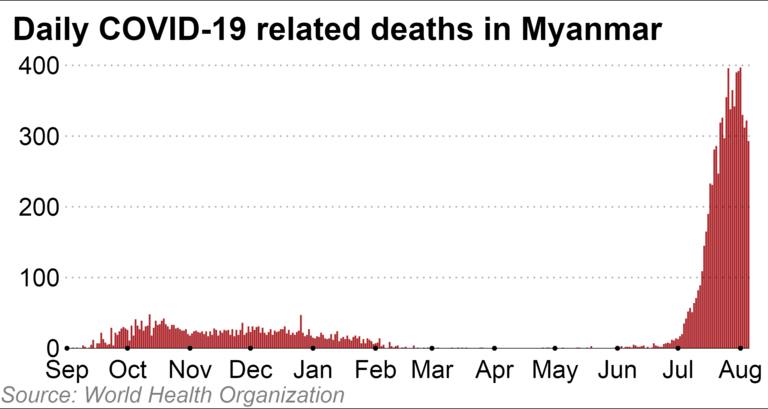 "The worst is yet to come with the third wave of COVID-19 in Myanmar," Zin Mar Aung, foreign minister for the parallel National Unity Government, told ANN. "Transmission in Myanmar has not reached its peak yet -- it is two or three weeks before the highest number of cases."

The military forces are reported to have arrested 137 CDM doctors. Medical personnel still functioning believe they are seeing higher morbidity than elsewhere. Scratching the surface, some 15,000 tests are being done daily with 37% returning positive.

"Compared to the previous waves, many more patients have died," a CDM doctor told Nikkei Asia. "We cannot tell exactly whether the death rate and severity are due to new variants or lack of proper management, but based on the current situation, new mutations can be happening now or in the near future."

Testing is needed to determine whether Myanmar is generating COVID-19 variants as did India, Brazil and South Africa, among others. There are only two facilities capable of conducting the necessary initial gene analysis, one in Yangon under the health and sports ministry and another in a military facility. Myanmar is facing an acute shortage of oxygen and tanks after the military coopted supplies. There have also been reports of brutal dispersals of people queuing at filling stations.   © Getty Images

"This is not something that can be done without international cooperation as it requires comparing the differences with the variants in other countries," a medical expert in Yangon told Nikkei. Neighboring Thailand, however, is well equipped to carry out such analyses.

The military regime, or the State Administration Council, has not grasped the enormity of the health crisis. On Aug. 1, six months after he seized power, Senior Gen. Min Aung Hlaing denied culpability.

"These facts are being misrepresented in the news media and on social media," he said in a televised address. Instead, he blamed protesters: "Various gatherings and crowds across the nation after 1 February were designed to spark the infection of variant COVID-19 species."

On July 27, authorities announced that 10 new crematoriums have raised Yangon's cremation capacity to 3,000 cadavers per day, sufficient to handle slightly over 20% of the city's population of 5.4 million in a year. Yay Way Cemetery near Yangon International Airport has recently been equipped with a new crematorium than can incinerate five cadavers at a time. The former capital's cremation capacity has been raised to 3,000 per day with the construction of ten new crematoriums.    © Getty Images

"I have seen more deaths in the last four weeks than at any time in my 37-year career as a doctor," Frank Smithuis, a Dutch doctor with Medical Action Myanmar, one of the few organizations currently operating centers to treat patients with severe infections, told Nikkei.

Smithuis, who is also a professor at Oxford University, believes that Myanmar's pandemic has been devastating for a number of reasons beyond the collapse of the health care system. One was the country's lack of COVID immunity. Compounding low vaccination rates, the population acquired little natural resistance from earlier waves -- a similar experience to Cambodia, Thailand and Vietnam that once seemed to be doing so well.

"The first two waves in Myanmar were very, very small, unlike in Europe," said Smithhuis. "That virus was not as easily transmitted as the new variant. It is the new variant that has exploded. In India, they had the advantage of a bigger second wave which left some level of immunity. They also had a higher vaccination rate. In Myanmar, the vast majority of people did not have a previous infection."

An additional problem is that health care has been drawn into the recent political conflict. "Everybody is blaming everybody else," he said. "That is, of course, very bad for the treatment of patients."

An epidemiologist in Yangon who declined to be identified suspects that half the populations in the worst-affected areas are already infected. These areas include parts of Yangon and Chin State, which borders India, where the highly infectious and marginally more lethal delta variant originated. "It clearly came from there and is most likely the same variant," the epidemiologist said.

By some estimates, only about 40% of Myanmar's medical capacity is functioning in military facilities, private hospitals and clinics, emergency centers and CDM networks. Oxygen became virtually unobtainable after the military co-opted supplies, and there have been reports of brutal dispersals of civilians queuing to refill cylinders.

But remoter parts of Southeast Asia's second-largest country may remain relatively unaffected, and some insurgent areas have done better containing the virus than parts nominally under military control.

The Karen National Union operates a basic health care system that could provide a springboard for medical aid from Thailand. Although the now dominant delta variant from India has already reached ASEAN, experts want the Myanmar-Thailand border turned into a buffer zone with mass inoculations on both sides.

Myanmar's COVID threat goes well beyond ASEAN, however. Lodged between India and China, it borders 38% of the world's population -- including Bangladesh (population: 163 million), which abuts deeply troubled Rakhine State. 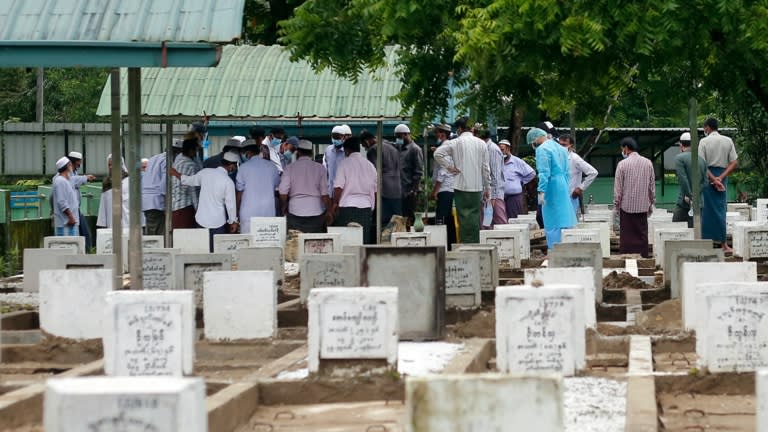 Funeral of a Muslim COVID-19 victim in Yangon. Some experts fear tens of thousands more deaths across the country before September.    © Getty Images

Bangladesh is 13.5 times more densely populated than Myanmar, and in lockdown until Tuesday. Confirmed daily cases there have continued rising steeply to over 16,000.

China is supplying vaccines to Kachin and Wa insurgents operating along its Yunnan border, the country's back door. "All Yunnan government administrators have been told that fighting COVID is their only priority in the next six months," Emma Leslie, executive director of the Center for Peace and Conflict Studies, told ANN. China has confirmed 483 delta cases since July 21 in 15 of its 31 provinces and autonomous regions, The New York Times reported.

"We are facing a huge humanitarian crisis, and it is really critical that we start to have a very pragmatic but coordinated approach to this," Leslie said. "All of us have received calls from people in Myanmar saying goodbye."

"ASEAN cannot be expected to do it alone," Kobsak said. "This [needs] a medical and health intervention on a global scale. We have to ask the U.N. secretary-general, where is he? He should be inside Myanmar now coordinating and leading the entire U.N. system response. The U.N. is already there, it has the infrastructure -- the vaccines can go in to be distributed."