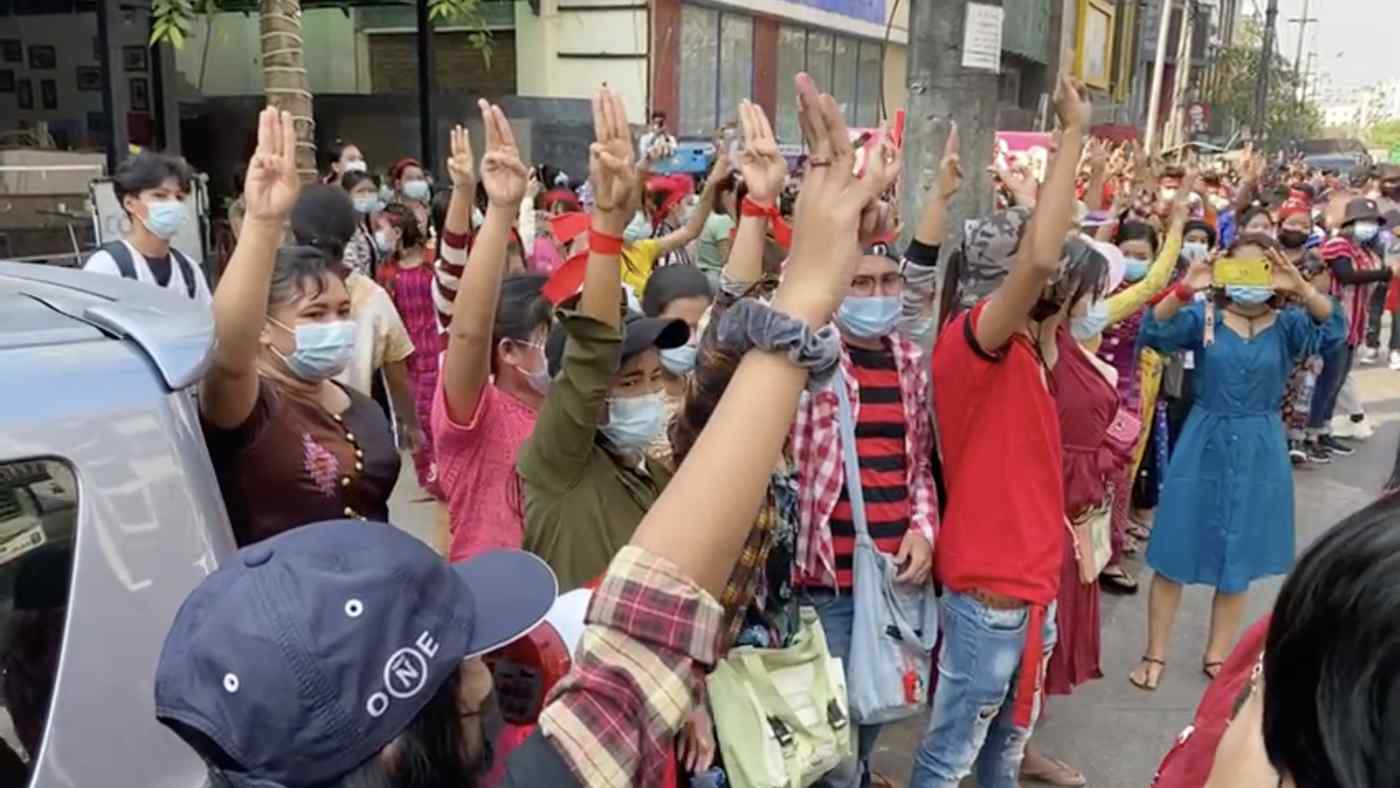 The Japanese Embassy notified nationals residing in Myanmar that the new blockages would begin at 9 a.m. on Feb. 6.

The Ministry of Transport and Communications had already issued directives on Feb. 3 to mobile operators, international gateways and internet service providers to block social media platform Facebook. Twitter and Instagram were also shut down on Friday.

London-based independent internet service watchdog NetBlocks claimed that the country is experiencing a near-total internet shutdown. Internet connectivity was at 16% of ordinary levels as of 2 p.m. Saturday local time, it said. Connectivity had gone slightly below 50% when the military jammed lines of communication on Monday to stage a coup.

Over 1,000 demonstrators peacefully marched in the commercial district of Hledan in Yangon to protest against the coup. Lines of police officers stood by and faced off against the crowd, according to local reports.

The British Embassy in Myanmar expressed concern over how the shutdown may potentially be used against the people of Myanmar. "The U.K. has been clear that the state of emergency must not be used as a smokescreen for a crackdown on rights and freedoms," the mission tweeted. "We urge the military to refrain from disruption of communication or freedom of expression."

The U.S. Embassy echoed that. "We repeat our calls for the military to relinquish power, restore the democratically elected government, release those detained, lift all telecommunications restrictions, and refrain from violence," it tweeted.

Domestic civil society organizations issued a statement Saturday urging the targeted companies to disregard the new government directive on the grounds of it being illegitimate.

"We would like to remind all operators that under the UN's guiding principles of business and human rights, you have a duty to not enable or contribute to potential human rights violations," the statement said. "Shutting down an important means for the nation to communicate with one another and bear witness is part of the military's strategy to illegally retain power, and would thereby allow for potential human rights violations to take place with impunity."

It also said that the blocking would add to existing COVID-related and security risks.

The junta is rumored to have enlisted technical support from China, but the tactics are homegrown. National communication blackouts were used occasionally by the State Law and Order Restoration Council in its early years after seizing power in September 1988. In the pre-internet age, Myanmar's telecommunications structure was undeveloped and unreliable -- and much more easily monitored by military intelligence.