SINGAPORE -- The Association of Southeast Asian Nations faces intensifying pressure to address the crisis within its member Myanmar, as worsening bloodshed tests the relevance of the 10-country bloc.

Calls for a special emergency ASEAN summit have so far proved fruitless. Meanwhile, Saturday brought the worst bloodshed since the Feb. 1 military coup, with well over 100 killed including children.

ASEAN over the years has successfully promoted Southeast Asia as an emerging economic force. But experts are beginning to warn that a failure to bring about a peaceful outcome in Myanmar could affect the association's ability to shape the region's future.

Prominent members Indonesia, Malaysia and Singapore have been pulling diplomatic strings while treading carefully around ASEAN's principle of noninterference in individual nations' affairs. On Monday, Indonesian Foreign Minister Retno Marsudi met her Japanese counterpart Toshimitsu Motegi in Tokyo, where they had an "in-depth" exchange of views about Myanmar and agreed to work closely together.

Marsudi explained how ASEAN members including Myanmar communicate among themselves, while Motegi welcomed ASEAN's efforts to improve the situation, according to the Japanese Foreign Ministry.

Marsudi's visit to Japan -- a major investor in Myanmar -- comes as Singaporean Foreign Minister Vivian Balakrishnan heads to China on Tuesday and Wednesday. He already made the regional rounds last week: He visited Brunei, this year's ASEAN chair, along with Malaysia and Indonesia, and discussed the crisis along with the possibility of a special summit.

"I must confess to you that I am pessimistic," Balakrishnan said of Myanmar while speaking to reporters in Jakarta last Friday. But while he cautioned against interfering in members' domestic politics, he went on to argue: "It is essential for ASEAN's credibility, centrality and relevance to have a view, have a position and to be able to offer some constructive assistance to Myanmar."

At the same time, he added, "Do not expect quick solutions."

Sharon Seah, coordinator of the ASEAN Studies Centre at the ISEAS-Yusof Ishak Institute, a Singaporean think tank, told Nikkei Asia that it appears difficult to obtain a consensus from all 10 member states on holding a summit.

"One way is to employ an ASEAN-minus-X formula," she suggested. She noted that during the Philippine People Power Revolution in 1986, foreign ministers from Brunei, Indonesia, Malaysia, Singapore and Thailand went ahead without the Philippines and issued an ASEAN joint statement expressing concern and urging restraint.

On March 2, ASEAN did hold an informal foreign ministers meeting -- the first major international dialogue involving the Myanmar junta. In the chairman's statement, the ministers called for "all sides to exercise utmost restraint" and "expressed ASEAN's readiness to assist Myanmar."

But the violence in Myanmar has only increased, especially on Saturday, when the junta marked Armed Forces Day with a military parade and at least 141 citizens were killed across the country, according to media reports. As of Monday, 510 civilians had been confirmed killed since Feb. 1, according to activist group the Assistance Association for Political Prisoners. Pleas for an international response are growing louder. The United Nations' special rapporteur on human rights in Myanmar, Tom Andrews, last Thursday called on U.N. member states including ASEAN countries to hold an emergency summit of all stakeholders. This would include the ousted elected parliamentarians who have set up a Myanmar government in exile, the Committee Representing Pyidaungsu Hluttaw (CRPH).

"Conditions in Myanmar are deteriorating," Andrews said in a statement, "but they will likely get much worse without an immediate, robust, international response in support of those under siege."

Separately, on Sunday, two senior U.N. officials in a joint statement called for ASEAN and the wider international community to "act promptly to uphold the responsibility to protect the people of Myanmar from atrocity crimes."

ASEAN was formed in 1967 by five initial countries -- Indonesia, Malaysia, the Philippines, Singapore and Thailand. Myanmar joined in 1997, when it was still under military rule before democratization in the early 2010s. The remaining four members are Brunei, Cambodia, Laos and Vietnam.

The grouping of relatively small economies attracted investment from overseas and became one of the world's fastest-growing regions. It has also played central roles in regional frameworks such as the ASEAN Regional Forum, a rare international dialogue in which North Korea participates, and the Regional Economic Comprehensive Partnership trade pact, which the bloc's members concluded last year with China, Japan, South Korea, Australia and New Zealand.

The Myanmar crisis, however, threatens to undermine ASEAN on the world stage.

"Failure to resolve the current Myanmar crisis will pose a long-term existential threat to ASEAN by weakening the organization's internal unity and decreasing its relevance and centrality in shaping regional affairs and order," Yongwook Ryu, assistant professor at the National University of Singapore's Lee Kuan Yew School of Public Policy, and co-authors pointed out in a recent paper.

"In addition, it will expose internal fissures within ASEAN, which external powers can exploit for intervention in the region," they added. 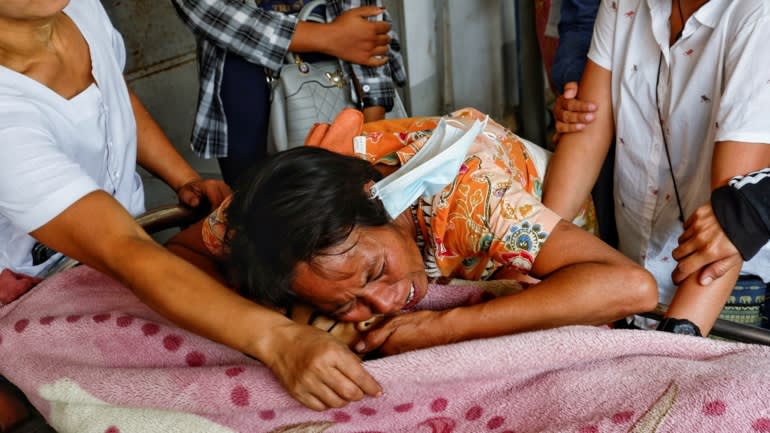 Family members cry over the body of a teenage boy killed by security forces in front of his home in Mandalay.   © Reuters

Seah at the ISEAS-Yusof Ishak Institute said ASEAN has no choice but to continue to engage with Myanmar, one way or another.

"ASEAN must employ all means to get their messages to the Tatmadaw," as Myanmar's military is known. She said that is of primary importance, but ASEAN also needs to work with other stakeholders including the U.N., the CRPH and Aung San Suu Kyi's National League for Democracy "to find a peaceful resolution."

She warned that the risk of high-intensity urban conflict in Myanmar is rising. "There is talk about arming the protesters," Seah said. "We want to avoid a situation of civil war erupting in Myanmar at all costs."