BANGKOK -- Protesters returned to the streets of Mandalay last Saturday, stamped on the flag of the Association of Southeast Asian Nations and then burned it.

A student leader in Myanmar's second-largest city said opponents of the junta, the State Administration Council, will carry on fighting for national freedom "without expecting any help from ASEAN or the U.N."

The slow pace of diplomatic engagement -- and the manner in which it is being conducted -- is fueling anger toward the international community.

Six weeks have passed since the 10-member ASEAN bloc held a special leaders summit in Jakarta, where five steps were agreed to bring the situation in Myanmar under control, including the cessation of violence and the appointment of an ASEAN emissary. Even Malaysian Foreign Minister Hishammuddin Hussein has tweeted about "painfully slow" developments on the consensus.

On May 20, the general admitted to Hong Kong's Phoenix Television that he had underestimated the public backlash. "I have to say I didn't think it would be that much," he said with no hint of a climbdown.

The region continues to reach out.

Last Friday, two Bruneian diplomats called on Min Aung Hlaing in Naypyitaw while on their way to Chongqing for this week's China-ASEAN meeting, hosted by Wang Yi -- the Chinese foreign minister who first offered good offices for mediation soon after Myanmar's coup.

The next day, China's ambassador to Myanmar also visited the general. "Ambassador Chen Hai stressed that the Chinese side has always cherished and attached great importance to the traditional friendship with Myanmar," the embassy posted on Facebook. The statement expressed hope for restoring "peace and stability," backed the ASEAN consensus and vowed that "China will continue to play a constructive role in this regard."

Min Aung Hlaing's Bruneian guests were ASEAN Secretary General Dato Lim Jock Hoi and Second Foreign Minister Dato Erywan Pehin Yusof. Brunei is this year's ASEAN chair, and there has been concern within the bloc over the country's lack of experience and openness in handling the Myanmar crisis. The visitors' main purpose was to present Min Aung Hlaing with "the nominations proposed by ASEAN member states for the special envoy of the ASEAN chair to Myanmar."

They also met Thein Soe, chairman of the junta's new election commission. Min Aung Hlaing has promised fresh elections once stability has been restored -- an enormous and possibly insurmountable caveat. 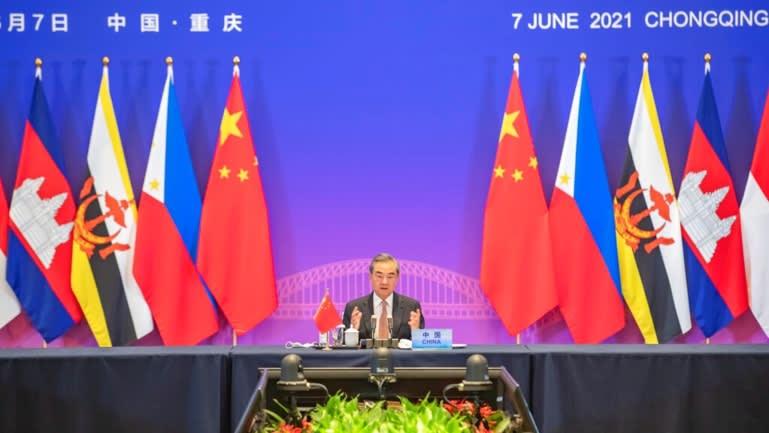 The optics offended some observers. "ASEAN has failed to recognize the Myanmar peoples' desire by siding with the illegitimate and murderous military junta," said Khin Ohmar, the founder and chair of advocacy group Progressive Voice. "The decision of the ASEAN delegation to solely meet with the illegal junta provides legitimacy to the military junta and contributes to further perpetration of grave human rights violations in the country."

A veteran regional analyst told Nikkei Asia that "Brunei is very untransparent, so not even the foreign ministers know what it is doing -- that is part of the problem."

Jason Tower of the United States Institute of Peace observed: "Brunei doing this on the way to Chongqing makes it look very chaotic and last-minute." He said holding the Mekong-Lancang Cooperation meeting after the ASEAN meeting with Myanmar as joint chair "also looks like business as usual."

With pointed timing, Thailand's Foreign Ministry on Sunday released a statement that Foreign Minister Don Pramudwinai had scheduled bilateral meetings during the Mekong-Lancang Cooperation gathering with China's Wang as well as ASEAN counterparts.

Spokesperson Tanee Sangrat said Thailand wants to see "concrete implementation" of the five-point ASEAN plan, "especially the appointment of the ASEAN special envoy and the provision of humanitarian assistance to the Myanmar people." 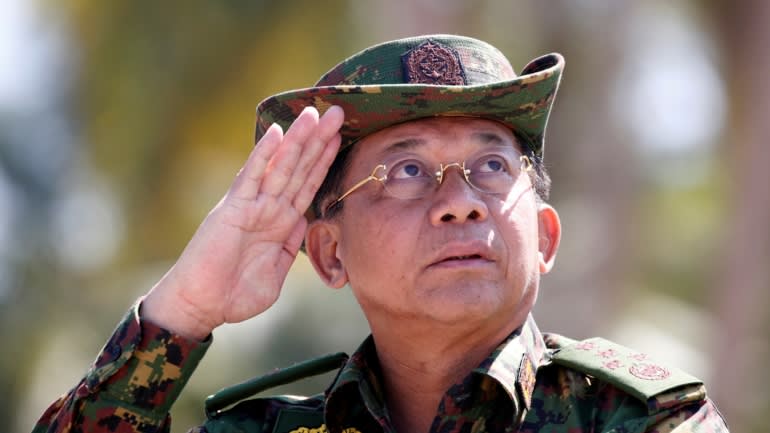 Myanmar's junta leader, Min Aung Hlaing: Some critics have questioned his involvement in diplomatic efforts to resolve the crisis.   © Reuters

The ASEAN list presented to Min Aung Hlaing has not been shared, but most of the names that have been mentioned as potential envoys are from Indonesia, Thailand and Singapore.

The highest-profile name from Singapore, 80-year-old former Prime Minister Goh Chok Tong, is convalescing from a recent illness. In 1994, Goh became the most senior ASEAN figure to visit Myanmar since serious bloodshed there in 1988. On paper, Singapore is Myanmar's largest foreign investor with over $24 billion committed, but it also acts as a funnel for funds from China.

One of Thailand's possible envoys is Virasakdi Futrakul, 69, who became deputy foreign minister in 2016. He resigned in 2019 and later became senate second vice president. Another is Thanasak Patimaprakorn, 67, who served as chief of defense forces from 2011 to 2014, and as foreign minister from 2014 to 2015. He was also a deputy prime minister until 2017, but there would likely be antipathy to such obvious military-military engagement.

Foreign ministry sources in Jakarta told Nikkei that any announcements on the ASEAN envoy to Myanmar will come through Brunei as chair. Among the names that have surfaced in Indonesia, however, are two former foreign ministers, Hassan Wirajuda, 72, and Marty Natalegawa, 58. Another is Dino Pattia Djalal, 55, who was ambassador in Washington from 2010 to 2013 and deputy foreign minister briefly in 2014. He now heads a think tank, the Foreign Policy Community of Indonesia.

One reason for appointing a team of envoys would be to diminish possible concerns about individual countries -- such as Indonesia having a Muslim agenda, Singapore looking after its business interests, or the Thai and Burmese militaries being too cozy. Singaporean Prime Minister Goh Chok Tong, right, is welcomed by Myanmar Senior Gen. Than Shwe in March 1994. At that time, Goh was the most senior figure in ASEAN to visit Myanmar following serious bloodshed in 1988. (Photograph by Dominic Faulder)

Apart from intra-ASEAN politics, other issues may be playing out inside the ministries. "Part of the problem is there is no real tradition in ASEAN of appointing envoys who are equal to or senior to sitting foreign ministers," one longtime diplomatic observer said. "They don't like it because it usurps their authority."

But he also came to ASEAN's defense: "There is so much expectation and criticism out there," he said. "Who else is taking a lead on this? Everyone is dumping on ASEAN but no one else is doing anything. It has become a bit of a punch bag, and I think that is bad. It relieves the pressure on the U.S., China, Japan and others, who are not doing anything at all really."

There was dismay in ASEAN in April that United Nations Secretary General Antonio Guterres, who is seeking reelection this year, needed prodding from Malaysia to ensure his special envoy on Myanmar, the Swiss diplomat Christine Schraner Burgener, reached the Jakarta summit.

She met Min Aung Hlaing on the sidelines but did not secure access to Naypyitaw. After visiting Tokyo in late May, she returned to Switzerland and is not expected back in the region until late July.

Meanwhile, potential envoys, particularly those already in retirement, may think twice before risking their legacies on what could well be a hopeless mission. Myanmar has been a poisoned chalice to many. Its exceptionally bad record on foreign relations predates another nationally catastrophic coup -- Gen. Ne Win's in 1962.

Simmering xenophobia has sometimes surfaced in bizarre ways. On Nov. 6, 2005, the capital was moved at an astrologically auspicious moment to Naypyitaw from Yangon -- without the diplomatic corps being given advance warning. In 2020, foreign embassies were still failing to meet the relocation deadline because of the lack of amenities -- not least international schools -- and infrastructure in the new capital.

Generations of emissaries and rapporteurs have been rebuffed. When Japanese diplomat Sadako Ogata visited in 1990 as an independent expert to the U.N. examining the human rights situation in Myanmar, her movements were so restricted that some observers asked if her own human rights were being violated.

Future U.S. Secretary of State Madeleine Albright visited in 1995 when she was President Bill Clinton's ambassador to the U.N. She was able to meet the newly released Aung San Suu Kyi, but was snubbed by officials who referred to her privately as "Mad Eleine." Albright was invited back by Suu Kyi -- again recently released from house arrest -- in 2011, but was twice refused a visa before finally making a five-day visit in 2013.

There are a number of ASEAN precedents for offering good offices in the region, including the entire Cambodian peace process dating from the late 1980s. Under the energetic leadership of ASEAN Secretary General Surin Pitsuwan from Thailand, ASEAN was also instrumental in the provision of humanitarian aid to surviving victims of Cyclone Nargis, which struck in April 2008 killing some 140,000 Burmese.

The State Peace and Development Council, Myanmar's junta at the time, was more preoccupied with the unwelcome offshore presence of U.S. naval vessels willing to send humanitarian aid ashore, and forcing through a dubious national referendum on the long-delayed constitution.

Retired Thai ambassador Kobsak Chutikul told Nikkei that an ASEAN envoy -- or team of envoys -- to Myanmar might yet play a role.

"Even though the prospects are slim that the Burmese generals would bend to mediation efforts," Kobsak said, "an ASEAN envoy could provide an exit ramp if they came to the conclusion that the ongoing situation is untenable."