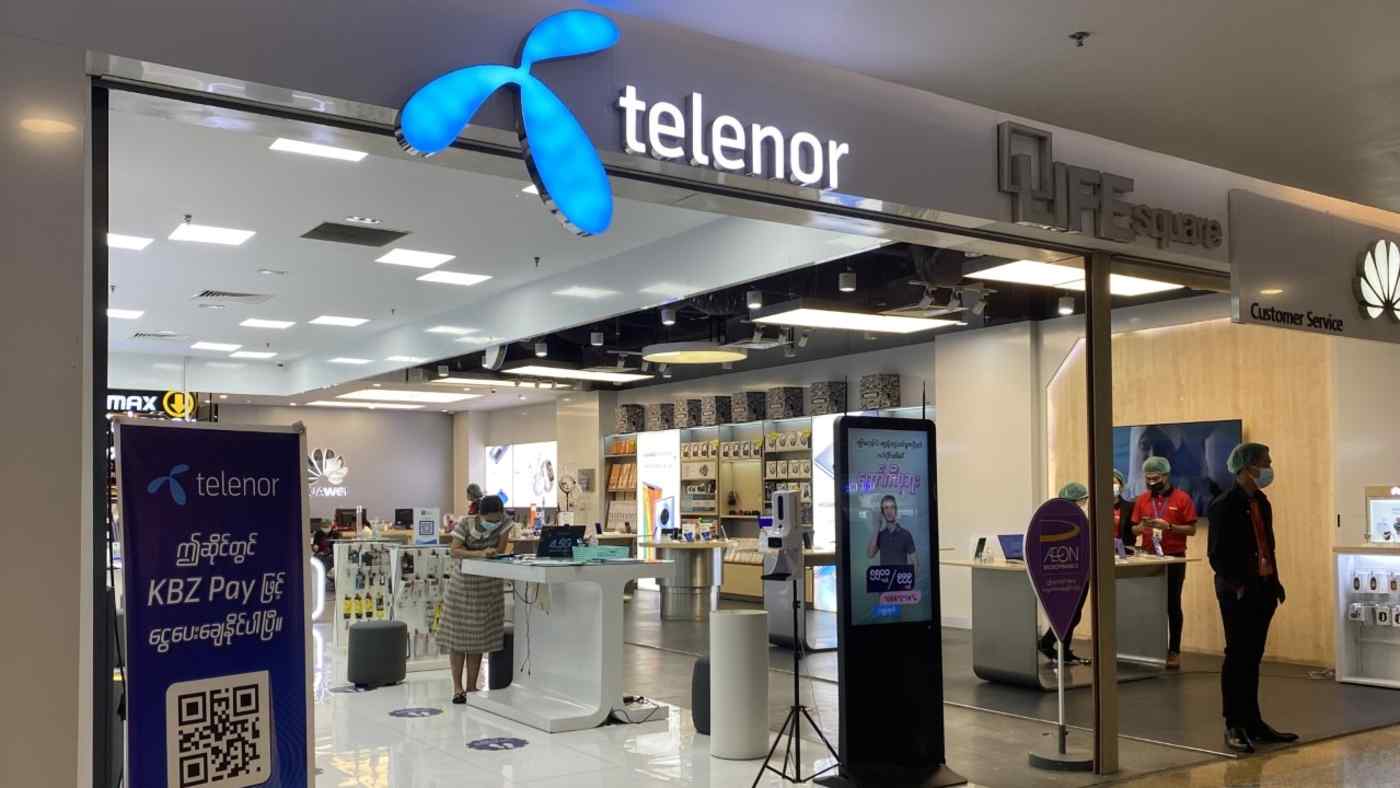 BANGKOK/YANGON -- Norwegian telecoms operator Telenor has announced on Thursday the sale of its mobile operations in Myanmar to M1 Group, a Lebanese company, for $105 million.

The move was foreshadowed by Telenor's decision to write off its Myanmar unit in May, when it booked a loss of 6.5 billion Norwegian crowns ($752 million), amid increasingly severe restrictions on businesses following the military takeover Feb. 1.

The prominent Norwegian company said "the transaction corresponds to an implied enterprise value of approximately $600 million."

Analysts said the company's withdrawal is a sign of the unravelling of the economic legacy of President Thein Sein, a relatively progressive former general who entered office in 2011 and liberalized telecommunications in 2013.

"Further deterioration of the situation and recent developments in Myanmar form the basis for the decision to divest the company," Telenor said in its statement.

Since the February coup, nearly 900 civilians have been killed and more than 6,500 arrested by the military regime, the State Administration Council. The SAC has clamped down on internet access and coerced telecom companies into cutting services and handing over internet and mobile user data.

Some restrictions were eased in late April, but in mid-June pressure was reapplied with senior foreign telecom executives told to seek official permission before leaving the country.

An executive from another company that considered bidding for the Telenor business said the process was "extremely rushed" and allowed almost no time for due diligence. "They will no doubt get some flak in Norway," he told Nikkei Asia.

Other sources familiar with the deal said Telenor offered extremely attractive financial terms including, as mentioned in its latest statement, payment of $55 million of the selling price deferred over five years.

Telenor's exit indicates how difficult the business environment has become for companies wishing to operate responsibly. When it wrote off the business in May, Telenor openly cited security and human rights concerns.

Telenor started its operation in Myanmar in 2014. Since the coup, it has consistently spoken out against internet blocks and cyberspace restrictions, including recent confined access to SAC-approved apps and websites.

According to a pre-coup industry estimate based on mobile voice traffic, MPT and Telenor each had about 30% of the market, followed by Mytel with 25% and Ooredoo with 15%.

Industry observers said M1 Group's move "made sense" because of the low price it paid and its existing share in Irrawaddy Green Towers, which operates telecom towers.

"Of course the deal carries risks," said a Myanmar-based telecom executive, who noted the difficult nature of the people attempting to run the country at present. Rival Mytel is meanwhile a joint venture by the military with Vietnam's Viettel -- another military business operation.

"It may be quite a dirty business going forward competing with these state players, but for someone who can navigate the increasingly tricky landscape, there is definitely money to be made -- not as much as before," the executive said.

"The license itself would have cost $500 million and another $500 million to build the network," the executive said of Telenor's investment, which he estimated previously yielded annual profits of a few hundred million dollars. He said that even with the current restrictions, profits will continue to be significant because "businesses and many others still need the internet."

Another executive, who declined to be named, believed another reason for Telenor's speedy departure was increased pressure to apply surveillance. "It was the last straw," he said, noting the serious reputational risk. "It's something no Western company would want to do."

The military's many critics have expressed alarm at reported plans for communication intercepts and surveillance.

"While Telenor has made moves to act with transparency, and made limited attempts to protect user data, we cannot expect the same from M1 Group," Yadanar Maung, spokesperson for activist group Justice for Myanmar, told Nikkei.

M1 Group was co-founded by Najib Mikati, a former Lebanese prime minister. "The Mikati family have a track record of telecommunications investments in authoritarian contexts, including Syria and Iran, which is ominous for their takeover of Telenor," said Yadanar Maung. "Telenor is failing in its human rights responsibilities through this rapid-fire sale to M1 Group."

An M1 Group subsidiary is the main shareholder in MTN, a leading mobile operator listed on the Johannesburg Stock Exchange, that has a presence in 24 mostly African countries. In 2013, M1, MTN and Amara, a local Burmese company, formed an unsuccessful consortium to bid for a license when Thein Sein opened the market.

"Myanmar's military junta is now making it impossible for any company to continue operating in the country without violating human rights," said Phil Robertson, deputy director for Asia of U.S.-based Human Rights Watch. "Telenor was put between a rock and a hard place by the junta's demands that it switch on phone intercept technology."

"It's not at all surprising that Telenor decided to exit," he said. "The sad part is Telenor will likely be replaced by a company that is less principled in standing up to the junta's rights-abusing demands, and the Burmese people will be worse off because of it."