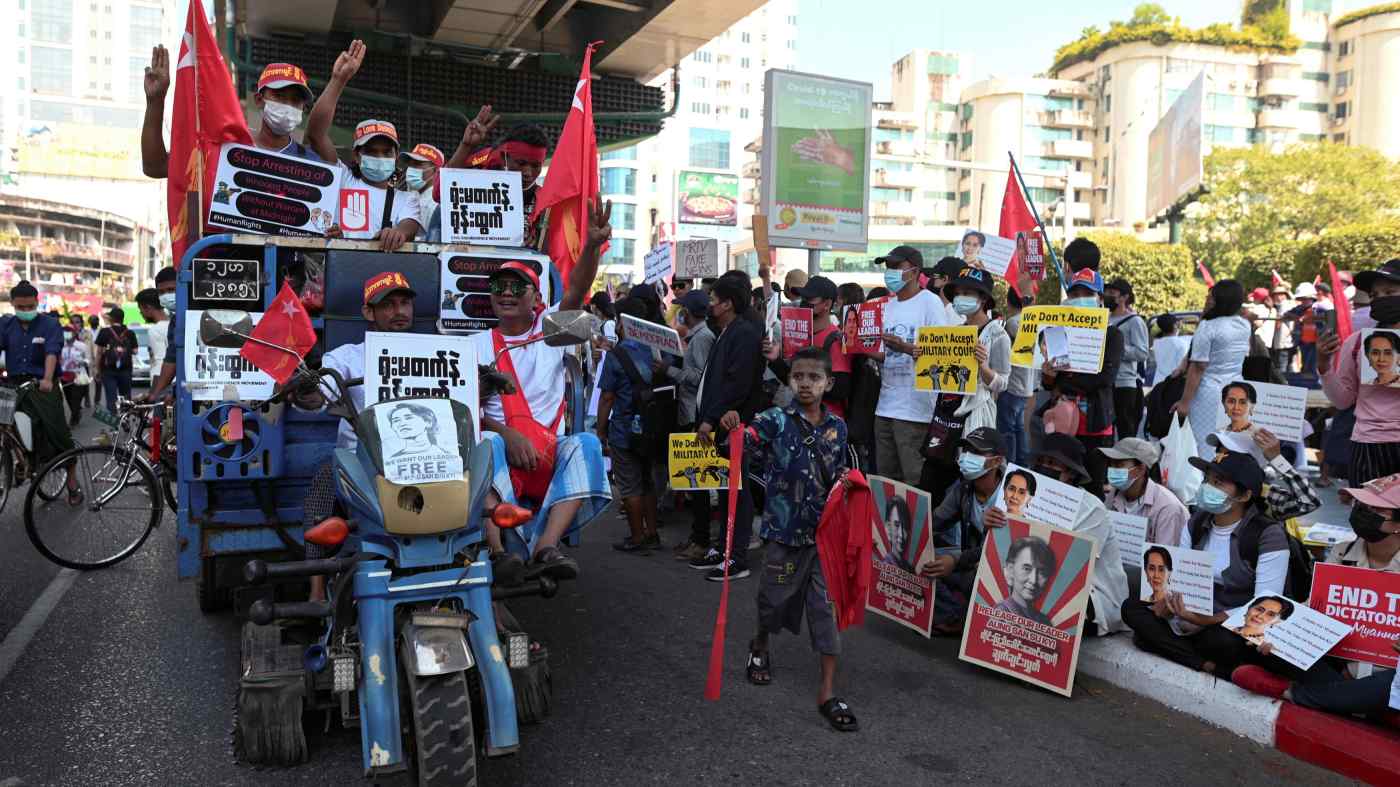 Tens of thousands of protesters took to the streets in Myanmar's major cities for a ninth day of anti-coup demonstrations on Sunday, after a fearful night as residents formed patrols and the army rolled back laws protecting freedoms.

Engineering students marched through downtown Yangon, the biggest city, wearing white and carrying placards demanding the release of former leader Aung San Suu Kyi, who has been in detention since Myanmar's military overthrew her elected government on Feb. 1.

Part of the biggest street protests in more than a decade, a fleet of highway buses rolled slowly through the city, honking their horns in protest.

A convoy on motorbikes and in cars drove through the capital Naypyitaw. In the southeastern coastal town of Dawei, a band played drums in shadows cast by awnings as crowds marched under the hot sun. In Waimaw, in the far northern Kachin state on the banks of the Irrawaddy River, crowds carried flags and sang revolutionary songs.

Many of the protesters nationwide held up images of Suu Kyi's face.

Her detention, on charges of importing walkie-talkies, is due to expire on Monday. Her lawyer, Khin Maung Zaw, could not be reached for comment on what was set to happen. Demonstrators hold signs during a protest against the military coup and demanding the release of elected leader Aung San Suu Kyi, in Yangon, Myanmar, Feb. 13.   © Reuters

More than 384 people have been detained since the coup, the monitoring group Assistance Association for Political Prisoners said, in a wave of mostly nightly arrests.

"While the international community is condemning the coup, Min Aung Hlaing is using every tool he has to instigate fears and instabilities," activist Wai Hnin Pwint Thon from the UK-based rights group Burma Campaign UK said on Twitter, referring to the army chief.

Many protesters in Yangon carried signs calling to authorities to "stop kidnapping people at night".

Residents banded together late on Saturday to patrol streets in Yangon and the country's second-largest city Mandalay, fearing arrest raids as well as common crime after the junta ordered the release of thousands of prisoners.

In different neighbourhoods, groups of mostly young men banged on pots and pans to sound the alarm as they chased down what they believed to be suspicious characters.

Worries about criminal activity have soared since Friday, when the junta announced it would free 23,000 prisoners, saying the move was consistent with "establishing a new democratic state with peace, development and discipline" and would "please the public".

Unverified pictures on social media have fuelled rumours that criminals are trying to stir unrest by setting fires or poisoning water supplies.

Tin Myint, a resident of Sanchaung township in Yangon, was among the crowds who detained a group of four people suspected of carrying out an attack in the neighbourhood.

"We think the military intends to cause violence with these criminals by infiltrating them into peaceful protests," he said.

He cited pro-democracy demonstrations in 1988, when the military was widely accused of releasing criminals into the population to stage attacks, later citing the unrest as a justification for extending their own power.

Three people in different parts of Yangon said they had seen drones hovering above the crowds. "It was flying up and down and filming the crowd chasing after thieves," said 30-year-old Htet, who asked to be identified by only one name.

The government and army could not be reached for comment.

Also late on Saturday, the army reinstated a law requiring people to report overnight visitors to their homes, allowed security forces to detain suspects and search private property without court approval, and ordered the arrest of well-known backers of mass protests.

The coup has been denounced by Western countries, with the United States announcing some sanctions on the ruling generals and other countries also considering measures.