Vendors and shoppers carry on at a market on Feb. 2, a day after the army seized power, in Yangon, Myanmar.
GWEN ROBINSON, Nikkei Asia editor-at-largeApril 22, 2021 15:59 JST | Myanmar
CopyCopied

BANGKOK -- Up to 3.4 million additional people in Myanmar will face hunger in the coming three to six months on top of nearly 3 million already suffering food insecurity amid the country's deepening economic and political turmoil since the Feb. 1 coup, the U.N. World Food Programme warned on Wednesday.

In its latest assessment of the situation in the wake of the military takeover, the agency gave a far bleaker view than a month earlier, when it warned that an additional 1.8 million people could face hunger as a result of the coup.

On Wednesday, WFP said that further increases in food prices, joblessness and ongoing concerns about COVID-19 are accelerating economic deterioration and fueling a humanitarian crisis. Myanmar's economy in 2020 was already severely impacted by the pandemic, with a quarter of the country's population already poor and a further third vulnerable to poverty. To tackle the looming humanitarian crisis, the U.N. agency has called for an additional $106 million to build an emergency stockpile of food.

The agency warned that in coming months, the number of people it currently assists will nearly triple -- from 1.3 million to 3.3 million. "To prevent a large-scale humanitarian crisis unfolding in front of our eyes, we must step up," said Stephen Anderson, the program's Myanmar country director. "A concerted response is required now to alleviate immediate suffering, and to prevent an alarming deterioration in food security."

Since the coup, food and income shortages have become particularly urgent in urban areas, where vulnerable people are at the greatest risk from the economic decline and spiraling violence. The longer-term impact on food security will also add pressure on rural populations, the report warns.

According to the Assistance Association for Political Prisoners, which monitors deaths and detentions, more than 740 civilians have been killed and at least 4,360 detained since Feb. 1. The brutal takeover has drawn condemnation from governments and international bodies, including the U.N.

As fears grow of a refugee exodus into neighboring countries, including Thailand and India, leaders of the Association of Southeast Asian Nations on Saturday are expected to discuss possible regional responses during an emergency summit in Jakarta. The coup leader Gen. Min Aung Hlaing will attend, according to the junta, known as the State Administration Council.

In its latest assessment, WFP cites rising food and fuel prices, disruptions in trade, slumping economic growth, and internal displacement of ethnic minority groups alongside job and income losses. A nationwide civil disobedience movement has seen hundreds of thousands of civil servants and several million other workers boycott their jobs. 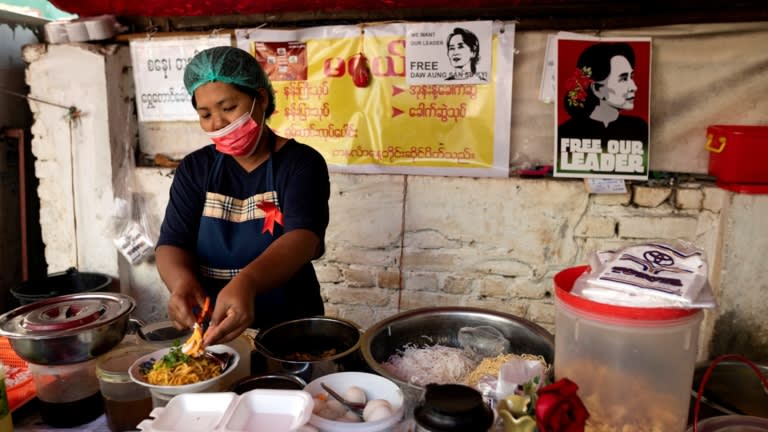 A woman cooks at a food stall in Yangon, Myanmar, on Feb. 16. Fitch Solutions predicts Myanmar's gross domestic product will contract by 20% this year.   © Reuters

A recent forecast by Fitch Solutions, an arm of the global credit rating group, indicated a contraction of 20% in Myanmar's gross domestic product for 2021, far exceeding the World Bank's earlier forecast of a 10% contraction cited by WFP. Private economists have warned that the damage could be even more severe as security forces intensify their crackdown on anti-coup protesters and step up their military campaign against ethnic armed groups in Myanmar's border areas.

"Most health care service providers as well as educational institutions are closed. Approximately 2,000 private banks are not operational with only a few branches open, at minimal capacity, creating a substantial backlog of international payments, withdrawals and interbank transfers," the report says. "With international money transfers disrupted, sending remittances to relatives inside Myanmar is becoming increasingly problematic for the more than 4 million Myanmar living abroad," WFP said in the report.

The U.N. agency estimates that up to 90% of national government activity has ceased. Many factories are closing. And the national business registry recorded only 190 new registrations in February, compared with 1,300 a year earlier.

Another factor affecting food security is the near paralysis of transport and freight systems amid a significant increase in logistics costs. Only 25% of regular Yangon-based transport services are operating, and a limited number of truckers remain employed, the agency said.

Food is not only more scarce but prices are rising, WFP said. The agency's latest market monitoring shows that since Feb. 1 market prices of rice have increased by 5% across all monitored markets, while cooking oil prices have gone up 18%. Even higher increases were registered in border states, including Rakhine, Kachin and Chin, it said. "Given the importance of rice and cooking oil in diets and the expenditure of poorest households on rice," the report says, "continued price increases will likely further impact household food security."