Work is underway on a new building in Sinuiju on the North Korean side of the Yalu River. Construction industry officials in Dandong have speculated that China is providing technical assistance for the project. (Photo by Daisuke Harashima)
DAISUKE HARASHIMA, Nikkei staff writerDecember 6, 2018 18:43 JST | China
CopyCopied

DANDONG, China -- Despite United Nations sanctions on North Korea remaining in place, trade at China's border with the country appears to be thriving again.

The number of trucks making their way across the Sino-Korean Friendship Bridge increased sharply in November, according to an executive of a housing materials supplier in the border city of Dandong.

Many carry plywood flooring, elevator components and other materials to construction projects in North Korea, while seafood heads in the other direction.

"These days, the bridge gets jammed with traffic, which is something we rarely saw after the sanctions resolution" in 2017, the executive said.

About 70% of China-North Korea trade passes through Dandong. In late November, construction work could be seen getting underway in Sinuiju on the other side of the Yalu River, which separates the two countries.

A large, cylinder-shaped building is taking shape close to the bridge, in an area that also hosts an amusement park. According to local rumors, it is a hotel that will target Chinese tourists.

About 10 km to the south lies the New Yalu River Bridge, which is expected to replace the older crossing as the main cross-border artery when it opens. Many structures that look like new apartment buildings can be seen close to it on the Korean side. Lines of trucks roll over the Sino-Korean Friendship Bridge. (Photo by Akira Kodaka)

The North Korean leader has shifted his focus to economic policy amid improving relations with China and South Korea.

Sinuiju will potentially be crucial to driving economic growth through trade with China. This past summer, Kim inspected cosmetics and textile plants in the city, and many believe Pyongyang has stepped up the development of nearby areas.

The sanctions imposed on the Kim regime over its nuclear and missile programs make it difficult for the country to rebuild its economy on its own.

China, which accounts for 90% of North Korea's total trade in value terms, is backing efforts to revitalize the city.

Black North Korean clams are easily distinguished from the yellow Chinese variety, claimed a middle-aged woman at the Donggang Yellow Sea market as she hooked some out of a net and sorted them by size.

The Chinese authorities toughened controls on imports of clams, crabs and other seafood from North Korea immediately after the sanctions were imposed, but several wholesalers said smuggling in the Yellow Sea had picked up again this past spring.

North Korean seafood at the market, they claimed, was simply being packaged as if it came from China. The clams served at a restaurant in the city were all black.

The sanctions also restrict the acceptance of North Korean workers.

At a garment factory in suburban Dandong, however, there were a number of female laborers from across the border, and what appeared to be a North Korean merchant was seen staying at a luxury hotel in the area, neither of which would have been common sights just after the sanctions were imposed. These people most likely enter China on short-stay permits, rather than working visas. 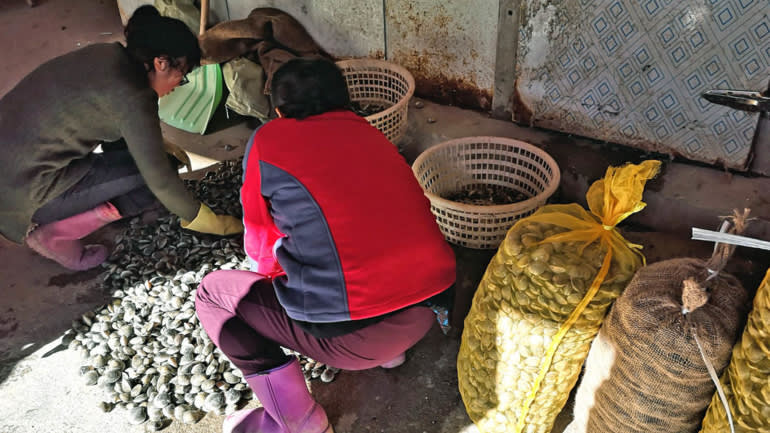 Women sort clams that “came from North Korea” at a seafood market in Dandong. (Photo by Daisuke Harashima)

"It is hard to imagine they have the technology to construct a round building," said a senior official of a construction materials company in Dandong, speaking about the supposed new hotel on the other side. What is less hard to imagine, he assumed, is where the technical support was coming from.

Locals claim that a Chinese inspection team had gone over to look at the construction of roads linking the new bridge with the nearby town.

When the U.N. Security Council approved the sanctions, China worked with the international community, cracked down on smuggling and imposed tighter controls on visas for North Korean workers.

Kim has visited China three times since March, and observers believe Chinese President Xi Jinping will visit North Korea in 2019. As bilateral ties improve, controls around the border have loosened, drawing criticism from the U.S. and other countries.

Based on official Chinese statistics, trade with North Korea in value terms decreased 56% on the year between January and October. But the effects of the sanctions appear to have all but vanished in this border city.