The website, 38 North, reported that infrastructure improvements at the Yongbyon Nuclear Scientific Research Center are being made at a rapid pace. The site based its report on commercial satellite imagery from last week. It said construction continues on support facilities throughout operational areas of Yongbyon, 100km north of Pyongyang. At the Experimental Light Water Reactor, a new engineering office building appears externally complete, 38 North said.

"Continued work at the Yongbyon facility should not be seen as having any relationship to North Korea's pledge to denuclearize," said 38 North. "The North's nuclear cadre can be expected to proceed with business as usual until specific orders are issued from Pyongyang."

Spokesperson at South Korea's Unification Ministry said, "We are watching carefully on developments from North Korea. But, it is not appropriate to comment on North Korea's nuclear issue in detail."

The report came hours before U.S. Secretary of Defense James Mattis was to meet his South Korean counterpart, Song Young-moo, in Seoul on Thursday afternoon. Mattis was in Beijing earlier in the week and will head to Japan next.

He and Song are expected to discuss how to follow through after announcing the suspension of joint military drills earlier this month. 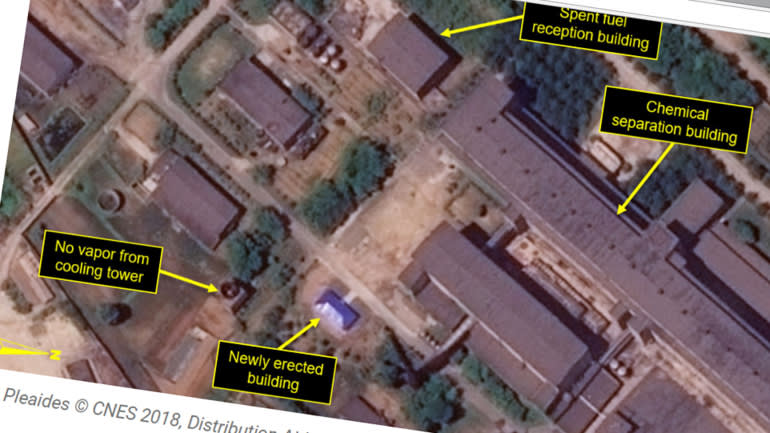 The U.S. and South Korea canceled their annual Freedom Guardian exercise, scheduled for August, after U.S. President Donald Trump in Singapore on June 12 said "war games" are "provocative" and costly. He made the statement during a wide-ranging press conference hours after signing the statement with Kim that pointed the way toward denuclearizing the Korean Peninsula.

The announcement raised security concerns in Seoul and Tokyo, which rely on U.S. forces for security and on the U.S.'s nuclear umbrella for deterrence.

The website also said modifications to the 5MWe reactor's secondary cooling loop, which began in March, appear externally complete, though no visible steam is being vented from a generator building, unlike in February, indicating that the reactor is not operating.