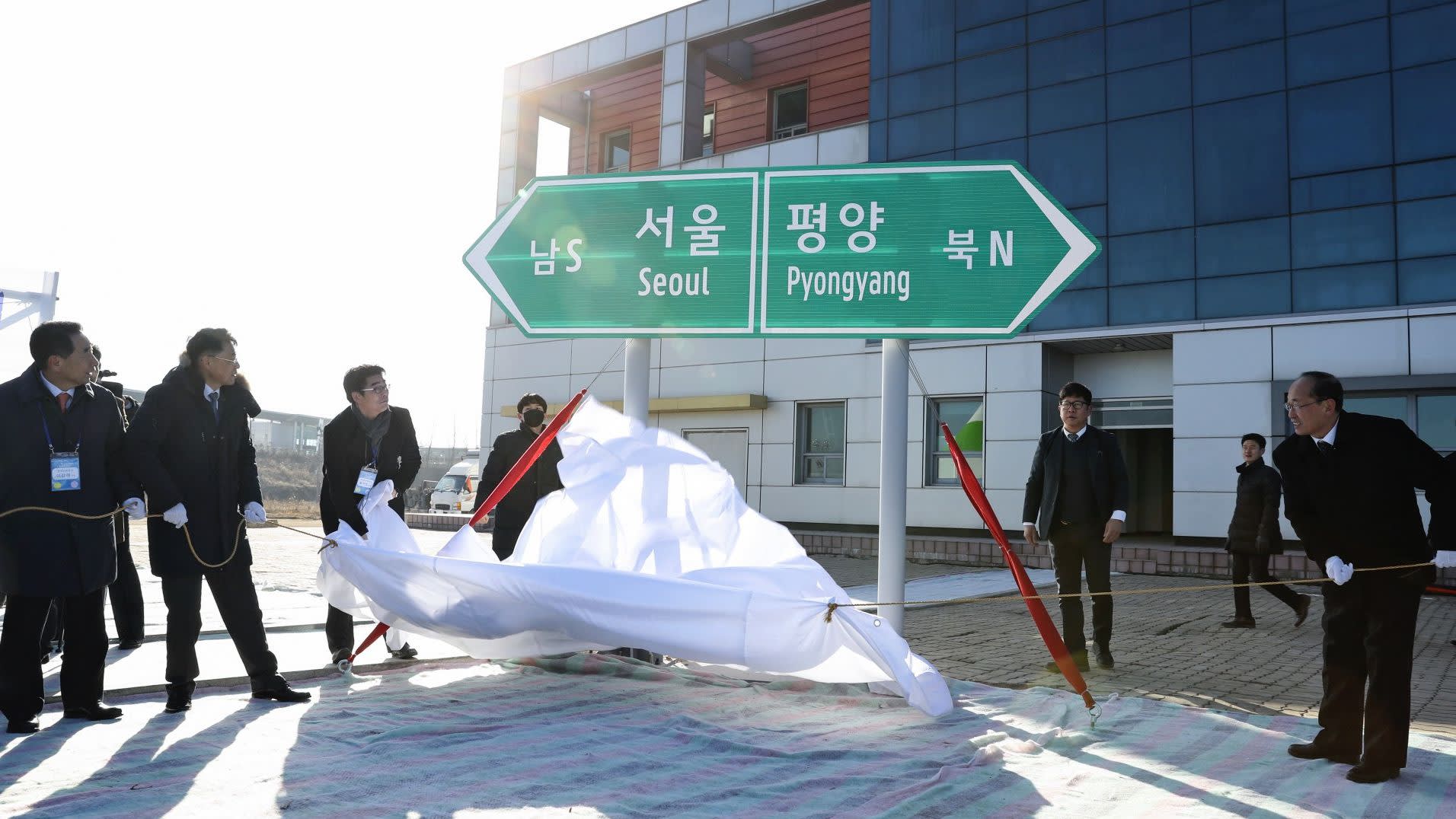 SEOUL -- The ground was broken Wednesday on a project to connect North and South Korea's rail and road systems, but any progress will be dependent on the loosening of the sanctions that are limiting the scope of economic collaboration on the divided peninsula.

About 200 officials from both sides attended the groundbreaking event at Panmum Station in Kaesong, a border city in the North. A functioning inter-Korean rail system is regarded as key to economic cooperation.

"Through rail, companies can boost their competitive advantage in the international market," Kim Hyun-mee, South Korea's transport minister, said at the event.

North Korea's Kim Jong Un regime depends on the financial support of neighboring countries to develop infrastructure. But the U.S. has waged a "maximum pressure" campaign against the state based on international sanctions, which are officially endorsed by South Korea.

"You cannot realize the hope of our people for unification if you are mindful of others and waver," said North Korean Vice Railroad Minister Kim Yun Hyok, taking a shot at the South's awkward position.

In September, the two Koreas opened a full-time liaison office. The two governments held more than 285 discussions through mid-December regarding inter-Korean cooperation, including the rail project, according to South Korea's Ministry of Unification. But those talks have failed to yield any substantive collaboration so far.

For the rail link, one obstacle is the price tag. A think tank linked to the South Korean government estimates that a network on par with the Korea Train Express, the South's high-speed system, would cost 38 trillion won ($33.7 billion). Adding the cost of building electricity infrastructure to power the trains, along with administration and maintenance, pushes the outlays even higher.

North Korean rail lines are aged and dilapidated to the point that some trains are forced to crawl at no more than 20 km per hour.

The biggest limiting factor is the economic sanctions imposed on the North by the U.N. Security Council. The U.S., which pushed for the sanctions, refuses to lift them until Pyongyang demonstrates that it has dismantled its nuclear weapons program. Wednesday's groundbreaking was made possible by the granting of a special exception for materials transported to the North that day.

To drum up international support for a trans-Korean rail system, South Korean President Moon Jae-in has called for an East Asian Railway Community, which would include the North as well as neighboring countries. Attending the groundbreaking ceremony were senior officials from China, Russia and Mongolia.

Conspicuously absent were contingents from the U.S. and Japan, another proponent of the maximum pressure campaign.

The Trump administration has signaled disquiet about Seoul's eagerness for inter-Korean cooperation. In light of those concerns, South Korea and the U.S. agreed in November to establish a joint working group to coordinating their approach to Pyongyang.

During a Friday meeting with the South Koreans, Stephen Biegun, the U.S. special representative for North Korea, agreed to help them send flu medication to the North as a humanitarian measure.

The two Koreas signed a broad-ranging military agreement in September to ratchet down tensions. U.S. Secretary of State Mike Pompeo criticized the South for not fully coordinating the pact with the White House.

Despite American objections, military exercises and reconnaissance flights along the military demarcation line have been prohibited across the board since Nov. 1. Surveillance stations in the Demilitarized Zone have been dismantled as well.

The Koreas discussed disarming the Joint Security Area in the Panmunjom truce village at the border to facilitate crossings there. But North Korea has objected to a joint administrative arrangement that would include the U.S., according to South Korean media reports.