TOKYO/SEOUL -- Eager to bring closure to decades-old abductions of its citizens by North Korea, the Japanese government is seeking ways to talk directly with Pyongyang.

One trump card that Tokyo is trying to play is economic aid, which it promised at a landmark summit back in 2002 to give North Korea once diplomatic relations were normalized.

The question is how much.

A proposal being weighed at the Ministry of Foreign Affairs puts the figure at $10 billion. For Prime Minister Shinzo Abe, who calls resolving the abduction issue a "top priority," the calculations are more than monetary.

The issue of Japanese aid to Pyongyang, and on what terms it would be granted, has gained renewed prominence since U.S. President Donald Trump's June summit with North Korean leader Kim Jong Un, which opened up the prospect of a formal end to the Korean War and normal diplomatic relations between their two countries.

Asked before the summit whether his administration was considering aid to North Korea, Trump said, "I think that Japan will help out." He also mentioned China and South Korea as donors.

At the 2002 summit between then-Japanese Prime Minister Junichiro Koizumi and North Korea's Kim Jong Il, Japan promised North Korea it would provide economic assistance after relations were normalized. That has not happened. But Abe has expressed a willingness to meet with Kim Jong Il's son Kim Jong Un if the conditions are right, and has said Japanese aid "will be absolutely necessary for North Korea to develop toward a bright future." How Japanese voters would react to a massive payout for the Kim regime remains unclear. The $10 billion proposal is based on the economic aid that Japan provided South Korea as part of a 1965 deal to normalize relations: $300 million in grants and $200 million in long-term loans. "This was about 1.5 times South Korea's national budget at the time," said an official at the ministry.

North Korea does not disclose the size of its budget. But the South's Ministry of Unification estimates the 2017 figure at $7.29 billion. Multiplying this by 1.5 yields $10.93 billion.

The problem for Japan is that economic assistance is perhaps one of the only cards it holds.

From the Japanese perspective, $500 million in 1965 is equivalent to about $6.7 billion today, taking into account inflation and changes in the dollar-yen exchange rate. Reckoned this way, $10 billion would be a much more generous payout than the Japanese aid to South Korea in the 1965 deal.

Some South Korean experts believe that Pyongyang would now demand $20 billion or more. Based on inflation and other factors, $10 billion from the time of the 2002 summit would be roughly $20 billion today, Samsung Securities said in a June report.

Japan was Asia's largest economy back when it signed the Pyongyang Declaration in 2002. But it has since lost that title to China. "North Korea can expect massive assistance from China," said a source connected with the General Association of Korean Residents in Japan -- the North's de facto embassy. "$10 billion from Japan would be chump change."

Tokyo's debate on dollar diplomacy to North Korea is not new. Back in the 1990s, a Japanese delegation led by prominent politicians Shin Kanemaru and Makoto Tanabe met with Kim Il Sung, North Korea's founder and then-leader. The two men were rumored to have offered $8 billion in a closed-door meeting, though no official records remain.

Thae Yong Ho, a former North Korean diplomat who defected to the South, wrote in his memoir that Pyongyang expected more. Kang Sok Ju, a key player behind the 2002 summit, predicted afterward the North would receive at least $10 billion and be able to rebuild roads and railways, according to Thae.

The 1965 deal's aid to South Korea was framed as economic assistance rather than wartime reparations, and Tokyo would do likewise with any money it provides the North.

The Pyongyang Declaration, issued after the Koizumi-Kim meeting, mentioned Japan's "deep remorse" over its annexation of the Korean Peninsula. But it also said that when Tokyo and Pyongyang normalize bilateral relations, they would "mutually waive all their property and claims" from causes that arose before the end of World War II.

But the abduction issue stands in the way. Japan's government has identified 17 citizens it says were kidnapped by North Korean agents in the 1970s and '80s, although advocacy groups say the actual total is likely much higher. 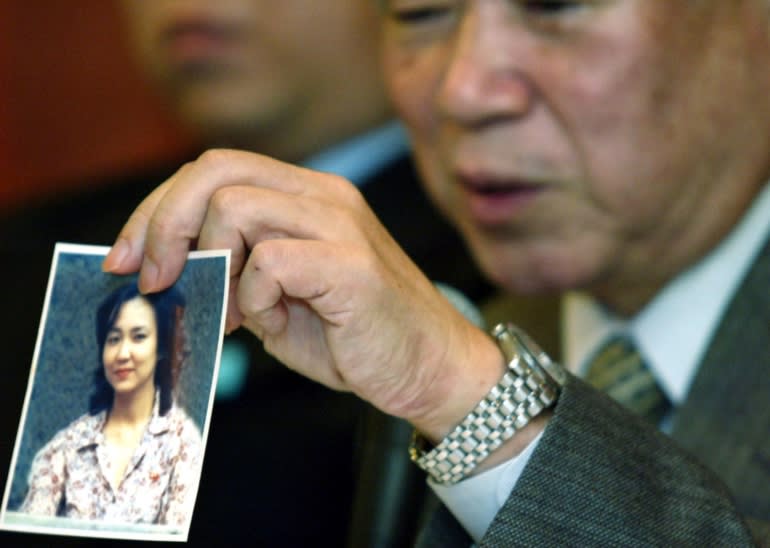 Shigeru Yokota holds up a photo of his daughter Megumi Yokota, who was abducted by North Korea in 1977 aged just 13.

Five returned home in 2002 after Koizumi's visit. North Korea has insisted that the rest are dead -- including Megumi Yokota, who became the poster child for the abductions -- or had never entered the country.

North Korean news outlets have recently stressed that the abduction issue has already been settled and that Pyongyang will demand a thorough apology and reparations for "historical crimes." The North had demanded in the 1990s that Japan pay not only for its colonial actions, but also harm caused by the division of the Korean Peninsula after the Korean War.

Any negotiations over the figure will likely prove an extremely delicate exercise. Concern is growing within Japan's Foreign Ministry that the public will strongly oppose providing money to a country that has abducted Japanese nationals and threatened their homeland with missiles. "We wonder if we can reduce the total amount" to take into account the abduction issue and the North's nuclear and missile threats, a ministry source said.

Other logistical challenges loom. "Japan's finances are tight," a Ministry of Finance official said. "We should fund any transfer to North Korea by cutting other spending, not by raising taxes or issuing new government bonds."