In his first comments on his country's position since the collapse of his summit with Trump in Vietnam in February, Kim signaled that self-reliant economic development was key to coping with economic restrictions. He said a stronger domestic economy would hurt the "hostile forces who go with bloodshot eyes miscalculating that sanctions can bring the DPRK to its knees."

"We must deal a serious blow to the hostile forces who are mistakenly determined to bring us down with sanctions by advancing the socialist construction to a high level of self-reliance that fits our circumstances and state, based on our own power, technology and resources," Kim said Wednesday, according to state news agency KCNA.

Van Jackson, a former Pentagon strategist who teaches international relations at the Victoria University of Wellington, said Kim is doubling down on the juche (self-reliance) rhetoric.

"Rather than capitulate or bargain when faced with outside pressure, he says 'North Korea will figure it out and prove the haters wrong, like we've always done'," Jackson said. "Security trumps economy, and as long as the U.S. is seeking North Korea's disarmament, North Korea has every incentive to show strength and defiance."

The North Korean leader has another platform to deliver a message on Thursday at the opening session of the country's highest political body.

The 687 newly elected members of the Supreme People's Assembly will rename Kim as chairman of the ruling Workers' Party of Korea on the first day of the rubber-stamp parliament's five-year term. Some analysts speculate he will be formally made head of state.

Kim is expected to address the audience at the Mansudae Assembly Hall in Pyongyang. Analysts are looking for further signs of what he meant in a New Year's pledge to take a "new path" should Washington maintain sanctions on his regime.

Kim chaired a Politburo meeting on Tuesday to discuss the nation's way forward under the "prevailing tense situation," KCNA said.

South Korean President Moon Jae-in has traveled to Washington for talks with U.S. President Donald Trump in a bid to save the North Korea denuclearization process. Tensions on the Korean Peninsula have increased since the collapse of the Vietnam summit.

In Hanoi, North Korea demanded the U.S. ease sanctions in exchange for the demolition of its Yongbyon nuclear complex, but Washington declined, saying it will not lift sanctions until Pyongyang has completely denuclearized.

Some analysts say that Seoul and Washington have to be ready for a return of Pyongyang provocations -- North Korea tested a nuclear device and fired a flurry of long-range missiles in 2017. With the nation rebuilding its west coast missile launch site, one possible move is the launch of a satellite.

"If North Korea launches a satellite rocket, there will be no option [for the U.S.] but to strengthen sanctions on North Korea," said Cheong Seong-chang, vice president at the Sejong Institute think tank. "But, even in that case, South Korea and the U.S. should open the door for negotiations with North Korea."

Thae Yong-ho, a former North Korean diplomat, said Kim may take a wait-and-see strategy until June, in a bid to pressure the U.S. into taking actions.

"Kim Jong Un seems to be keeping the stalemate in the first half of this year, waiting until North Korea's step-by-step resolutions are accepted," Thae, who defected to the South in 2016, wrote on his blog. "I don't think that Kim Jong Un would withdraw from denuclearization talks because it would sour his relations with China's [President] Xi Jinping." 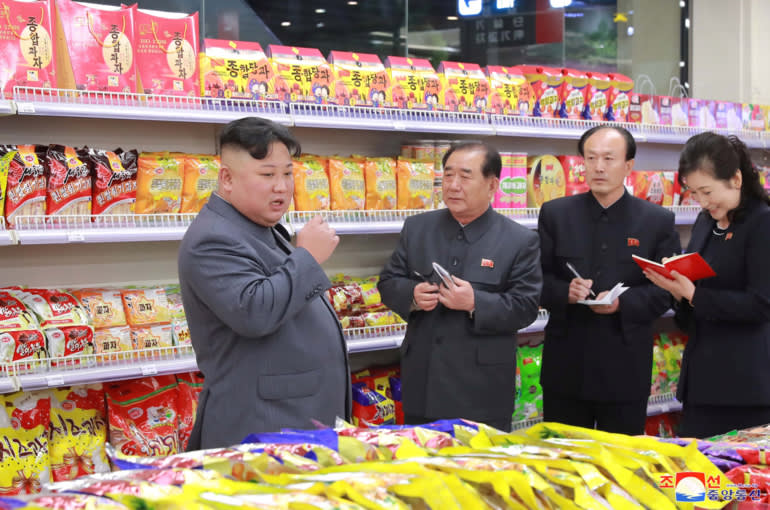 Kim is also likely to discuss his efforts to improve the impoverished nation's economy -- a push he has highlighted in recent weeks with visits to economic projects, including a department store and a tourist resort.

State media also hinted at this in Tuesday's article: "The Supreme Leader urged the need for leading officials to fully display a high sense of responsibility and creativity, and the revolutionary spirit of self-reliance and fortitude in an attitude befitting the masters of the revolution and construction under the prevailing tense situation and thus follow through on the new strategic line of the party."

The "new strategic line" can be seen as referring to a working party decision in April to focus more on "socialist economic construction," moving away from the previous policy of seeking both economic and nuclear development.

"President Moon will note that it is important to keep dialogue momentum and resume negotiations," said a Blue House source, who asked not to be named. "We believe that the top-down [negotiation] style should be maintained as well as the framework of sanctions."