The Chinese president is on a two-day trip to Pyongyang for talks with his North Korean counterpart, making him the first head of state from Beijing to visit the North in 14 years.

Thae Yong Ho, former North Korean deputy ambassador to the U.K. who defected to South Korea in 2016, told reporters in Tokyo that Kim has a new strategy to realize his country's ambition of becoming a "new nuclear state in the region."

Thae said Kim may offer to open up or abandon the five nuclear or uranium enrichment sites as Trump demanded at the failed Hanoi summit in February. Kim's aim, he said, is to avoid discussing the nuclear missiles his country has already produced, and in turn, get to keep them.

"They want to use President Xi Jinping as a mediator at the G-20 in Osaka [on June 28-29]," Thae said. "Xi may deliver this new offer directly to President Trump, so now it's up to President Trump whether he accepts the new proposals."

"We will actively contribute to peace, stability, development and prosperity in the region by strengthening communication and coordination with the Democratic People's Republic of Korea," Xi wrote. China will also engage with other stakeholders "by jointly expediting progress on dialogue and negotiations on the issues of the Korean Peninsula."

Little headway has been made on the issue since the unsuccessful February summit in Vietnam. Since then, North Korea has pressed the U.S. to make concessions, while Washington insists on maintaining sanctions.

Trump and Xi are planning to meet for dinner in Osaka after the Group of 20 summit wraps up on June 29, according to a Nikkei source. 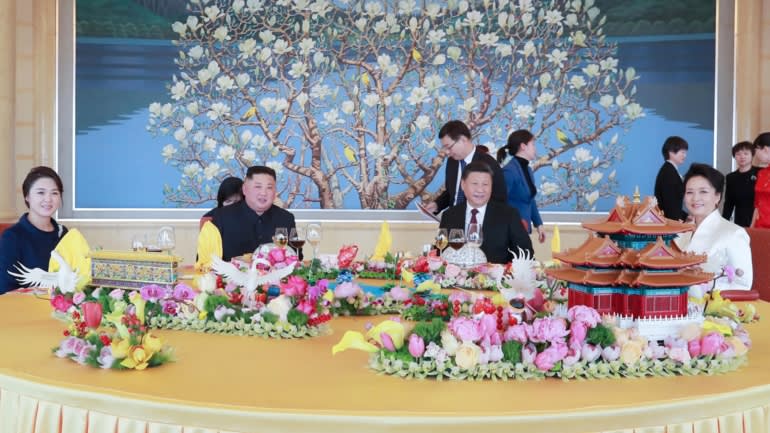 Thae was in Tokyo to promote the newly published Japanese-language version of his book "Password from 3rd floor." In the book, he revealed many secrets about the Kim regime, prompting North Korean media to call him a "criminal" and "human scum."

The former diplomat also said that Kim would be interested in meeting Japanese Prime Minister Shinzo Abe to cement his status as a regional leader.

"Kim Jong Un can only accomplish his leadership legitimacy by meeting all the important leaders in this region," Thae said.

But any meeting, he said, would come with an important caveat.

"If the Japanese government indicates any economic or humanitarian aid in advance, then I think Kim Jong Un will take that offer," he said. "But if there is no immediate or upcoming benefits for meeting Abe, I don't think [they] will meet in the near future."

Abe has recently said he will meet with Kim unconditionally, according to Japanese government sources.

This would be a shift in the position of the prime minister, who previously said he would only talk with Kim if progress was made on the long-standing issue of Japanese nationals abducted by Pyongyang in the 1970s and 1980s.

Separately, Thae said he can foresee the end of the Kim regime.

"I don't think the Kim Jong Un regime will collapse in 10 years, but it won't continue for another 20 years," Thae said. "There will be no immediate people's uprising, or military initiative to remove Kim Jong Un. I'm looking for a change of generation."

"The people now around Kim Jong Un are in their 60s to 80s, so these people are the ones who contributed to the present system. But after 10 or 20 years all of them will retire... The people who are in their 30s, once they are in power, they won't share the same juche (self-reliance) ideology."