Country boosts exports of paintings and wigs to China DANDONG, China/SEOUL -- North Korea is increasing exports of paintings and wigs to China, in an effort to earn foreign currency by exploiting a U.N. sanctions loophole.

While North Korea's exports to China halved in value on the year in 2018 due to the U.N. sanctions, China represents a record 95.8% of the country's trade value.

A Chinese trading company owner in his 40s in Dandong, Liaoning Province, was asked by a Pyongyang-based manufacturer to boost orders because the company had an ample workforce. The maker's six plants and several thousand employees have been left idle due to the economic downturn.

A worker can make only one and a half wigs a day as it requires detailed work. The delivery price of a wig is a mere 14 yuan ($1.95), but it is still a valuable source of income for North Korea.

Exports of wigs and other products jumped 159.3% on the year in 2018, all bound for China, according to data from the Korea Trade and Investment Promotion Agency.

Another source of income is paintings. In North Korea, artists are graded according to technique and create paintings for export. At the studio, about 800 employees create five paintings a month each. An employee earns an average of 800 yuan per painting, making about 4,000 yuan a month. Paintings are sold in Chinese towns of Hunchun and Yanji, which border North Korea.

North Korea -- which is known for its propaganda signs and posters -- has been actively selling paintings over the past few years, knowing that they are popular overseas, said a representative of a company who is involved in China-North Korea trade.

Meanwhile, North Korea's exports of mainstay coal and textile goods dropped more than 90% from a year earlier, worsening the lives of North Korean people. A Chinese owner of a Liaoning-based construction company, who visited Pyongyang on business in July, said roads in central Pyongyang were poorly maintained, many houses were left half-finished and the only people he saw in the capital were quite skinny.

For North Korea, which depends on China for 95% of its external trade, the border between the two countries is an economic lifeline.

But the total value of North Korea's trade in 2018 tumbled to its lowest level since Kim Jong Un's regime was inaugurated, as the country is banned from exporting major products under United Nations Security Council sanctions.

By mobilizing its people and military, North Korea is now rushing to establish trade and development centers with an eye on the future lifting of such sanctions.

The total value of North Korea's trade, excluding trade with South Korea, plunged 49% from a year earlier to $2.84 billion (about 300 billion yen) in 2018, according to the Korea Trade-Investment Promotion Agency (KOTRA).

In 2012, when Kim formally became North Korea's top leader, the value of the country's trade totaled $6.8 billion. North Korea relied on China for 87% of its trade in 2012, eight percentage points lower than in 2018.

Production activities in North Korea are in the doldrums due to a ban on exports of minerals and clothing, the country's two main export items. 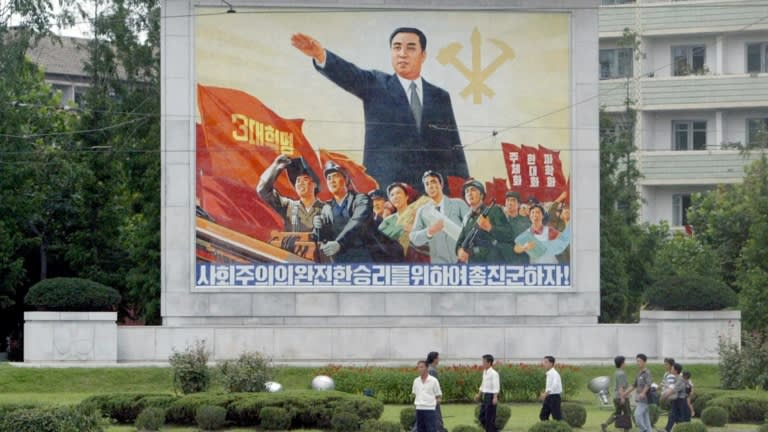 North Korea is known for its dynamic propaganda billboards. Recently it has been putting this skill to use producing artworks for export to acquire foreign currency.    © Reuters

According to estimates by the Bank of Korea, South Korea's central bank, North Korea's real gross domestic product shrank 4.1% in 2018 from the previous year.

It was the biggest rate of decline in about two decades. North Korea's real GDP plummeted 6.5% in 1997, when the country was struck by severe flooding and many people starved to death.

Under such circumstances, North Korea is increasingly counting on China economically.

In November 2018, Kim visited North Pyongan Province's Sinuiju, a city bordering China, and issued an order to "submit within several months" a large-scale city development plan, including an international airport and an amusement park.

That is because tourism is exempt from U.N. sanctions and attracting foreign tourists is a means of earning foreign currency quickly.

In June this year, Kim also visited Chagang Province's Manpho, a city on the border with China, and issued an order to compile a new city development plan.

A new bridge opened in April this year, connecting Manpho and China's Jilin Province on the other side of the Yalu River.

Sinuiju faces Dandong, a Chinese city in Liaoning Province, across the Yalu River. Dandong is a hub for trading between the two countries. The opening of the new bridge is aimed at creating a new trading hub.