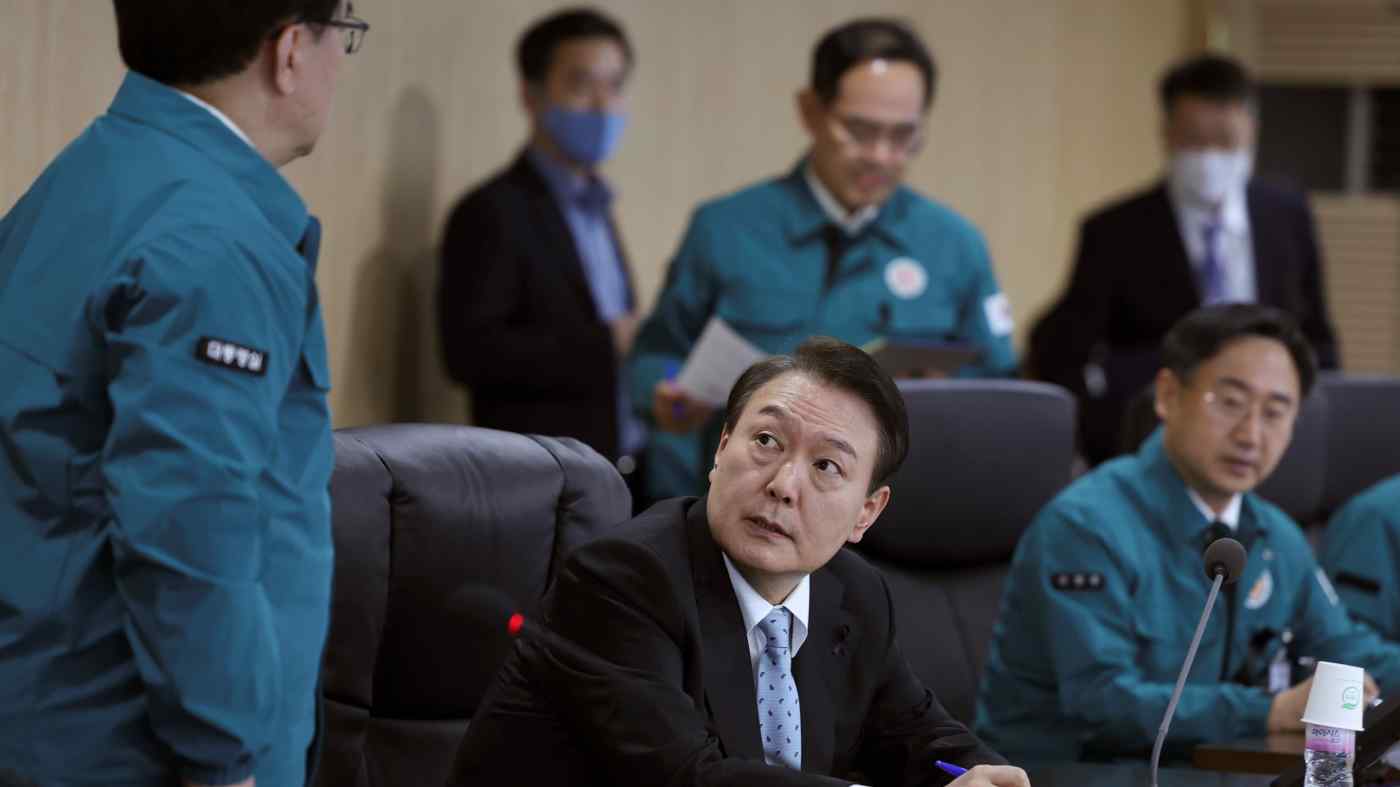 SEOUL (Reuters) -- North Korea fired at least 23 missiles into the sea on Wednesday, including one that landed less than 60 km (40 miles) off South Korea's coast, which the South's President Yoon Suk-yeol described as "territorial encroachment".

It was the first time a ballistic missile had landed near the South's waters since the peninsula was divided in 1945, and the most missiles fired by the North in a single day. South Korea issued rare air raid warnings and launched its own missiles in response.

South Korean warplanes fired three air-to-ground missiles into the sea north across the NLL in response, the South's military said. An official said the weapons used included an AGM-84H/K SLAM-ER, which is a U.S.-made "stand-off" precision attack weapon that can fly for up to 270 km (170 miles) with a 360-kg (800-lb) warhead.

The South's launches came after Yoon's office vowed a "swift and firm response".

"President Yoon Suk-yeol noted North Korea's provocation today was an effective act of territorial encroachment by a missile intruding the NLL for the first time since (the two Koreas') division," his office said in a statement.

When asked whether the missile was flying towards the South's territory and should have been intercepted, a senior presidential official said: "Strictly speaking, it did not land in our territory but in the Exclusive Economic Zone under our jurisdiction, therefore it was not subject to interception."

That missile was one of three short-range ballistic missiles fired from the North Korean coastal area of Wonsan into the sea, South Korea's Joint Chiefs of Staff (JCS) said. The JCS later said as many as 14 other missiles of various types had been fired from North Korea's east and west coasts. A file image of a North Korean missile launch is shown on a TV news program at Seoul Station on Nov. 2.   © AP

The JCS said at least one of the missiles landed 26 km south of the NLL, 57 km from the South Korean city of Sokcho, on the east coast, and 167 km from the island of Ulleung, where air raid warnings were sounded.

"We heard the siren at around 8:55 a.m. and all of us in the building went down to the evacuation place in the basement," an Ulleung county official told Reuters. "We stayed there until we came upstairs at around 9:15 after hearing that the projectile fell into the high seas."

The North also fired more than 100 rounds of artillery from its east coast into a military buffer zone established in a military agreement with the South, South Korea's military said.

North and South Korea are technically still at war because their 1950-53 conflict ended in a truce, not a peace treaty.

Nuclear-armed North Korea has tested a record number of missiles this year, and officials in Seoul and Washington say the North has completed technical preparations to conduct a nuclear weapon test for the first time since 2017.

The launches came just hours after Pyongyang demanded that the United States and South Korea stop large-scale military exercises, saying such "military rashness and provocation can be no longer tolerated".

Despite Yoon's declaring a national week of mourning after more than 150 people were killed in a weekend crowd surge in Seoul, the United States and South Korea began one of their largest combined military air drills on Monday. Dubbed Vigilant Storm, the exercises involve hundreds of warplanes from both sides staging mock attacks 24 hours a day.

North Korea, which for years has pursued missile and nuclear programs in defiance of U.N. sanctions, had said that a recent flurry of launches were in response to allied drills.

Pak Jong Chon, secretary of the Central Committee of North Korea's ruling Workers' Party, said in a statement on Wednesday that the number of warplanes involved in Vigilant Storm proved the exercise was "aggressive and provocative" and specifically targeted North Korea. He said even its name imitated the U.S.-led Operation Desert Storm against Iraq in the 1990s.

"The hostile forces' inordinate moves for military confrontation have created a grave situation on the Korean peninsula," Pak said in a statement carried by state news agency KCNA.

On Tuesday in Washington, U.S. State Department spokesperson Ned Price said that the drills were "purely defensive in nature" and that the United States had made clear to North Korea that it harboured no hostile intent.

Price added that the United States and its allies had also made clear that there would be "profound costs and profound consequences" if North Korea resumed nuclear testing. He did not elaborate.

South Korea's Ministry of Land, Infrastructure and Transport said that because of the launches, some air routes over the sea between North Korea and Japan would be closed until Thursday.

Japanese Defence Minister Yasukazu Hamada said the government believed at least two ballistic missiles had been launched from North Korea, one flying east and another southeast.

North Korea's actions threaten the peace and stability of Japan, the wider region, as well as the broader international community, Hamada said.