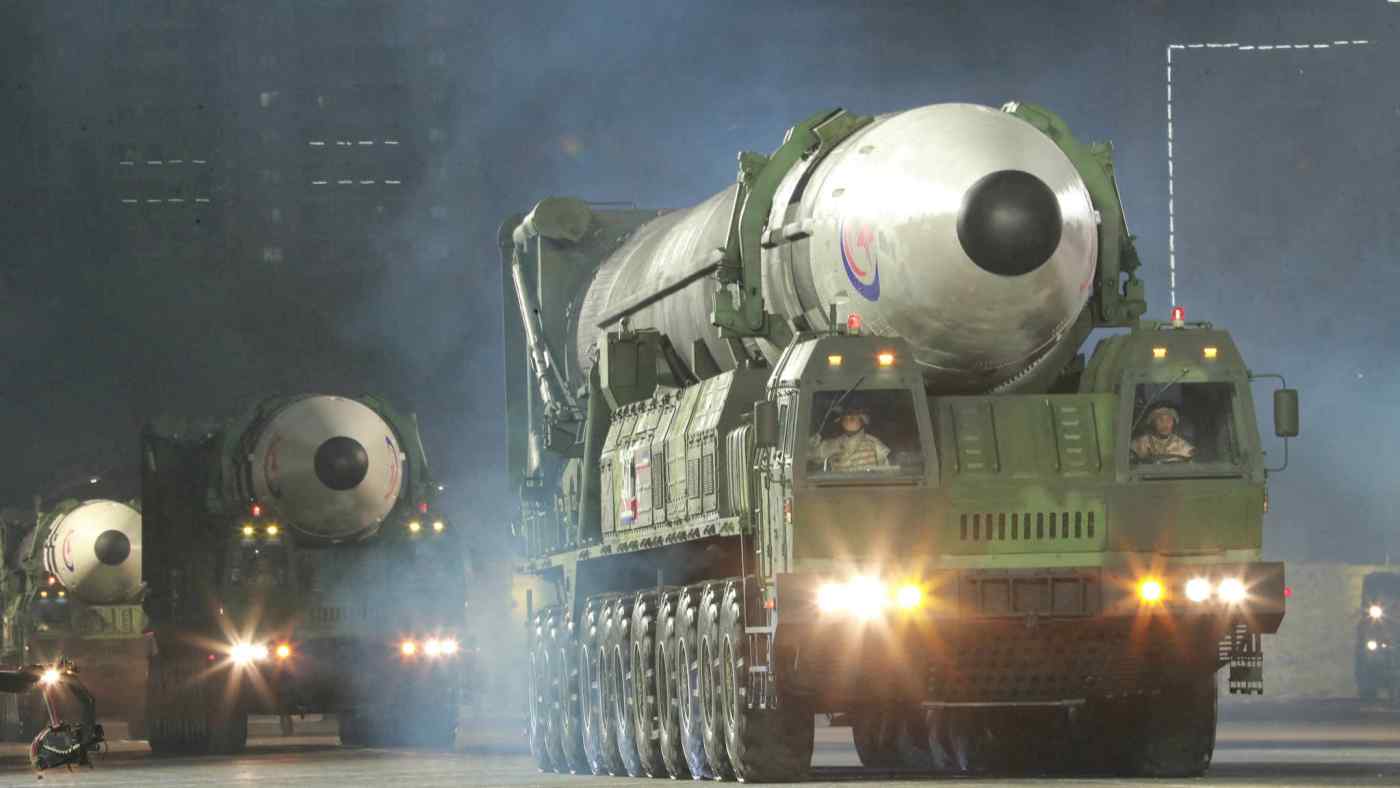 Hwasong-17 intercontinental ballistic missiles take part in a nighttime military parade in Pyongyang in this undated photo published on April 26. (KCNA via Reuters)
May 25, 2022 06:47 JSTUpdated on May 25, 2022 12:15 JST | North Korea
CopyCopied

SEOUL (Reuters) -- North Korea fired three missiles, including one thought to be an intercontinental ballistic missile (ICBM), on Wednesday, after U.S. President Joe Biden left Asia following a trip in which he agreed to new measures to deter the nuclear-armed state.

South Korea's Joint Chiefs of Staff said the three missiles were fired in less than an hour from the Sunan area of the North's capital, Pyongyang, where its international airport has become a hub of missile tests.

The first missile launched on Wednesday appeared to be an ICBM, while a second unidentified missile appears to have failed midflight, the South said. The third missile was a short-range ballistic missile (SRBM), it said.

North Korea has conducted a flurry of missile launches this year, from hypersonic weapons to test-firing its largest ICBMs for the first time in nearly five years. It also appears to be preparing for what would be its first nuclear test since 2017.

U.S. and South Korean officials had recently warned that North Korea appeared ready for another weapons test, possibly during Biden's visit, which was his first trip to Asia as president and included a summit with South Korean President Yoon Suk-yeol in Seoul.

Yoon, who took office on May 10, convened his first meeting of the National Security Council, which strongly condemned the latest launch as a "grave provocation," especially as it came before Biden returned home.

Yoon ordered the aides to strengthen the U.S. extended deterrence and combined defense posture as agreed upon with Biden, his office said.

"North Korea's continued provocations will only result in even stronger, faster South Korea-U.S. deterrence, and bring deeper isolation upon itself," Yoon's government said in a separate statement.

A White House official said that Biden, who departed Japan on Tuesday evening, had been briefed on the launches and would continue to receive updates.

Japan reported at least two launches but acknowledged that there may have been more. One of the missiles flew a distance of about 750 km (465 miles) to a maximum altitude of 50 km and appeared to be capable of shifting its trajectory in flight, Japan's defense minister said. Another missile flew about 300 km and reached a maximum altitude of 550 km, he said.

The U.S. military's Indo-Pacific Command said it was aware of "multiple" launches. They highlighted the "destabilizing impact of the DPRK's illicit weapons program" but did not pose an immediate threat, it said in a statement, using the initials of North Korea's official name.

But they also offered to send COVID-19 vaccines to North Korea as the isolated country battles its first confirmed outbreak, and called on Pyongyang to return to diplomacy.

There had been no response from Pyongyang to the diplomatic overtures or offers of aid, Biden said at the time.

The waning hours of Biden's visit to the region also saw Russian and Chinese bombers flying joint patrols near Japanese and South Korea air defense zones on Tuesday in a pointed farewell.