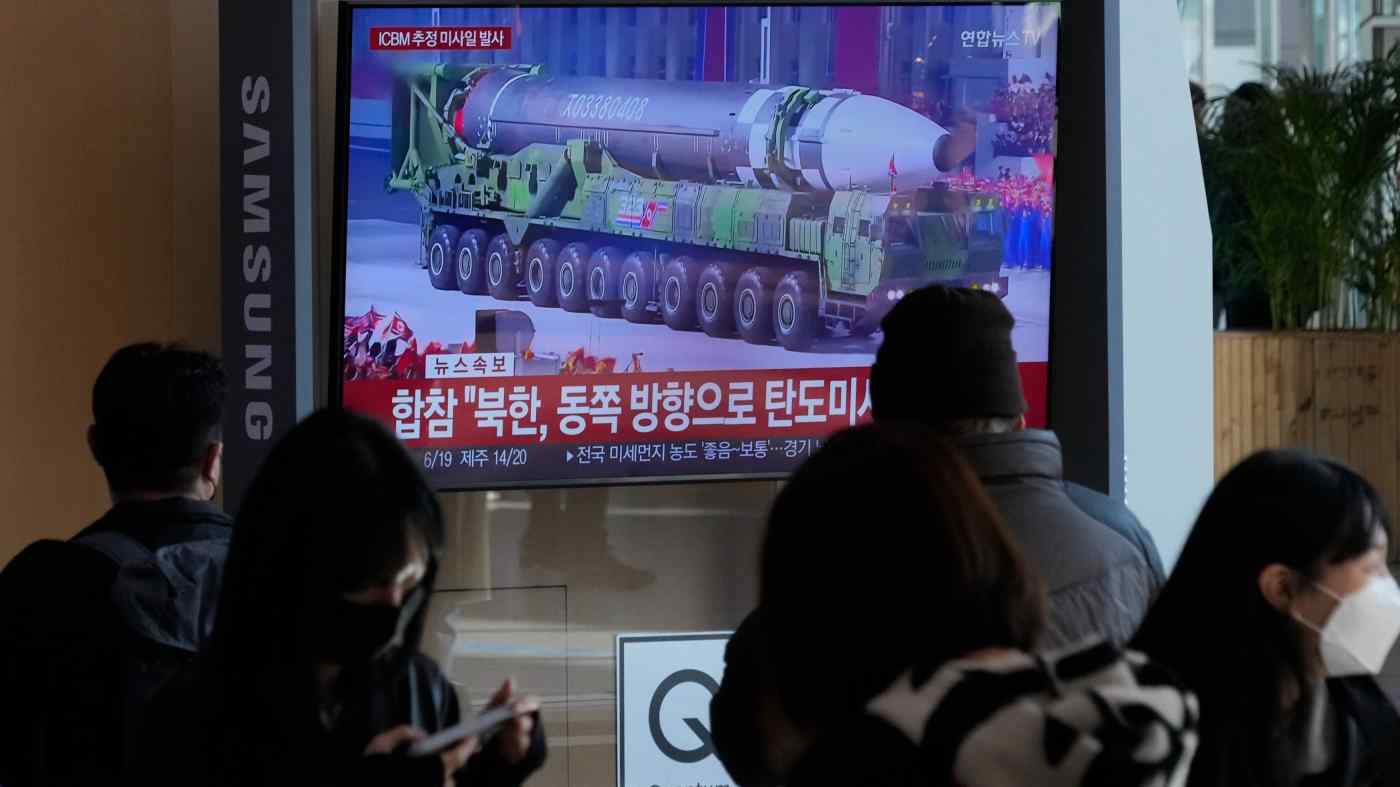 The launch, reported by both South Korean and Japanese officials, comes a day after a smaller missile launch by the North and its warning of "fiercer military responses" to the U.S. boosting its regional security presence.

This has become a record-breaking year for the nuclear-armed country's missile program as it has resumed testing ICBMs for the first time since 2017 and broke its self-imposed moratorium on long-range launches as denuclearization talks stalled.

Japanese Defence Minister Yasukazu Hamada told reporters the latest missile was capable of flying as far as 15,000 km, while Chief Cabinet Secretary Hirokazu Matsuno said it flew to an altitude of about 6,000 km with a range of 1,000 km, before landing in the sea roughly 200 kilometers west of Oshima-Oshima Island in Hokkaido.

North Korea often conducts its tests on such "lofted" trajectories where the missile flies much higher into space but to a shorter distance than it would if fired on a normal trajectory.

Japanese Prime Minister Fumio Kishida said there had been no reports of damage but the North's repeated missile launches could not be tolerated.

Misawa Airbase, which hosts both Japanese and U.S. troops, briefly issued an order to seek cover, according to a post on the base's Facebook page.

North Korea's last suspected ICBM test was on Nov. 3, when it fired multiple missiles into the sea in what it said was a protest against allied military drills by South Korea and the United States.

Friday's launch would be the eighth ICBM test this year by North Korea, based on a tally from the U.S. State Department.

ICBMs are North Korea's longest-range weapon and are designed to carry a nuclear warhead as far as any location in the continental United States.

On Thursday, North Korea fired a short-range ballistic missile while its foreign minister, Choe Son Hui, warned of "fiercer military responses" to U.S. moves to boost its military presence, saying Washington was taking a "gamble it will regret."

In a statement carried by state media, Choe condemned a Sunday trilateral summit of the United States, South Korea and Japan during which those countries' leaders criticized Pyongyang's weapons tests and pledged greater security cooperation.

Friday's launch came as U.S. Vice President Kamala Harris was in Thailand for the Asia-Pacific Economic Cooperation (APEC) summit, amid geopolitical tensions over the war in Ukraine and other flashpoints such as Taiwan and the Korean peninsula.

"Pyongyang is trying to disrupt international cooperation against it by escalating military tensions and suggesting it has the capability of holding American cities at risk of nuclear attack," said Leif-Eric Easley, a professor at Ewha University in Seoul.

This year North Korea has conducted a record number of ballistic missile tests, which are banned by United Nations Security Council resolutions that have sanctioned the country over its missile and nuclear weapons programs.

ICBMs are ballistic missiles with a minimum range of about 5,500 kilometers (3,400 miles), chiefly designed for nuclear weapons delivery. Some are capable of traveling 10,000 km (6,200 miles) or more.

Some missiles carry only one warhead but analysts suspect that North Korea is seeking to develop ICBMs that can carry multiple warheads, each able to navigate to a separate aimpoint, on independently targetable reentry vehicles (MIRVs).

Based on photos released by state media, analysts said the Nov. 3 launch appeared to be a previously unseen ICBM, possibly a variant of the Hwasong-15 ICBM, which was first tested in 2017 and may have been launched in March as well.

A South Korean official said the Nov. 3 test may have failed at high altitude. South Korean and U.S. officials have reported that a number of North Korean ICBM tests appeared to have failed this year.

North Korea claimed to have successfully launched its massive new Hwasong-17 ICBM for the first time on March 24, but South Korean and U.S. officials concluded that the launch appears to have been the previously launched Hwasong-15.

The March 24 launch was nevertheless the biggest ICBM test ever staged by the North, flying 67.5 minutes to a maximum altitude of 6,248.5 km (3,905 miles), North Korean state media reported.

The North has also fired hundreds of artillery shells into the sea recently as South Korea and the United States staged exercises, some of which involved Japan. A North Korean intercontinental ballistic missile during a test-launch on March 24. (File photo by KCNA)
CopyCopied