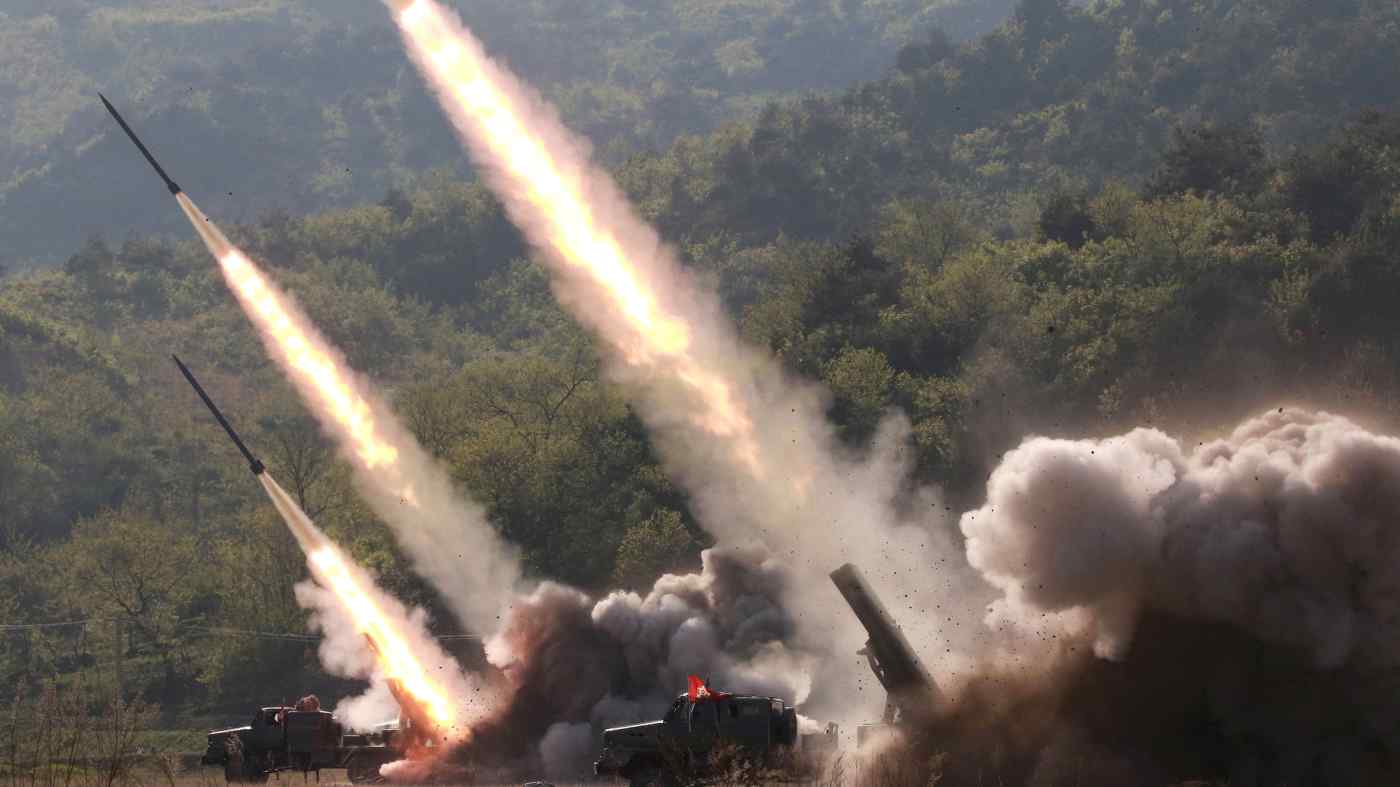 TOKYO -- The short-range ballistic missiles tested by North Korea on Wednesday took irregular paths rather than typical ballistic trajectories, a development that stands to complicate Japanese efforts to track and even intercept such weapons.

The Japan Coast Guard said at 12:39 p.m. -- minutes after the launches -- that the two missiles fell outside the nation's exclusive economic zone in the Sea of Japan. Prime Minister Yoshihide Suga said around 1:30 that the missiles were "presumed" outside the EEZ.

But analysts later found irregular trajectories that extended the range beyond what was first calculated. Talking to reporters not long after 4 p.m., Defense Minister Nobuo Kishi put the EEZ in the possible landing spots.

At 9 p.m., the official line changed once again: The missiles had in fact landed in the EEZ.

The repeated corrections were unusual and reflected how far North Korea has progressed in developing ballistic missile technology. These advances will make it harder for Japan to track the rockets.

The Self-Defense Forces identify and track objects flying toward Japan through a nationwide automatic warning and control system. For a conventional high-speed ballistic missile, radars can immediately calculate the parabolic flight path based on launch angle and speed.

Chief Cabinet Secretary Katsunobu Kato told reporters Thursday that the projectiles were short-range ballistic missiles using solid-fuel engines. They resembled the short-range missiles fired in May 2019 that were able to trace irregular trajectories, he said.

The missiles use two methods to escape detection.

Low-altitude flight is one. According the Ministry of Defense, the missiles had a maximum altitude of 50 km above sea level. Owing to the Earth's curvature, some lower-level regions of the Korean Peninsula are invisible to radar on Japanese islands.

The other way is having the missiles sharply change course before landing. A parabolic flight path can be calculated, but these new missiles can suddenly veer upward in the final leg of their flight, enabling them to deviate from the path assumed by the radar system.

But new defense systems will spur new advances in missiles, and vice versa. With interceptor missiles costing the equivalent of tens of millions of dollars apiece, critics say the expense will be unsustainable.

"There's now a limit to what we can do with interceptors alone," a senior Japanese government official said.

"Missile defense alone is not enough to deal with this problem," said Hirofumi Tosaki, director of the Center for Disarmament, Science and Technology at the Japan Institute of International Affairs.

"We must also consider base strike capabilities to prevent missile launches from the other side," he said. "Closer coordination with the U.S. and South Korea will be necessary, too."

Japan is independently developing long-range cruise missiles as a deterrent. The government says these are for responding to enemy vessels at a distance. If policymakers greenlight base strike capabilities, the cruise missiles could be repurposed to target missile-launching sites in enemy territory.

Some are calling for Japan to cooperate with the U.S. to host missiles that put both North Korea and China within striking range. The U.S. military is pushing forward a plan to build a network of midrange missiles in Asia. Japanese territory in the East China Sea would be a candidate for this.