Pyongyang likely to think hard before accepting vaccines from abroad 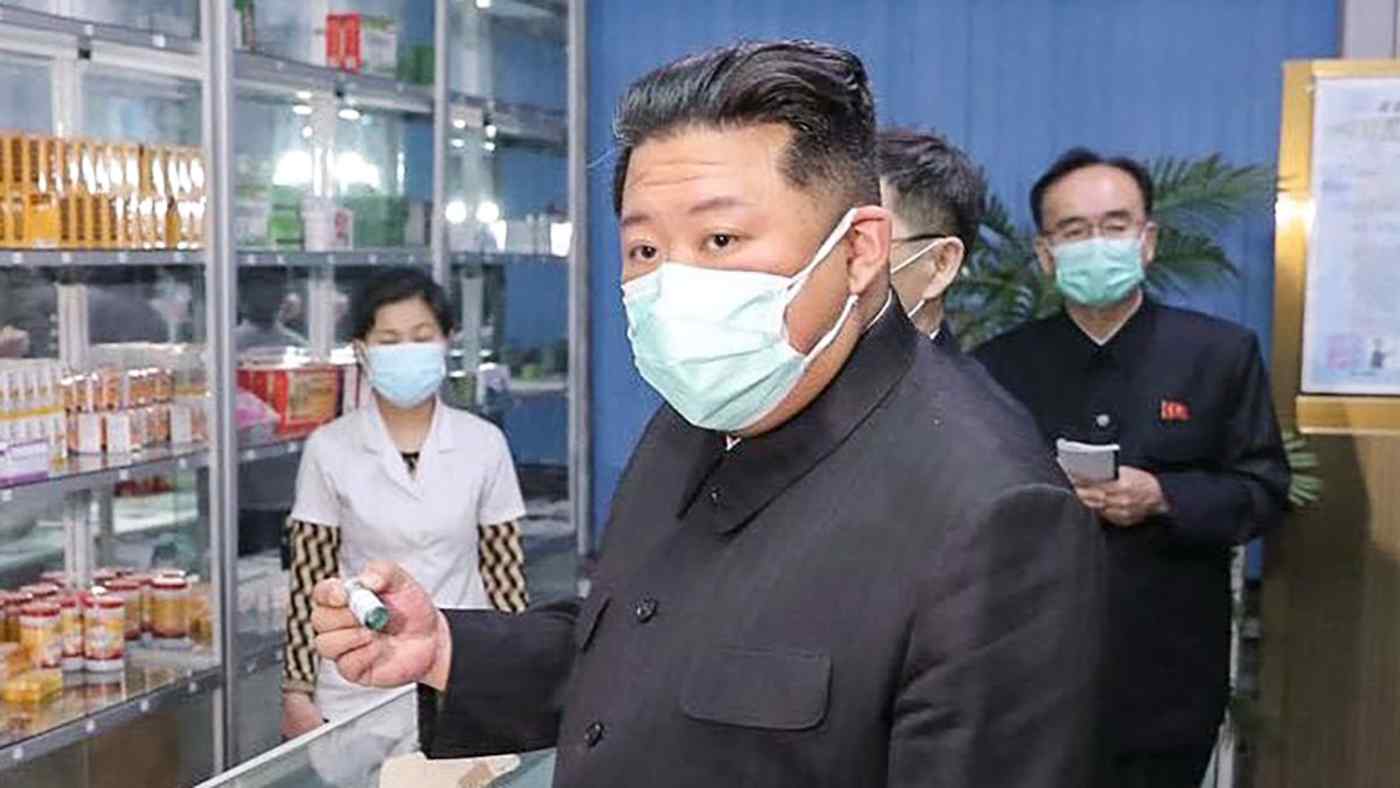 SEOUL -- After more than two years of insisting it was COVID-free, North Korea is now battling a massive surge of infections and is reaching out for help to its closest ally and main economic benefactor: China.

Last Thursday, North Korean media said the country was fighting its "first-ever" COVID outbreak after the omicron variant was detected on May 8 in Pyongyang. At a Politburo meeting the same day, leader Kim Jong Un wore a mask in public for the first time, and ordered all cities and counties across the nation to "thoroughly lock down" their regions.

The isolated country reported 269,510 more people with fever symptoms on Monday, bringing the total to nearly 1.5 million, according to state media KCNA. The death toll, in a nation where few are vaccinated and the health system is rudimentary, grew to 56.

The Rodong Sinmun, the Workers' Party mouthpiece, on Saturday reported that the spread of the virus was "not uncontrollable" but that it had increased "within locked areas and relevant units."

The paper also said it would be helpful for North Korea to "actively learn from the advanced and rich anti-epidemic successes and experience already gained by the Chinese party and people."

The virus has recently spread in Chinese towns bordering North Korea, prompting a re-suspension of overland trade between the two countries last month. But China is pledging support to its neighbor.

"As the DPRK's comrade, neighbor and friend, China is ready to go all-out to provide support and assistance to the DPRK in fighting the virus," foreign ministry spokesperson Zhao Lijian told reporters in Beijing on Thursday, using the acronym for North Korea's formal name.

South Korean media reported on Sunday that leader Kim Jong Un had already "asked China for assistance" with its domestic COVID situation through its "diplomatic channel." Details, however, remain unclear. 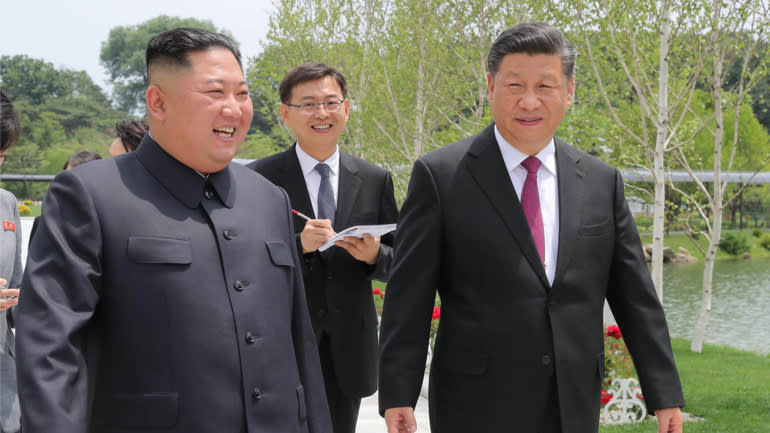 North Korea has been wary of Chinese vaccines in the past -- rejecting nearly 3 million Sinovac doses last year. But, for now, Pyongyang is more likely to accept such aid from China than other countries, especially Western ones.

North Korea has also turned down vaccines offered by the World Health Organization's COVAX program. According to UNICEF earlier this year, the number of COVAX vaccine doses earmarked for North Korea was scaled back from 8.11 million in 2021 to 1.54 million, but were not sent.

There are reports that North Korea brought in the Russian-made Sputnik vaccine in 2020 to inoculate Workers' Party officials. Publicly, however, North Korea has shown little interest in vaccines. If Chinese vaccines are accepted this time around, they will likely be used for the broader population, while those at the top may try to obtain other vaccines through different, probably secretive, means.

Even if North Korea is willing to accept this kind of aid from China, however, it remains unclear just how much assistance Beijing can offer. China has been grappling with its own surge in infections over the past few months, locking down major cities like Shanghai in the face of the pandemic.

In the worst case scenario of the spread of the virus becoming uncontrollable, North Korea will have to look elsewhere for additional support. After China, its most likely choice could be either COVAX or other multilateral aid options. A quicker -- yet politically less palatable -- choice, would be to accept vaccines from South Korea. 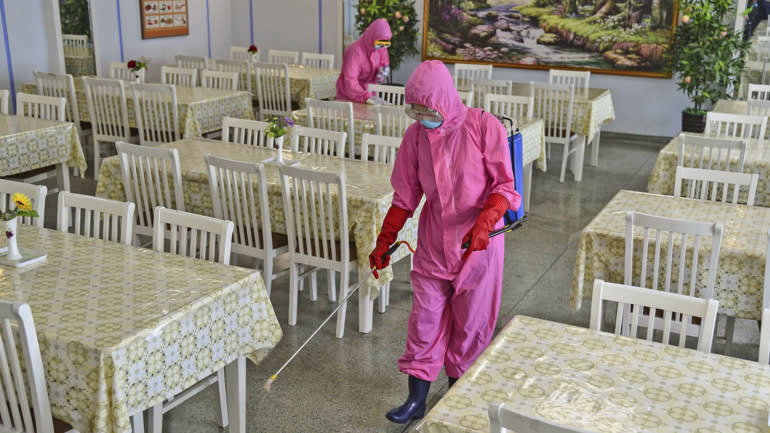 Workers disinfect a dining room at a sanitary supplies factory in Pyongyang on Monday.   © Kyodo

South Korea's new president, Yoon Suk-yeol, who is hawkish on the North's missile and nuclear ambitions, offered assistance on Monday. Pyongyang has yet to respond.

"If the North Korean authorities accept, we will not spare any necessary support, such as medicine, including COVID-19 vaccines, medical equipment and health care personnel," Yoon said in a speech at the National Assembly.

However, Sangsoo Lee, head of the Stockholm Korea Center at the Institute for Security and Development Policy, said North Korea will likely think hard before accepting any vaccines from overseas, especially from the West.

"In the case that China's support is not sufficient, North Korea may decide to reach out to European humanitarian aid groups to get more help," Lee said. "If North Korea has to accept vaccines from abroad, especially from the U.S., this could have a negative impact on Kim Jong Un's leadership."

Lee added that North Korea may also be apprehensive because accepting external support means it would have to let outsiders into the country, potentially resulting in "leaks" of domestic information.

In an interview with South Korean media on Friday, Thae Yong-ho, a high-level North Korean defector who is now a lawmaker in South Korea, cited the North's lack of refrigeration facilities as another obstacle to accepting vaccines.

Ramon Pacheco Pardo, KF-VUB Korea chair and professor at King's College London, said that North Korea seems "overwhelmed by omicron and now needs to try to get help to manage the situation" to stop things from getting worse.

"The Kim regime has probably realized that it cannot pretend that there is no COVID in the country, and is now considering all options to deal with this wave of infections," Pacheco Pardo said.

Lee also fears the situation in North Korea may be extremely serious.

Yet Pacheco Pardo sees this crisis as an "opportunity" for diplomacy.

"North Korea may be willing to engage [with external actors] on this matter," he told Nikkei Asia.

"In my view, South Korea and the U.S. should offer vaccines, medicines, expertise, etc., to North Korea," Pacheco Pardo said, adding that such an approach could "create the opportunity for more sustainable engagement" with Pyongyang.

The chief nuclear envoys of South Korea and the U.S. spoke by phone on Monday, agreeing to consult closely with each other on ways to provide humanitarian assistance to North Korea.