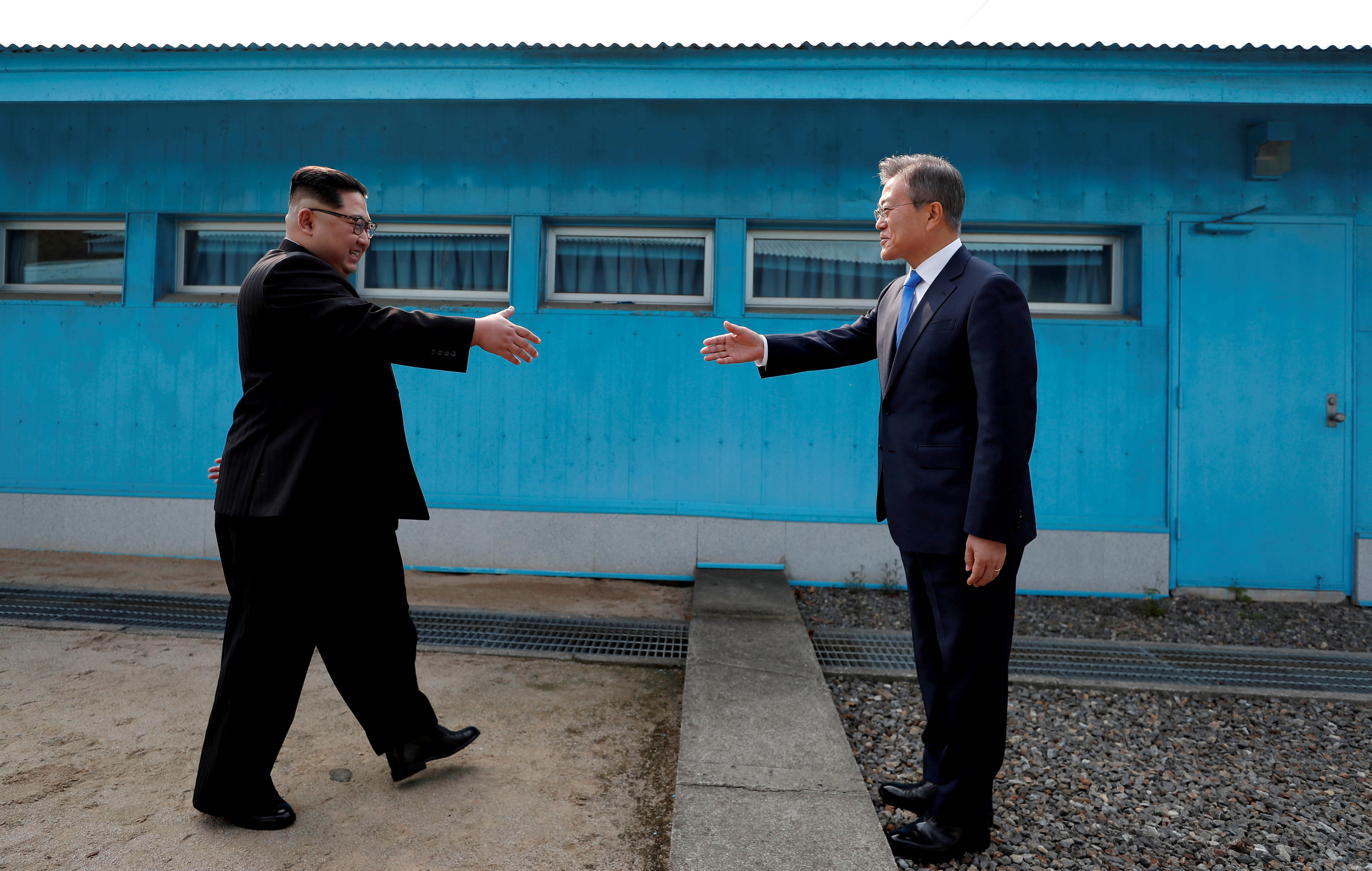 Moon and Kim Jong Un meet for the first time in April at the truce village of Panmunjom inside the demilitarized zone separating the two Koreas.   © Reuters

SEOUL -- President Moon Jae-in is pulling out all the stops ahead of a possible visit by North Korean leader Kim Jong Un to South Korea, booking him a five-star hotel room, arranging a ride on a KTX bullet train and making plans for a trip to a resort island.

Moon, who traveled to Pyongyang to meet Kim in September, has made a reciprocal offer for the dictator to visit Seoul. It is now up to Kim whether he becomes the first leader of the reclusive state to travel south, ahead of a potential second summit with U.S. President Donald Trump early next year.

The liberal leader of South Korea has made peace on the Korean Peninsula his highest priority, extending olive branches even last year when North Korea was testing long-range missiles and conducting nuclear tests. He wants the visit to take place for several reasons -- as a symbolic move toward denuclearization; to show the world he can act as a mediator between Pyongyang and Washington ahead of any Trump-Kim summit; and also to show off South Korea's first-world technologies.

"I think Chairman Kim Jong Un's visit to Seoul has significant message," Moon told reporters on his plane back from the Group of 20 summit in Argentina earlier this week. "A North Korean leader has never had come to Seoul before. So if he comes, it gives a message of peace, his will to denuclearize and inter-Korean relations to the world."

Moon summoned officials on Thursday to discuss preparations for a Kim visit, having invited him to come Dec. 12-14, according South Korea's Chosun Ilbo daily. The government in Seoul received a positive response from the North, the paper said.

Yet it is still unclear whether Kim will accept the invitation, as he appears to be placing a higher priority on a summit with Trump, which the president has said could take place in January or February. Talks between Pyongyang and Washington have stalled over apparent differences in negotiation objectives -- the U.S. has repeatedly called on the regime to allow inspectors access to its nuclear sites, while North Korea is seeking an end to sanctions and a joint declaration to officially end the Korean War.

The security of Kim is also seen as a grave concern for North Korea owing to the U.S. military's presence in Seoul. And any visit may be tainted by huge protests by South Korean conservatives who oppose closer inter-Korean ties. Moon has called on the South Korean people to welcome Kim, but the onus will be on government in Seoul to guarantee his security.

Separately, North Korea's Foreign Minister Ri Yong Ho visited his counterpart in China on Friday, where he repeated a commitment to denuclearization and maintaining peace on the peninsula. He added that North Korea hoped to build "required mutual trust" with the U.S. But should Kim make the short trip South -- the capitals are only about 200 kilometers apart -- Seoul's Grand Walkerhill Hotel is emerging as a strong candidate for his stay, as it is regarded as having strong security for its location outside the city center and next to a mountain. Kim's sister, Kim Yo Jong, stayed there when she came to the city in February as part of a delegation attending the Pyeongchang Winter Olympics.

The North Korea leader is expected to visit Jeju Island, off the south coast of the peninsula. Moon promised to take Kim to the island's Mt. Halla, the highest peak in the country, when he visited the North's Mt. Paektu. Jeju Province Gov. Won Hee-ryong went up the mountain last month in preparation for the visit.

Kim also has personal link to Jeju as his maternal grandfather is from the island. His mother Ko Yong Hui, whom Kim has a special affection for, was a Korean-Japanese dancer who went to the North in the 1960s.

South Korea is also preparing a KTX ride for Kim as he is said to be interested in the bullet train that took his sister from Seoul to the Olympic site. The two Koreas on Wednesday completed a joint survey of a rail line on the west coast of North Korea as part of a plan to modernize the North's railways and link to the South. Officials were to start inspecting the North's eastern line from Saturday.

Moon also plans to highlight the South's technological prowess, and take Kim to a industrial complex run by Samsung Electronics, the country's biggest company, or to Posco, the South's largest steelmaker. Samsung said it has yet to receive a request from the government.

But tellingly, North Korean media has not made any mention of a possible Kim visit to the South.

Shin Yul, a political commentator who teaches political science at Myongji University, was skeptical that Kim would come to Seoul.

"The key to the Korean Peninsula crisis is U.S.-North Korea relations, not inter-Korean ones," Shin said. "I am skeptical whether Kim would come here as Seoul has little to offer him."