NEW YORK/SEOUL -- South Korean President Moon Jae-in returned to Seoul on Thursday following three days of talks in Pyongyang with North Korean leader Kim Jong Un. Now the stage moves to New York, where a host of appearances and meetings are scheduled to align with the United Nations General Assembly next week.

The date of U.S. Secretary of State Mike Pompeo's meeting with North Korean Foreign Minister Ri Yong Ho has not yet been confirmed, Nikki Haley, the American ambassador to the U.N., told reporters on Thursday. "I know that they have agreed to meet," Haley said. "I don't know if it'll happen next week."

In a statement on Wednesday, Pompeo said that he had extended an invitation to his North Korean counterpart for talks in New York on the sidelines of the U.N.'s annual gathering.

All eyes will be on New York, where North Korea will be a hot topic in discussions among world leaders. Few have forgotten the splash President Donald Trump made at last year's assembly, when, at the height of U.S. tensions with the North, he referred to North Korean leader Kim Jong Un as "Rocket Man" and threatened to "totally destroy" the North.

This year, Trump heads into the General Assembly with a much-improved opinion of Kim and hopes to flesh out the agreement reached at June's historic summit with North Korea.

Still, two U.S.-hosted meetings scheduled to take place during the assembly are likely to showcase the more cautious side of Washington's stance toward the North. 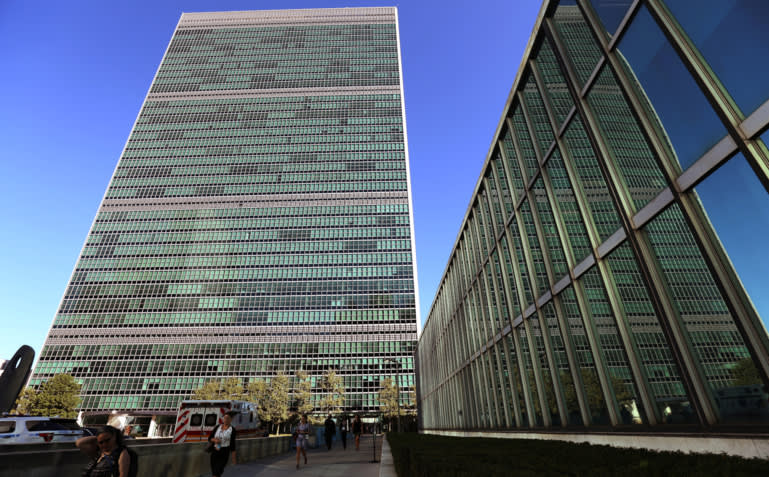 On Sept. 26, Trump will chair a meeting of the Security Council on the nonproliferation of weapons of mass destruction -- a broad topic that will cover everything from North Korean denuclearization talks to Iranian WMD development. Pompeo will also chair a council meeting dedicated to North Korean nuclear talks the following day and is expected to urge countries to implement sanctions against the North.

Haley suggested that these events stand to show that while "we have a lot that we can feel good about," in terms of progress on denuclearization, "we are a long way from making sure we get to that place."

With the simultaneous push for fresh talks with Pyongyang, the U.S. hopes to break a deadlock that has set in since the secretary's last visit to the North in early July. As recently as last month, Trump called off a planned visit by Pompeo, citing a lack of progress on denuclearization since Singapore.

During Moon's visit to Pyongyang, Kim agreed to dismantle a key nuclear test facility if the U.S. fulfilled certain requests. Kim expressed an aim to completely denuclearize as soon as possible and focus on economic development, as well as a readiness to allow an inspection of the Punggye-ri nuclear test site that was apparently demolished in May, Moon told reporters in Seoul.

Based on Kim's attitude, Moon said the conditions for further talks between the North and the U.S. had been met. The Southern president added that he would deliver Trump messages whose content was not included in Wednesday's North-South joint statement when he meets the American leader Monday. Moon also said he intended to negotiate toward declaring an end to the Korean War, a goal the North has sought.

Pompeo later congratulated Moon and Kim for the "successful outcome" of their summit in a statement and said the U.S. "is prepared to engage immediately in negotiations" with the North.

But Pompeo's statement diverged from Moon and Kim's agreement on several points. For one, the secretary said Kim had reaffirmed goals including the "permanent dismantlement of all facilities at Yongbyon in the presence of U.S. and International Atomic Energy Agency inspectors," referring to the North's main nuclear test site. In truth, the North had said only that it would permanently dismantle the site if the U.S. took corresponding measures on its end.

Pompeo also said the North's denuclearization was "to be completed by January 2021," the end of Trump's current term, "as committed by Chairman Kim." Earlier this month, South Korea's national security adviser Chung Eui-Yong met with Kim and reported that the North Korean leader had suggested that deadline, but no reference to "2021" appeared in this week's agreement or subsequent press conferences.

It is possible that the U.S. and North Korea have reached agreements under the table that were not included in the North-South statement. Pompeo told U.S. media company Fox News in an interview recorded Wednesday that "we made another step, where we will get verification of an element of North Korea's program on the ground." He added that "I talk to my counterparts there with some frequency. It doesn't get reported."

There are concerns that having verbal agreements with no proof could cause trouble down the road. In August, U.S. national security adviser John Bolton told Fox News that Kim promised Moon in their April summit to denuclearize "within a year," raising doubts as to whether he and Pompeo, as well as other U.S. officials referring to the 2021 deadline, are on the same page.

During this week's North-South summit, Seoul pushed Pyongyang to follow Washington's requests to report on nuclear facilities and gradually dispose of its nuclear warheads. But judging by the talks' outcome, it appears the North showed no intent to dispose of its warheads or ballistic missiles. Doubts remain about whether it is truly willing to completely denuclearize.

The U.S. hopes to reopen dialogue with the North and bridge the gaps in understanding starting with the proposed foreign ministerial talks set to take place as soon as next week. But in Wednesday's press conference, Kim hinted that he would not go along with negotiations with the U.S. in the driver's seat.