System glitches: Capitalism shows its age in the digital era 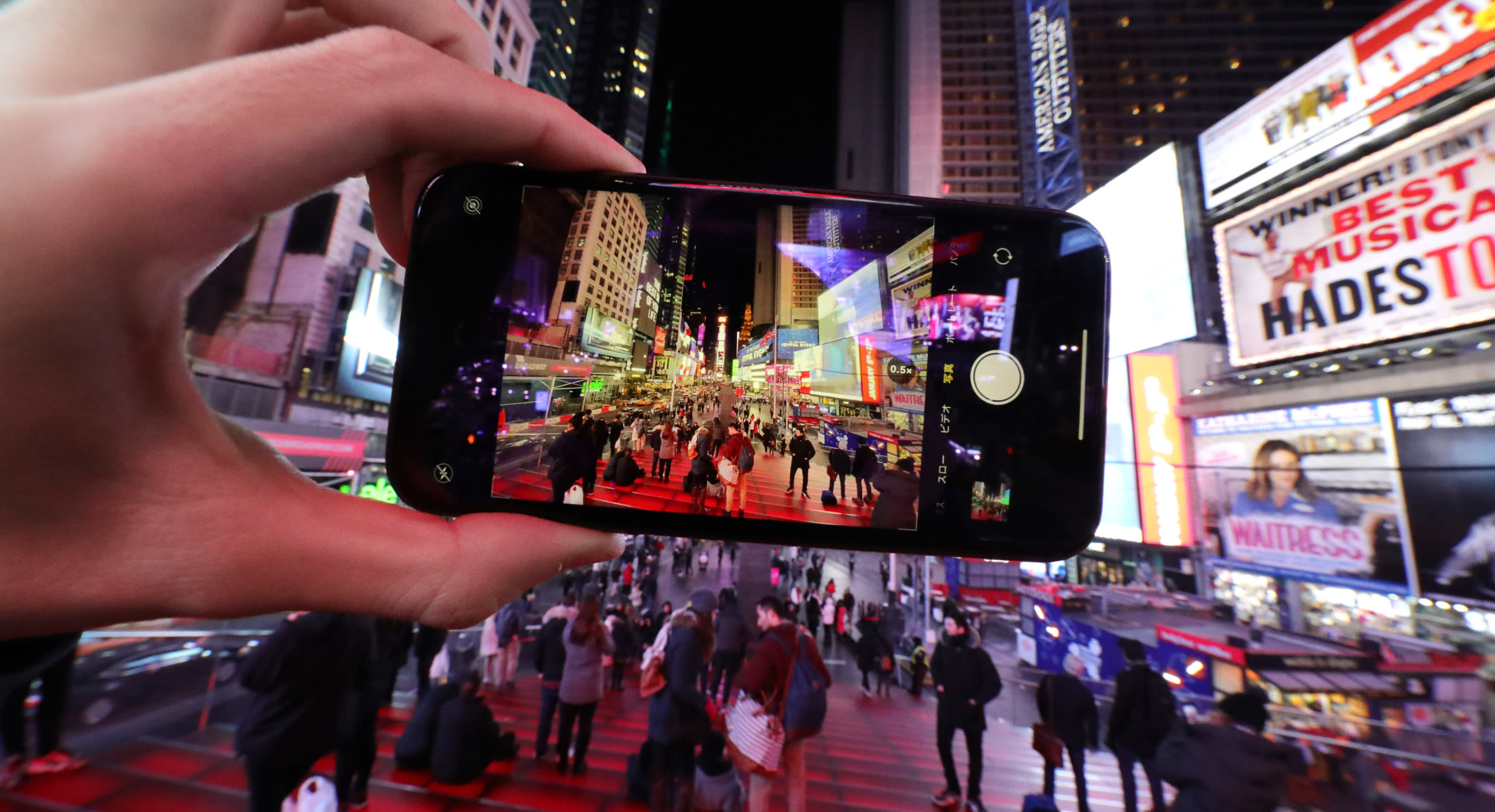 The shift toward IT and away from manufacturing is a game changer for capitalism. (Photo by Yuki Nakao)

TOKYO -- On a street near Google's offices in California, rusting old camper vans are parked in a row, serving as makeshift homes. Some would argue they are also symbols of capitalism gone awry.

The success of Silicon Valley is undeniable. The likes of Google, Apple and Facebook have, well, capitalized on free-market capitalism to build empires that span the globe. The world's top technology talent flocks to the area for high-paying jobs.

But others have been priced out of the home market and into the campers. Some are factory workers. Some work in restaurants. They cannot afford to live anywhere else. "I had no other choices," said Mark Bonner, a 50-year-old residing in one of the vans.

Bonner and his neighbors are not the only ones being left behind by the digital revolution.

More than 400 years since the British and Dutch East India companies became the first publicly traded companies, and three decades since the fall of the Berlin Wall appeared to end the great ideological struggle between capitalism and communism, pressure is building toward another economic watershed. A combination of tech behemoths, growing wealth disparities, climate change and rampant protectionism is calling into question the very nature of capitalism itself.

It was not supposed to be this way.

Adam Smith, the father of modern economics, posited in his 1776 book "The Wealth of Nations" that the pursuit of individual and corporate self-interest enriches society as a whole by way of an "invisible hand." It was a powerful argument for free competition -- the foundation of capitalism.

And though there have always been individuals who struggle to make ends meet, the ensuing centuries bolstered Smith's case. The Industrial Revolution brought mass production of goods, driving economic growth. The creation of manufacturing jobs spawned a middle class that supported consumption. Most members of society enjoyed at least some of the fruits of economic development.

Consider the past few decades alone. The World Bank says that in 2015, 10% of the world's population was living in poverty on $1.90 or less per day -- a significant drop from 36% in 1990. Much of that progress was fueled by capitalism in the East and emerging nations. 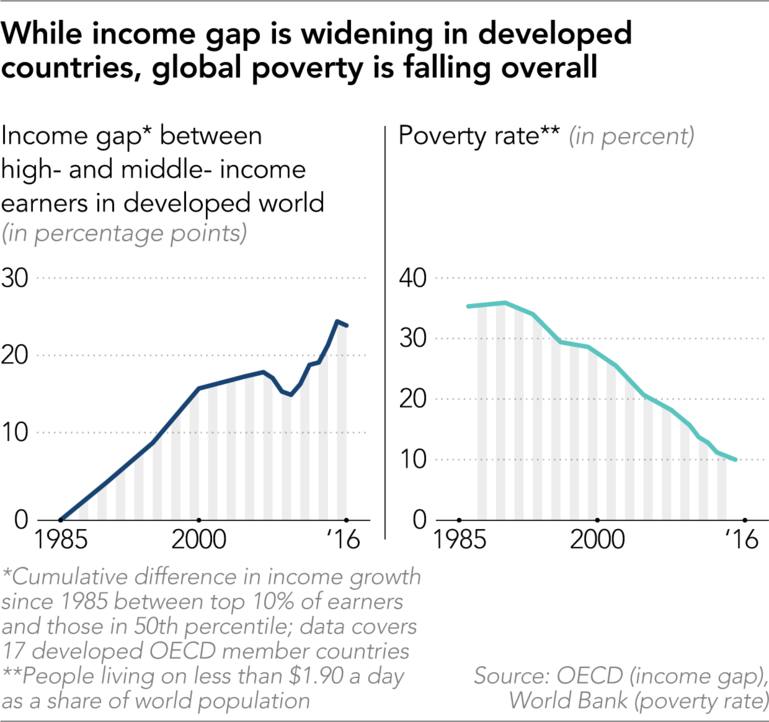 The digitalization of economies, however, has increased the value of knowledge and data while decreasing that of physical labor. The IT sector needs only a relative handful of workers with advanced skills to control artificial intelligence and other cutting-edge technology.

Society, overall, is starting to lose its ability to create employment.

The International Labor Organization projects that the global number of manufacturing workers will decline by about 18 million over the five years to 2022. The polarization of income is also expected to accelerate. In the 17 advanced members of the Organization for Economic Cooperation and Development, income growth among the richest 10% has exceeded the rise in the median income by over 20 percentage points since 1985.

Meanwhile, the market value of the world's top 10 tech companies' digital business, including Apple, has reached about $6 trillion. That surpasses Japan's nominal gross domestic product of about $5.2 trillion. The staggering growth of just a few companies has stirred concern about an extreme concentration of power and wealth. Other cracks are forming in capitalism's foundations.

Ikea, the world's largest furniture maker, declared in November that it will become a "carbon positive" business by 2030. The Swedish company intends to use renewable energy, such as solar and wind, for all of its power. Not only does it intend to reduce carbon emissions to zero, but it will also promote afforestation.

The campaign is expected to cost Ikea at least 200 million euros ($222.4 million). In the capitalist system, companies are supposed to pursue profit for their stakeholders. But the privately held Ikea is choosing to invest a huge sum for the sake of the environment, calling into question the conventional capitalist wisdom.

The dangers of climate change have, arguably, made it impossible to expand economic activity through the single-minded pursuit of profit. The Business Roundtable, a group of chief executives of major American companies, has gone so far as to redefine the purpose of a corporation, saying the delivery of value to shareholders is no longer their principal objective.

Then there are the tensions of globalization and the rise of Chinese state capitalism, which have shaken the world economic order.

China's nominal GDP reached $13.4 trillion in 2018, up 44-fold from 1980 and equal to 65% of U.S. GDP. This has lifted millions out of poverty, but this success story has also undermined the rules of international competition, since it was achieved in part through forced transfers of technology and huge government subsidies.

With China hot on its heels, the U.S. under President Donald Trump has resorted to a trade war. In doing so, the U.S. seems to have forgotten the lessons of the 20th century -- that protectionism and trade conflicts can contribute to armed conflicts.

Of course, this is not the first time that capitalism and free markets have raised doubts. Harsh working conditions following the Industrial Revolution inspired Karl Marx's Communist Manifesto in 1848. After World War II, even the capitalist bastions of the U.S. and Europe nationalized key industries and toughened regulations.

"The first thing to remember about capitalism is that it is pretty frequently in crisis," British historian Niall Ferguson told the Nikkei Asian Review. But every time capitalism has appeared to face an existential crisis, it has bounced back.

Capitalism, in one form or another, now covers 7 billion people. How will we overcome these new challenges?

This is the first part in a special Nikkei series looking into the future of capitalism.