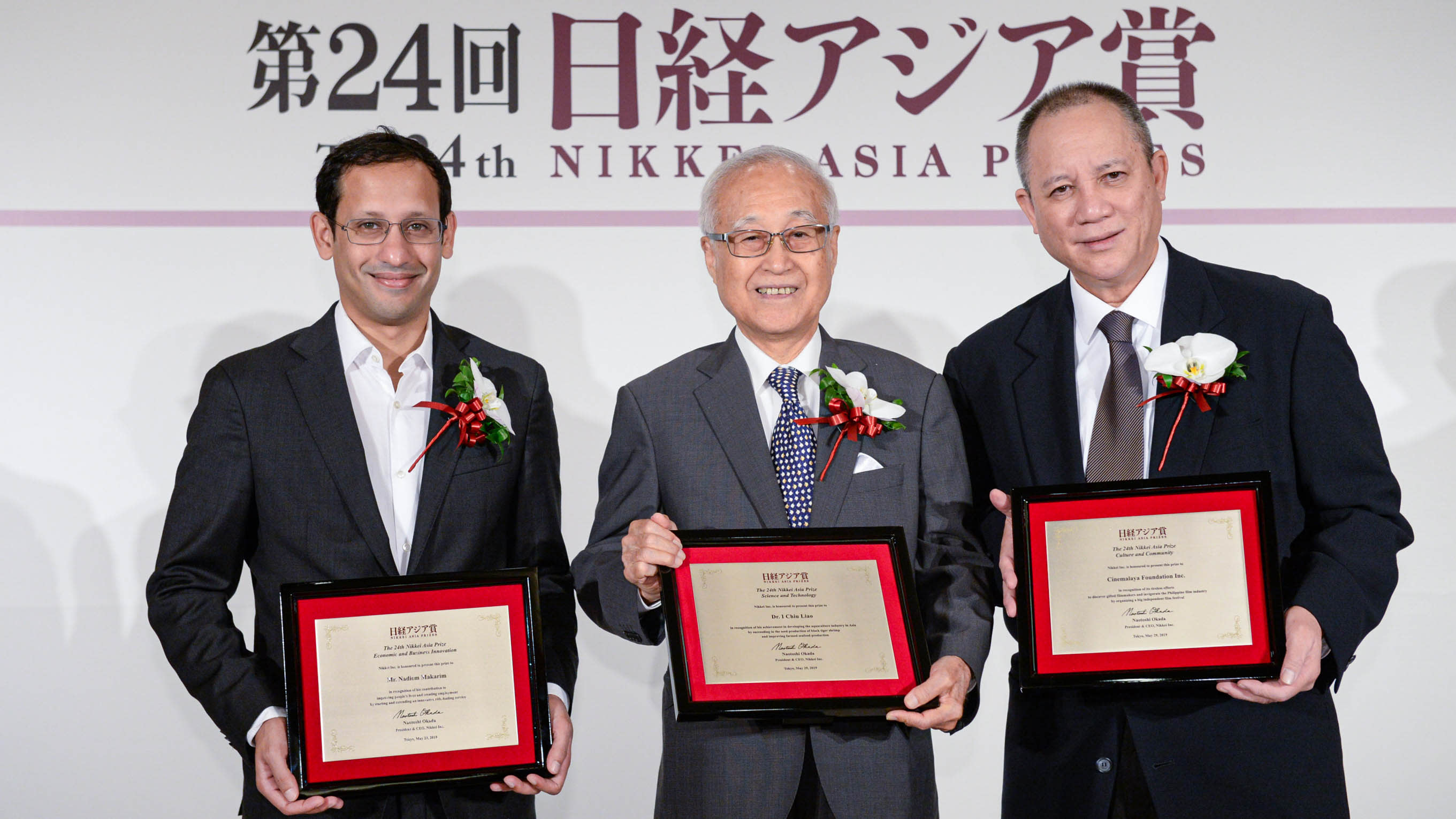 TOKYO -- The Indonesian founder of a motorbike taxi ride-hailing service, a Taiwanese prawn farming pioneer and a Philippine organization that revived the country's film industry were honored with awards in Tokyo on Wednesday.

The Nikkei Asia Prizes are given to individuals and groups in Asia that have made significant contributions to the region's development. This year marks the 24th time the prizes have been presented.

A prize for innovation in business was awarded to Nadiem Makarim, the founder and chief executive of Indonesian ride-hailing service Go-Jek.

"We have focused on using technology to improve the lives of people in Southeast Asia," Makarim stressed in his acceptance speech.

Makarim founded Go-Jek in 2010, when he returned home after studying social entrepreneurship at Harvard Business School in the U.S., with the aim of giving "rise to more income earning opportunities that did not exist before." He saw an opportunity to connect "businesses that have time, but no money, with consumers who have money but are short on time."

The service has not only contributed to boosting the quality of consumers' lives, but also to improving those of many motorbike drivers, who have been able to secure stable incomes.

"Many many people ask me whether Go-Jek is for profit or social enterprise, and my response is, in today's age, what is the difference?" said Makarim. "In today's world, you must have social impacts and you must make a profit at the same time. That is not a choice anymore."

He said this is especially true "when you are coming from countries that are emerging, that have poverty, that have a structural inefficiency."

Today, Go-Jek has "2 million driver partners and 300,000 merchants," according to Makarim. The company has received international recognition as one of 19 so-called "decacorn" companies worldwide that have reached a valuation of more than $10 billion.

The company has expanded the scope of its business to financial services. "There is plenty of room to grow across all our services and explore new areas where we can bring greater efficiency," said Makarim.

Taiwanese professor I Chiu Liao from the National Taiwan Ocean University won the prize for science and technology, in recognition of his pioneering work in the prawn farming industry.

Having succeeded in farming giant tiger prawns for the first time in history in 1968, he has since contributed to the development of the entire prawn farming and fisheries industry in Southeast Asia and to significantly boosting the earnings of farmers working in this area in developing countries.

"Now people call me 'Asia's father of prawn farming,' which for me is the greatest honor," said Liao.

Liao studied fisheries science as a graduate student at the University of Tokyo, where he learned the importance of thoroughly studying animals and their living environment. His work has paved the way for people all over Asia to be able to access affordable seafood.

He has helped establish systems to culture various fish, such as striped mullet and Tilapias. In 2014, he received the Order of the Rising Sun from the Japanese government in recognition of his achievements. Laio said, "I will keep striving to contribute more to Asia's development."

The winner of the prize for culture and community was the Cinemalaya Foundation in the Philippines, a nonprofit film organization established in 2005.

Founded by three movie industry talents -- Laurice Guillen, Nestor Jardin and Antonio Cojuangco -- the name Cinemalaya is a portmanteau of Filipino words reflecting the founders' belief that "cinema, cine, could enliven consciousness, malay, by telling stories in a free and independent manner, malaya." The organization has striven to shed a new light on the country's film industry, which had been viewed as dead following a huge decline in production.

To revive the industry, the organization set up the country's first large-scale digital film festival, known as the Cinemalaya Philippine Independent Film Festival. Cojuangco recalled that "by its third year, Cinemalaya had grown its audiences threefold and produced more films that made it to international festivals." This year will mark its 15th anniversary.

Over the years, the festival introduced nearly 200 directors and screened 300 feature-length and short films. Many gifted filmmakers have been discovered thanks to the foundation's endeavors.

Cinemalaya films "dared to tackle narratives, characters and subject matter often deemed risky, volatile, esoteric and therefore non-bankable by commercial standards," said Cojuangco. Their films have told the stories of a wide variety of people, such as a gay senior citizen and a young Filipino boy living as a migrant overseas.

"In this age of fake news and the weaponizing of social media, we offer our festival as an alternative space for truth telling," stressed Cojuangco.

The Nikkei Asia Prizes were created in 1996 to commemorate the 120th anniversary of Nikkei's Japanese newspaper. Past winners include Manmohan Singh, who won in 1997 before becoming India's prime minister, and Bangladeshi Muhammad Yunus, awarded in 2004, who went on to receive the 2006 Nobel Peace Prize for his work on reducing poverty and pioneering microfinance.