The biggest events in the week ahead The Rugby World Cup kicks off on Sept. 20 in Tokyo. (Kyodo)

Good morning! Welcome to Nikkei Asian Preview, a list of the most important business, economic and political events happening in Asia each week.

Nissan Motor CEO Hiroto Saikawa steps down today, just a week after the board surprised the 65-year-old executive by asking him to resign. The company has drawn up a list of 10 candidates to replace Saikawa, who came under fire for receiving an improperly inflated bonus. A permanent replacement is expected to be named by the end of October. Until then, Chief Operating Officer Yasuhiro Yamauchi will serve as acting CEO.

The new chief will need to restore the relationship with alliance partner Renault, which has been strained since the arrest of former Renault-Nissan Chairman Carlos Ghosn in Japan last November. The embattled Japanese automaker is also struggling with declining global sales, and it plans to cut its payroll by 12,500 by March 2023.

South Korea will formally remove Japan from its list of trusted trade partners as soon as this week following a similar step by Japan last month, a sign that a spat that began over historical issues is still far from settled.

All eyes in Taiwan are on Foxconn founder Terry Gou, who has until today to announce whether he will run for president as an independent for the 2020 election. If he runs, Gou, who dramatically quit the opposition Kuomintang last week, would challenge President Tsai Ing-wen and the Kuomintang's presidential nominee, Kaohsiung Mayor Han Kuo-yu. The Chinese tech giant will kick off its three-day Huawei Connect event in Shanghai, where it will showcase its new technology and corporate strategy. (Read more in our deep dive into Huawei.) A day after that event wraps up, Huawei will unveil its latest smartphone, the Mate 30, in Munich, Germany.

The Mate series is Huawei's line of premium phones and often viewed as a challenger to Apple's iPhone. In a potential setback for Huawei, the Mate 30 will not come with popular Google apps such as Google Map, YouTube, and Gmail due to Washington's restriction on U.S. tech exports to the Chinese company.

The Bank of Japan will conclude its two-day policy board meeting amid growing pressure to follow the easing examples set by its U.S. and European counterparts. Its decision will come today. 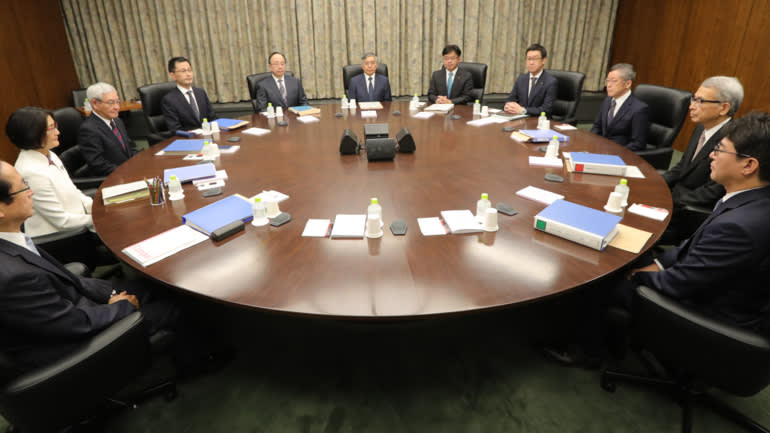 Bank of Japan Gov. Haruhiko Kuroda will likely be feeling some pressure at the next policy meeting. (Photo by Yuki Nakao)

China's memory chip makers will gather in Shenzhen today at the Flash Market Summit. The trade war has intensified China's push to build its own NAND flash memory factories and reduce its dependence on foreign technology. No Chinese NAND flash memory chip maker can compete with the likes of Samsung, Toshiba and Micron, but Beijing is banking on state-owned Yangtze Memory Technologies. The company expects to begin mass production by early next year, potentially aggravating a global supply glut and dragging down memory chip prices even further.

The American Chamber of Commerce in China hosts its Technology and Innovation Summit in Beijing, a week after its that business leaders are jittery about the trade war's impact on their business prospects. Among the scheduled speakers is Alain Crozier, CEO of Microsoft China, who will discuss the shift in business models as multinationals in China adopt digital technologies.

Land of the rising scrum

Asia's first Rugby World Cup kicks off in Japan on Friday with the hosts taking on Russia in Tokyo. More than half a million foreign fans will descend on the country in the coming weeks for the nearly sold-out event.

While the tournament is expected to be a success both on and off the pitch, the question is whether a short-term boost in popularity can propel the game -- which is still a niche sport in Asia -- into the mainstream across the region.