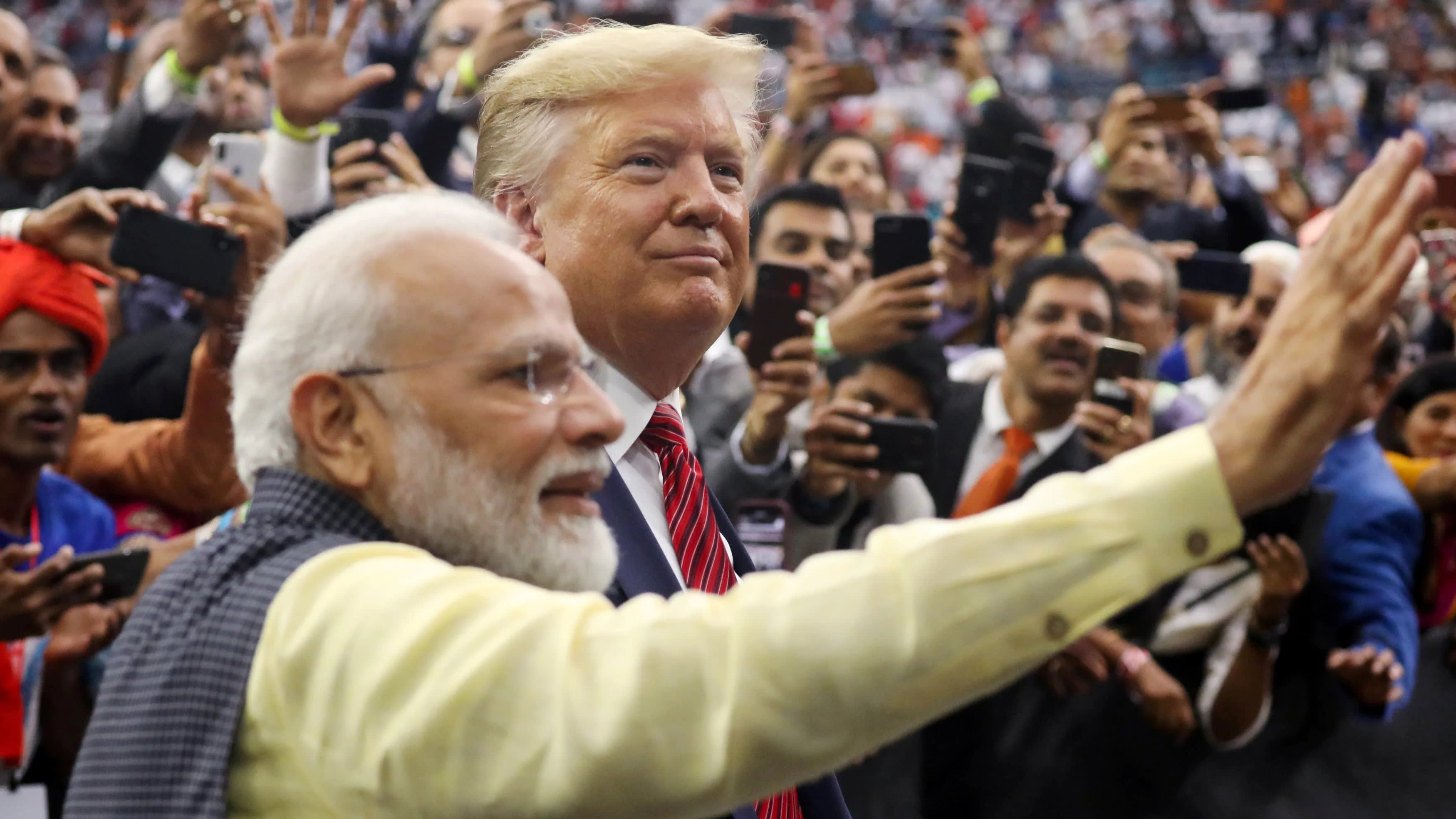 This will be a big week in Beijing, where officials are expected to postpone China's annual parliamentary gathering due to the coronavirus outbreak. The decision will come amid criticism that the ruling Chinese Communist Party has mishandled the health crisis. Delaying the National People's Congress's annual two-week session could have knock-on effects for President Xi Jinping's state visit to Japan scheduled for this spring.

Companies in the tech and tourism industries are scheduled to announce full-year results this week that should give clues as to just how long supply chains in China will be disrupted by the virus -- and how far travel demand has fallen.

The National People's Congress Standing Committee is expected to officially postpone the annual full session of the congress, which had been scheduled to start on March 5, due to the coronavirus outbreak. The committee is also expected to adopt new controls on the trade and consumption of meat from wild animals, widely thought to be a factor in this outbreak as well as that of SARS.

Hundreds of thousands of Chinese migrant workers will complete 14-day quarantines, allowing them to return to work at factories in Shanghai, Zhengzhou, Shenzhen and other cities. Manufacturers have been hit by labor shortages since the Lunar New Year. 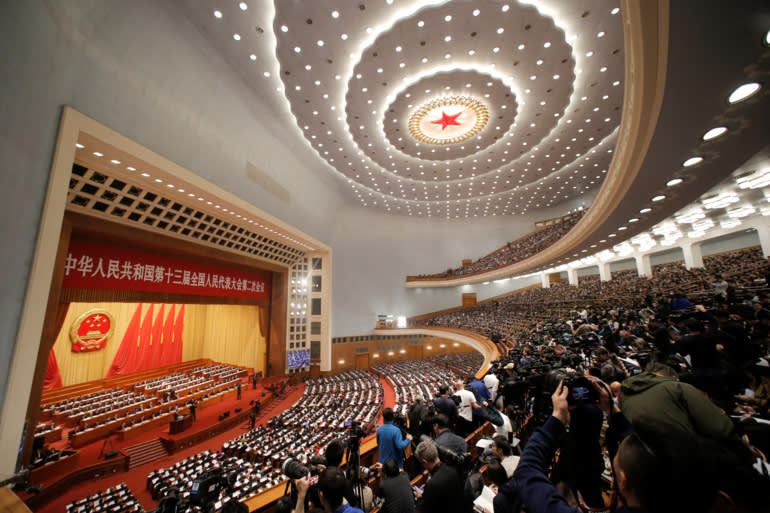 Delegates and journalists attended last year's National People's Congress at the Great Hall of the People in Beijing.   © Reuters

U.S. President Donald Trump will land in India on Monday for a two-day state visit. Trump and Prime Minister Narendra Modi will discuss a slew of trade issues, including tariffs and greater market access for farm products.

Also on the agenda: deepening strategic defense cooperation. Though a comprehensive trade deal will likely remain elusive, some big-ticket defense pacts are expected to be signed, including the $2.6 billion procurement of 24 Lockheed Martin multi-role helicopters for the Indian Navy.

The visit will be a prime opportunity for Trump to woo the influential Indian-American community back home ahead of the presidential election in November.

Days after its rival Samsung unveiled its second foldable screen phone, Huawei is slated to launch a new generation of the foldable Mate X in a recorded video from Barcelona, which was forced to cancel the Mobile World Congress amid the coronavirus outbreak.

Why it matters: For more than a year, Huawei and Samsung have been locked in a race to develop foldable smartphones, the biggest development in smartphone design since Apple introduced the iPhone in 2007. The world's two largest smartphone makers are hoping the new form will revive the declining smartphone market.

A wrench in Huawei's plans: Huawei faces production bottlenecks due to the coronavirus outbreak in its native China, as well as uncertainties over access to U.S. technology.

Like many in the telecom industry, Qualcomm, the world's largest mobile chipmaker, had hoped to promote its wares at the now-canceled Mobile World Congress. Instead, Cristiano Amon, Qualcomm's president, will have to make do with an online conference to showcase the company's 5G chips, including the Snapdragon X60 5G modem chips.

For the first time in 15 years, Hong Kong is bracing for a budget deficit as the economy weathers the coronavirus outbreak and a slowdown from the monthslong anti-government protests. The retail, tourism, and food and beverage industries are among the hardest hit. Unemployment is on the rise in those industries.

What may be in the budget: Businesses are urging the government to introduce bolder stimulus measures, including business subsidies and cash handouts to citizens to encourage consumption.

Prime Minister Mahathir Mohamad is expected to announce a stimulus plan to rejuvenate an economy burned by its reliance on Chinese trade and investment, which is believed to have slowed.

Low-cost carrier AirAsia Group is expected to post a net loss for the fourth quarter of 2019, in part due to restrictions that have been placed on travel to and from China. The Malaysia-based airline and its affiliates, Thai AirAsia and AirAsia Philippines, have significant operations in China, Hong Kong and Macao.

The Bank of Korea is expected to keep its key rate unchanged at a record low of 1.25%, but investors are betting on another rate cut soon as the coronavirus outbreak weighs on Asia's fourth-largest economy.

Apple executives typically share little about new products at the annual shareholders meeting, but this year's event may hold more interest than usual. The company said last week that it will miss next quarter's earnings target as the coronavirus freezes its supply chains. The event will be held at 9 a.m. California time, 2 a.m. Japan time.

Japan's Mos Burger opens its first branch in the Philippines this week, taking a bite of a fast-growing market dominated by McDonald's and homegrown fast-food group Jollibee.

Mos, which plans to open 50 branches by 2027, is the latest foreign restaurant chain to expand in the Philippines. Others that recently entered the market include U.S. burger chain Shake Shack, Popeyes fried chicken and Panda Express, which serves American-style Chinese cuisine.

Nasdaq-listed Baidu Inc. will report its October-December earnings in the Asian morning. The Chinese search engine company suffered a loss of 6.37 billion yuan ($906.5 million) in the previous quarter, largely due to a one-time charge. Investors will be watching if Baidu has managed to shrug off the red ink this time and how the Beijing-based company will weather macro challenges such as the sluggish economy and the coronavirus outbreak.

Yang's meetings with Japanese government officials are presumably to make arrangements for an April state visit -- or to postpone it, as the persistent epidemic may require China's leadership to stay put in Beijing.

State visits to Tokyo by Chinese leaders have historically been highly orchestrated and meticulously negotiated, as the foreign treatment of the country's heads of state are critical optics for the party. Read our inside look at how the state visit has become Japan's biggest diplomatic bargaining chip with China.

More: In search of a friend, China dials up pro-Japan rhetoric One month of Wuhan lockdown

Sunday marks a month since officials in Wuhan, the epicenter of the coronavirus outbreak, closed transport links out of the city and imposed a quarantine on 11 million residents.

The death of four people in a single family earlier this month highlighted the risks of the home quarantine policy, which was lifted on Feb. 2.

In case you missed it: NAR reporter Nikki Sun's story on the intensifying worries among Chinese small business owners that they could run out of cash if the coronavirus drags on for months. Shuttered: Shops remain closed in Wuhan as part of efforts to keep the virus from spreading.   © Reuters